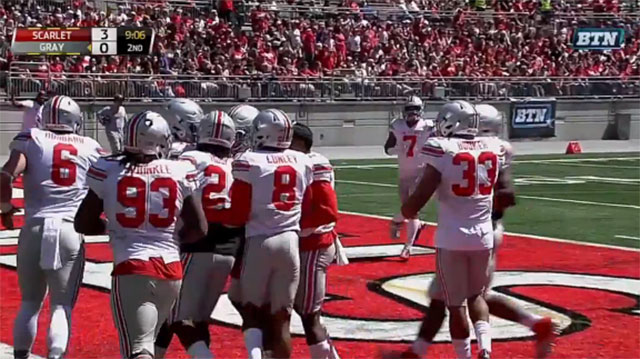 Ohio State and Urban Meyer won?t lack for motivation in 2016. The program failed to repeat as national champs in a largely unfulfilling season. Heck, the Buckeyes didn?t even win the Big Ten East despite having a roster loaded with 12 NFL draft picks.

Now, Meyer faces some big challenges next season as he looks to get back on top in the Big Ten. Yes, he will have some building blocks for his fifth squad, headed by QB J.T. Barrett. But questions loom.

A big one: Who will be the running back with Ezekiel Elliott gone? Below is my Ohio State to-do list.

1. Develop the secondary. This is the biggest area of concern, as three new starters are needed with Eli Apple, Tyvis Powell and Vonn Bell gone. The only starter back is corner Gareon Conley. Malik Hooker looked good in the spring and has star potential at safety. Erick Smith and Cam Burrows will be factors. There is plenty of athletic ability and options for the staff to build a good secondary. Another wild card: The departure of co-DC/secondary coach Chris Ash, who took the Rutgers job.

2. Hone the wideout corps. There is a lot of potential on this unit. Now, can it turn that promise into production? Torrance Gibson is one to watch, as he flashed some ability in the spring after arriving on campus as a quarterback before making the transition to wideout. Can he be a deep threat with Michael Thomas and Braxton Miller gone? Noah Brown and Corey Smith need to be leaders. Others who need to be difference makers are Curtis Samuel, Terry McLaurin and Parris Campbell, and watch Johnnie Dixon and James Clark. Youngsters Austin Mack and K.J. Hill are exciting. Mack could be a stud true freshman after arriving early.

3. Fortify the offensive line. Gone from the line are All-American left tackle Taylor Decker, right tackle Chase Farris and center Jacoby Boren. The 2016 front will be anchored by fifth-year senior Pat Elflein, who is sliding over from right guard to center, and Billy Price at left guard. Jamarco Jones, who played behind Decker the last two seasons, is the likely starter at left tackle. Isaiah Prince, who played little as a freshman last year, appears to be the top candidate at right tackle. Early enrolled freshman Michael Jordan earned raves from Meyer and offensive line coach Greg Studrawa this spring. Yes, the 6-7, 316-pound Jordan could at guard. A true freshman starting offensive lineman at Ohio State? Yep.

4. Find a RB. How do you replace Ezekiel Elliott, the No. 4 pick in the NFL draft? You don?t. Bri?onte Dunn will get the first shot. Keep an eye on redshirt freshman Mike Weber and true freshman Antonio Williams. Weber could be a special player.

5. Replenish the defensive line. Talent like Joey Bosa, Tommy Schutt and Adolphus Washington is gone. Davon Hamilton had two sacks and Jason Cornell also had a pair in the spring game. And the staff likes Mike Hill and Dre?Mont Jones. Jalyn Holmes and Tyquan Lewis need to be leaders and playmaker. There is a lot of talent in this group, but it must develop quickly. In the Big Ten, if you can?t stop the run, you have no shot to win.

I've also looked at other teams – find those links below, too.