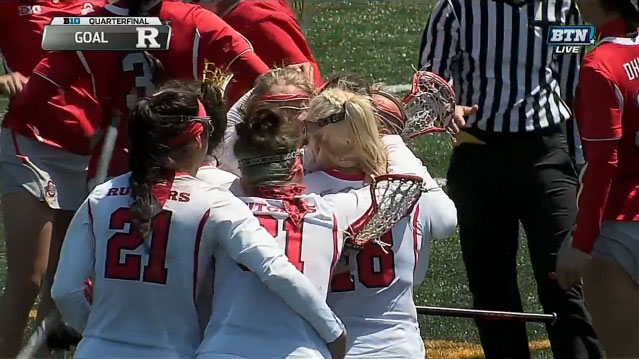 No. 4 Rutgers seed will take on No. 1 seed Maryland in the first of two semifinals games on Friday. The Wildcats will play against No. 2 seed Penn State. All of Friday's games air live on BTN and online via BTN2Go. Full schedule with links below.

For Rutgers, Turturro got her second hat trick of the season and scored the final two goals for the Scarlet Knights in the game. Rutgers led 10-8 with less than five minutes to go but Ohio State scored back-to-back in 58 seconds to tie the game. Rutgers forced Ohio State into 17 turnovers for the game. Read more at ScarletKnights.com.

For Northwestern, the Wildcats jumped out to a 13-3 first-half lead and never looked back as 12 players scored goals. Selena Lasota and Kaleigh Craig each score three apiece. Read more at NUSports.com.