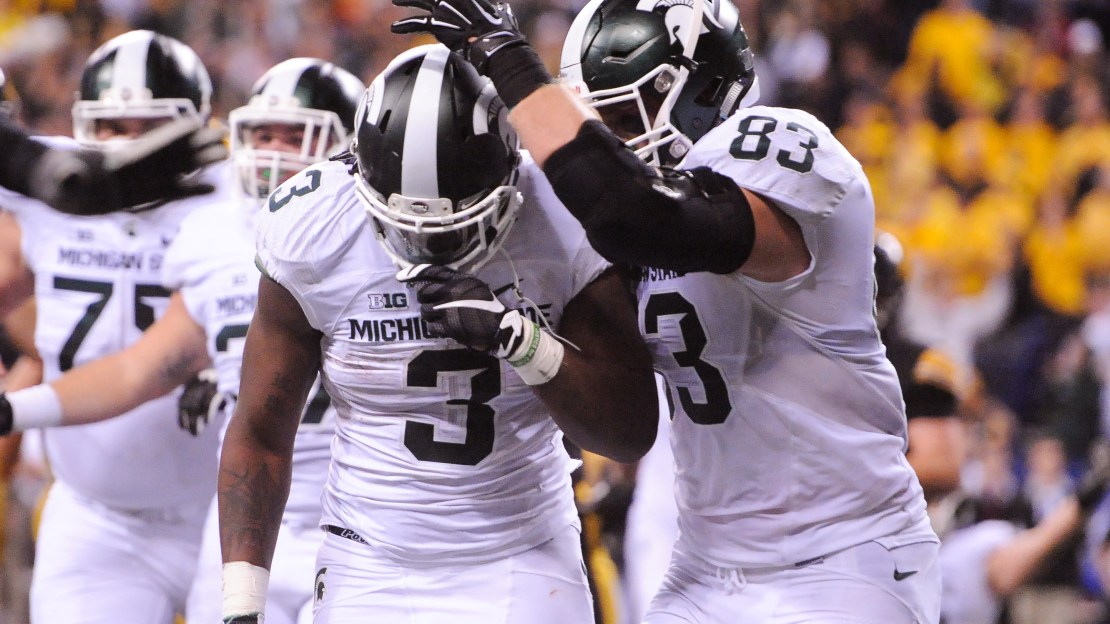 GoldAndBlack.com has a good Q&A with Michigan transfer Spike Albrecht, who will finish his career at Purdue. The Indiana native has experience and savvy that no doubt will help the Boilermakers at a point guard spot that hasn?t exactly been a strength under Matt Painter.

Michigan State is the only program in the country to finish in the top 6 of the AP Top 25 poll each of the past three years, but it's beginning to look like it will start the 2016 season outside of the top 10. Mlive.com notes that College Football News has the Spartans ranked No. 14 in its list of all 128 FBS schools. And how about this kick in the gut: MSU isn?t part of ESPN?s seven prime-time games involving Big Ten schools. Ohio State will be featured four times, Michigan twice. Wisconsin twice and Nebraska twice.

All of this will serve as good motivation for the Spartans, right? The chip on the shoulder just got bigger.

After nine years without deposed mascot Chief Illinwek, Illinois is looking for a new mascot.

The plan is not to replace the Fighting Illini nickname that the school's teams now use, campus spokeswoman Robin Kaler said. But the school wants to select a mascot to be on the sidelines and at events. Wilson acknowledged the process could include "challenges." Many students and university graduates would like to see Chief Illiniwek return, wearing Chief-themed shirts to sports events and chanting "Chief!" This probably won?t happen.

This Twitter hashtag aside, I have no idea what personification of the school Illinois will come up with. I just hope it is good and not like Ribbie and Roobarb.

Good podcast on Pennlive.com with Dustin Hockensmith and Newday?s Bob Glauber that looks at new Jet Christian Hackenberg. I am fascinated to see how Hackenberg performs. I think he?s in a good situation with Ryan Fitzpatrick still a free agent and Geno Smith primed to leave.

Still yearning for more NFL Draft stuff? Cleveland.com has 11 unforgettable moments from the 2016 draft in slide show format. Ezekiel Elliott showing up on the red carpet with a cut-off dress shirt was sweet.

Nice to see former Indiana guard Michael Lewis land an assistant coaching job with Nebraska. He was at Butler.

On the gridiron in Lincoln, it looks like touted QB Patrick O?Brien will redshirt.

"A lot of times, you get a young guy … It just takes a long time for them to really be comfortable going into a game unless they are a clear-cut starter," OC Danny Langsdorf told the Lincoln Journal Star. "So, I think what you'd like to do is keep developing (O'Brien) and not just have to throw him in there and have him take his lumps."

So, that means senior Ryker Fyfe will backup senior Tommy Armstrong with sophomore AJ Bush also fighting for time. The race to QB this team in 2017 will be VERY interesting with Armstrong and Fyfe gone.

Good column from the great Brendan F. Quinn of Mlive.com, who says instead of building off the 2013 Final Four that Michigan is rebuilding from its 2014 recruiting class that didn?t pan out.

John Beilein is left with the remnants of some flawed science. His 2014 recruiting class — one that filled six scholarships and was to swivel the program to the future — has frayed and fragmented. As of Tuesday morning, Muhammad-Ali Abdur-Rahkman and D.J. Wilson are the lone remnants. Aubrey Dawkins, Ricky Doyle and Kameron Chatman have all transferred. Austin Hatch is in a non-playing role.

Watching this Big 12 soap opera play out is fascinating. Whichever schools the league would add wouldn?t figure to add much juice. So, why do it? Is having Cincinnati, Memphis or UConn REALLY gonna improve the Big 12?s playoff chances? Come on. I think this league is doomed.

Look, let?s just have four, 16-team leagues with each conference champ getting a playoff berth. NO MORE COMMITTEES PICKING TEAMS! If the playoff goes to six teams, let a committee pick the two wild-card teams.