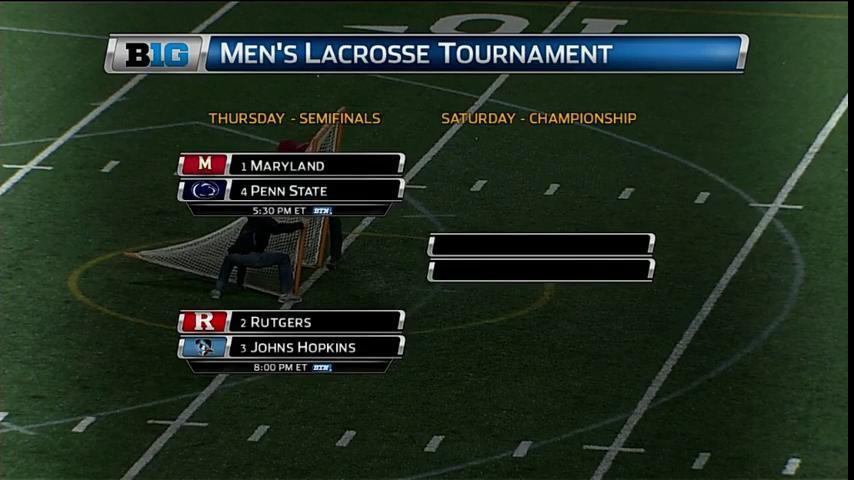 The Big Ten Men's Lacrosse Tournament field is set, so let the games begin. When last Saturday started we had three teams locked in with one spot up for grabs and a bunch of potential seeding scenarios. Penn State took some of the drama away by topping Michigan 14-9 and grabbing the fourth and final spot. Then Maryland drops Johns Hopkins 11-8 to sew up the top seed. In the nightcap, Ohio State upended Rutgers 12-10 but the Buckeyes fell short of the tourney having lost to Penn State 6-5 on April 3.

The action starts Thursday with both semifinals on BTN TV and BTN2Go. Maryland battles Penn State at 5:30 ET followed by Rutgers vs. Hopkins at 8 p.m. from Johns Hopkins' Homewood Field in Baltimore.

Let?s take a look at each matchup and break down what we can expect to see.

Forecast: Maryland enters the game on an 11-game win streak. The Terrapins might be the most balanced team in the nation. Offensively the Terps boast nine players who can score, including All-Big Ten honorable mentions Colin Heacock (32 goals, 5 assists), Matt Rambo (26 goals, 15 assists), and All-Big Ten first-teamer Bryan Cole (16 goals, 19 assists). On the defensive side Maryland only surrenders 7.79 goals per game, eighth best in the country. Matt Dunn and All-Big Ten selection Tim Muller anchor a sturdy unit in front of netminder Kyle Bernlohr (53 percent), an All-Big Ten First Teamer. This unit has got better and better as the season rolled on.

Penn State is a mere three goals away from being the No. seed in the tournament. One goal setbacks to Maryland, Hopkins, and Rutgers have them eager to reverse those fortunes. Nick Aponte (26 goals, 19 assists) has scored four goals in three straight games and earned All-Big Ten first Team notice unanimously. Freshman Grant Ament (19 goals, 34 assists) also garnered postseason conference recognition and is the QB of the offense. Goalie Will Schreiner (47 percent) has gotten better as the season has progressed. LSM James Burke and SSDMs James Chakey and Tommy O?Neill provide tough play and leadership.

Where the game will be won: The team that does a better job of taking care of the ball will most likely emerge victorious. Turnovers can really hurt, something Penn State has learned the hard way I the close conference losses. In the first meeting PSU led 8-4 in the 2nd quarter but committed several turnovers that led to Terp opportunities and allowed Maryland to get back in the game.

Maryland will need to control faceoffs and establish the Terp Tempo they like to play. That means extended possessions with a probing offense that thrives in the 5 vs. 5 and 6 vs. 6 settings. Maryland will also have to defend the Penn State attack coming from behind the cage by playing smart angles.

Penn State will look to push the pace and strike with early offense. They want a run and gun game. In settled situations the Nittany Lions will need to get the Maryland defense moving and will have to shoot wisely on Bernlohr. Defensively they will need to be disciplined and efficient on the slides. If you are overaggressive Maryland will pick your defense apart.

Forecast: This game features two of the most prolific offenses in the Big Ten and the country. Rutgers averages 12.64 goals per game, Hopkins 12.69. They rank 10th and 9th respectively in D1 lacrosse. The attack unit of Scott Bieda (26 goals, 32 assists), Jules Heninburg (38 goals, 18 assists), and Adam Charalambides (35 goals, 14 assists) combined for a staggering 18 points in the first meeting with the Blue Jays. Bieda was just named Big Ten Offensive Player of the Year while Heninburg grabbed first team notice and Charalambides took Freshman of the Year. LSM Zack Sikora (6 goals, 3 assists) is the best at his position in the Big Ten. Goalie Kris Alleyne (53 percent) has been hot and cold at times; when he is on he is a very good keeper.

The Blue Jays feature a great feeder-finisher combo in All-Big Ten first-teamer Shack Stanwick (18 goals, 34 assists) and Ryan Brown (36 goals, 14 assists). Wilkins Dismuke (22 goals, 3 assists) has been solid and steady as the third man on the attack line. At the faceoff dot Craig Madarasz (54 percent) has been on a roll as of late, while defender and All-Big Ten honorable mention Nick Fields brings an aggressive, hard-nosed approach to the back line in front of netminder Brock Turnbaugh (48 percent)

Where the game will be won: Goaltending. With two high powered offenses Alleyne and Turnbaugh will need to be up to the task. Both teams give up a decent amount of shots so saves become an even more critical element.

Rutgers will need some scoring support from the midfield. Players like Christian Trasolini (13 goals, 4 assists), Christian Mazzone (8 goals, 3 assists), and Jeff George (7 goals, 1 assists) need to play a bigger role. The Scarlet Knights will want to limit fouls as the Blue Jays have one of the better EMOs in lacrosse.

Hopkins will have to be whistle ready. In the first meeting Rutgers raced to an 8-3 lead at the half and never looked back. To this end the Blue Jays will need to slow down the three-headed monster of Bieda, Heninburg, and Charalambides at attack. The clearing game is also critical as the Jays cannot afford to give the Scarlet Knights any second chance possessions.