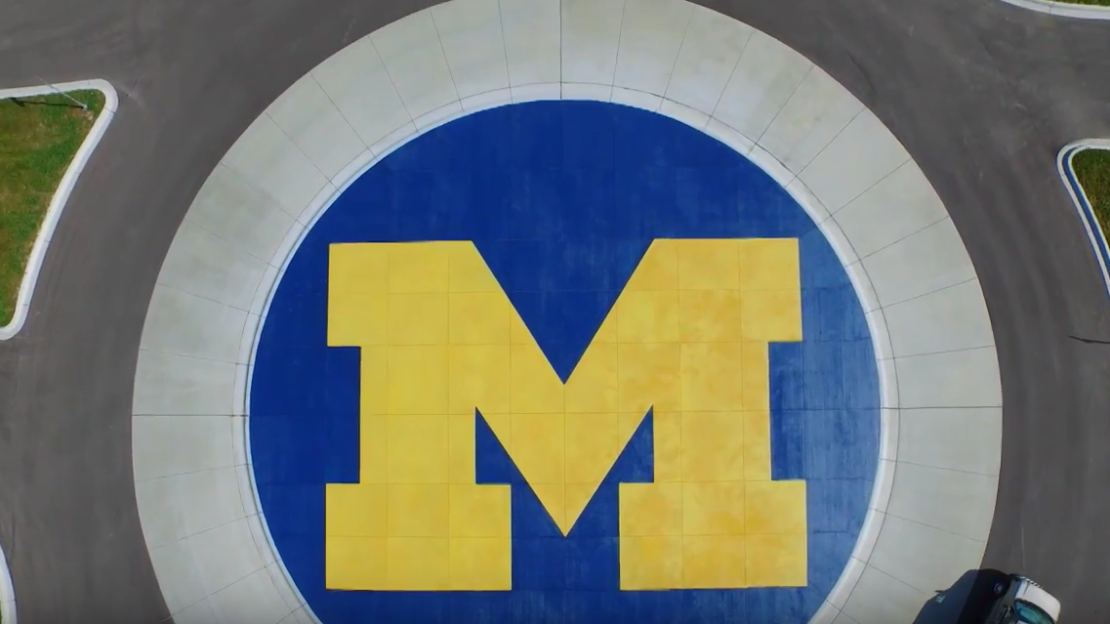 The car gradually moves forward, then picks up a bit of speed before turning left onto a gravel road. It slows down a bit as it passes over a railroad crossing, then makes a few more turns and lane changes as it maneuvers its way into downtown.

All of a sudden, a pedestrian darts out into the street from between two parked automobiles. The car brakes hard and avoids hitting the person, and after a few moments, each continues on their merry way, neither worse for wear.

This could be a scene from Anytown, USA, but it's not. This is the University of Michigan's Mcity. And the driver? It's a computer.

"Mcity is a unique facility for testing automated and connected vehicles," said Peter Sweatman, founding director of the Michigan Mobility Transportation Center. "What we've done is try to create what we see as the most challenging aspect of automation in the future, and that is a dense, complex, urban environment and the ability of vehicles to operate under those conditions."

Opened in 2015, Mcity is the first facility of its kind. The 32-acre proving ground, located just north of the university's campus, combines both urban and rural environments. Features include not only a mock city with simulated pedestrians and rail crossings, but also synthetic foliage canopies (with variable moisture content), a metal tunnel and a concrete overpass.

"We went to faculty across the university," he said, "engineering, urban planning, the law school, and said, 'What are the challenges in the future in terms of massive deployment of automated technology out on the real roads, and how can we create that?'"

While the idea of driverless cars tends to dominate the conversation about the future of automotive tech, Sweatman said Mcity is equally suited for testing what are known as connected vehicles. These are automobiles outfitted with technology that allows them to communicate with other vehicles (vehicle-to-vehicle, or V2V) as well as roadway features such as traffic signals, known as vehicle-to-interface (V2I).

"There is, for example, an application we call Electronic Brake Light," Sweatman explained. "You're in a traffic stream, there's some hard braking taking place several cars ahead of you, you can't even see the car, and you certainly can't see the brake lights. But your vehicle knows that hard braking is taking place."

One of the guiding principles of Mcity is the open culture of research promoted therein. Not only are corporations such as Ford using its asphalt laboratory to test their latest advancements, but researchers from across the university are getting in on the action, too.

[btn-post-package]"A faculty member had a personal experience on a motorcycle where he couldn't hear an ambulance siren," Sweatman said. "So he developed a kind of siren repeater to go inside a helmet. I happened to come out [to Mcity], and there were some ambulances running around and they were testing this great technology."

While Mcity is currently the leading automated- and connected-vehicle test course, Sweatman is quick to note that others are being developed across the country. And he sees that as a good thing.

"We're seeing lots of developments, other consortia being set up, other test facilities that are being prepared and made available," he said. "We think that's great, and one of the things we want to do is coordinate with those other facilities because it all helps to get this nationwide deployment going."