NFL Draft: Thursday's opening round all about the Buckeyes 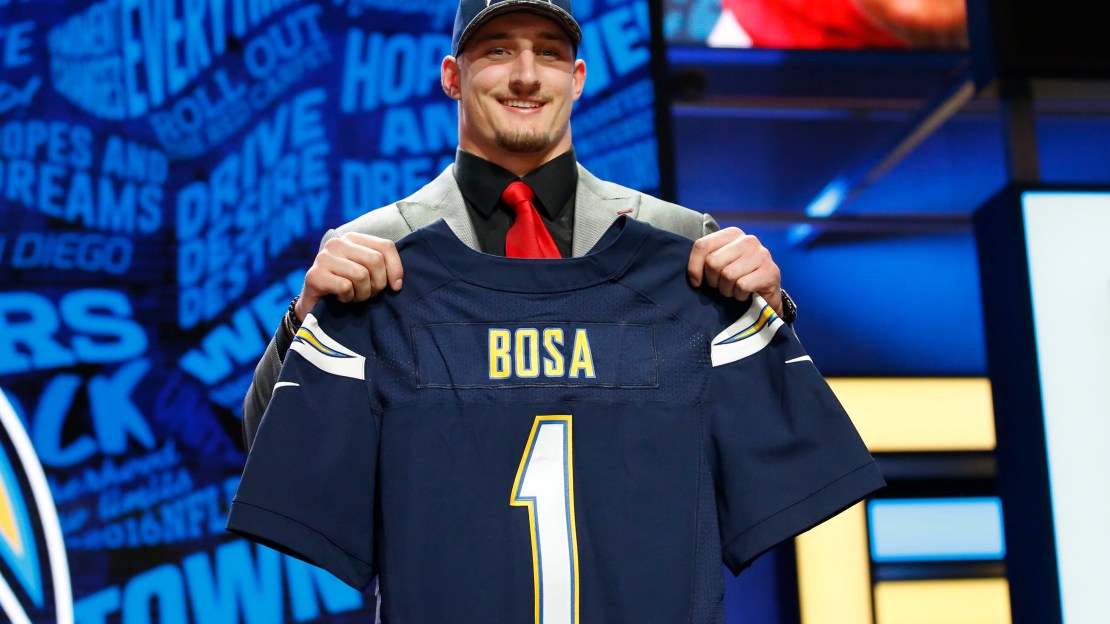 One by one, their names were called.

Defensive end Joey Bosa, No. 3 to the Chargers.

Running back Ezekiel Elliott, No. 4 to the Cowboys.

Cornerback Eli Apple, No. 10 to the Giants.

Offensive tackle Taylor Decker, No. 16 to the Lions.

Linebacker Darron Lee, No. 20 to the Jets.

And on it went for Ohio State on a glorious night. Check it out:

Three Buckeyes went in the top 10. The last school to do that was Oklahoma in 2010.

Five Buckeyes went in the first 20 picks. The last time that was done was in the 2004 draft by Miami (Fla.).

Tonight?s Scarlet and Gray jackpot was more proof of the Buckeye program?s ability to churn out top-notch NFL talent. In fact, few do it better.

By the time the final pick is made in the seven-round 2016 draft on Saturday, Ohio State may have as many as 15 players picked. It?s enough to make you wonder how the Buckeyes lost any games in 2015 and weren?t able to repeat as national champions. Alas, the Buckeyes stumbled, falling at home to Michigan State to cost Ohio State the Big Ten East crown and a shot to win the league championship and a ticket to the playoff. Still, tonight is a celebration of Ohio State and its prowess at churning out NFL talent.

Pundits felt Joey Bosa, Ezekiel Elliott, Taylor Decker, Darron Lee, Vonn Bell and Eli Apple all could be first-rounders, with Michael Thomas and Joshua Perry also having opportunities to slip into the opening round.

In addition to the five Buckeyes who got tabbed, the Big Ten saw one other player picked in the opening round: Michigan State OT Jack Conklin, who went No. 8 to the Titans. This was a strong display by the Big Ten, which could be primed for some halcyon days with Ohio State?s Urban Meyer, Michigan?s Jim Harbaugh, Michigan State?s Mark Dantonio and Penn State?s James Franklin inking some talented players in recent years who could end up being high picks in upcoming NFL drafts.

In other news, the Big Ten still hasn?t had a quarterback picked in the first round since Penn State?s Kerry Collins went No. 5 overall to the Panthers in 1995. The signal-callers who had the best shots to go in Round One were Michigan State?s Connor Cook and Penn State?s Christian Hackenberg. But, neither heard their named called tonight.

?Connor Cook in this draft, to me based on all the other prospects and the need at his position, should go in the first round,? Gruden said. ?I feel the same way about Christian Hackenberg.?

Cook led Michigan State to a 35-4 record as a starter the last three seasons, the most successful run for any Spartan QB. Hackenberg did his best work as a freshman under now-Texans coach Bill O?Brien. You wonder how differently Hackenberg would have developed had he been able to work under the tutelage of O?Brien the last two seasons. Still, his upside seems bigger than Cook?s, as Hackenberg is viewed by many as an unpolished gem with lots of upside, while Cook may already be about as good as he?s gonna get-which isn?t bad.

Ohio State?s Cardale Jones was the only other Big Ten quarterback who had any shot to go on Thursday. And, that was a mega longshot.

Since Collins went in Round One, 26 quarterbacks from the Big Ten have been taken in the NFL Draft. And some have gone on to have prodigious careers, including Wisconsin?s Russell Wilson, Michigan?s Tom Brady and Purdue?s Drew Brees. Maybe Iowa?s C.J. Beathard will end the Big Ten?s first-round quarterback drought next season. But on this night, it was all about Ohio State and its five picks.