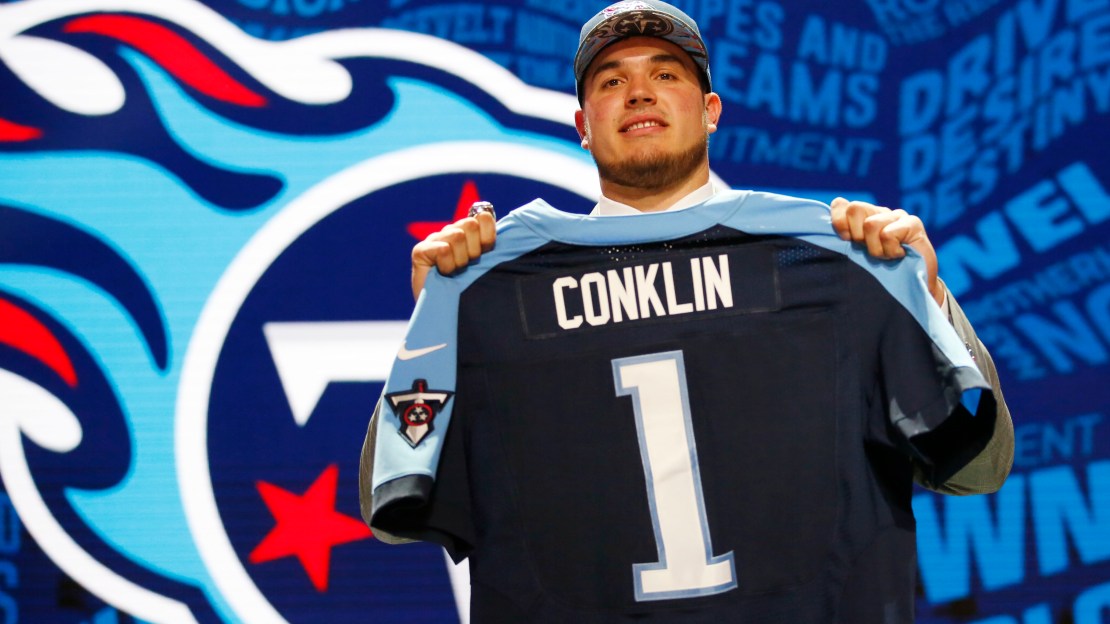 The 2016 draft kicked off in grand style for Ohio State last night, as the Buckeyes tied a program record with five first-round picks.

The five Ohio State players selected: Joey Bosa No. 3 to San Diego; Ezekiel Elliott No. 4 to Dallas; Eli Apple No. 10 to the New York Giants; Taylor Decker No. 16 overall to Detroit and Darron Lee No. 20 overall to the New York Jets. It looked for a minute like the Buckeyes might get to six or seven selections if receiver Michael Thomas and/or safety Vonn Bell could have slid into the first round. Six Buckeyes would have tied Miami's record for most first-round picks, done in 2004.

Seven Buckeyes would have been history.

The only other Big Ten player picked on Thursday was Michigan State OT Jack Conklin.

Conklin is a great story, a former walk-on who seems to be about as safe a pick as any in this draft. I have to think he?s a plug-and-play guy who will start for 10-15 years, healthy permitting.

Mention Michigan State QB Connor Cook to any number of draft pundits, and you?ll likely get any number of evaluations-from good to bad. He is the most polarizing man in the draft. I have to think we?ll see Cook get tabbed today in the draft. He won?t slip to Saturday, will he?

Is Penn State, Miami or Ohio State ?Linebacker U?? Cleveland.com looks into it. The best cases can be made for Miami and OSU. Sorry, Penn State.

Who doesn?t love an NFL draft steal? Exactly. Pennlive.com has a slideshow that looks at the biggest Nittany Lions draft steals. Yes, Greg Buttle is on the list. Loved that guy. Rich Milot is on here, too.I know who the busts are: Bruce Clark, Curtin Enis, Courtney Brown, I?m looking at you.

NJ.com reviews Rutgers? top draft picks since 2000 via this nifty slideshow. Is Leonte Carroo the next high pick? You betcha. I think he was the best wideout in the Big Ten last year. He just made big play after big play. He will get tabbed today. Book it.

No, Drew Ott won?t be back at Iowa. But he did get some good medical news.

After learning late at night on April 12 that his Iowa football career was over - that the NCAA had denied his final appeal for a medical redshirt - Ott was in scramble mode. Three days later, he went to the NFL Combine medical recheck. There, agent Neil Cornrich told HawkCentral.com that Ott received a positive evaluation about the surgically repaired ACL in his right knee: That he was on track to be healthy for the 2016 season.

?That?s the expectation of the Combine medical people, too, yes,? Cornrich told the Register on Wednesday.

Madison.com has a photo gallery of the 29 all-time Wisconsin first-round picks. Wisconsin finished spring drills last weekend. RB Corey Clement didn?t see much action, but he looks to back to his old self after injury ruined his 2015. The guy could be the top back in the Big Ten this fall.

A healthy Clement playing a full season could give Wisconsin a loaded backfield. Dare Ogunbowale, a converted defensive back, emerged to become the team's leading rusher last season with 819 yards on 194 carries. He's also turned into a team leader. Taiwan Deal gained 503 yards on 117 carries as a redshirt freshman. Alec Ingold, who is moving to fullback, was a goal-line specialist with six rushing touchdowns on 49 carries. Freshman Bradrick Shaw could also get carries. He was redshirted last season after arriving from Alabama as a promising prep prospect.

The great Steve Sipple of the Lincoln Journal Star has a look at new Illinois coach Lovie Smith. Will the Huskers beat Illinois this year? Last year?s loss in Champaign was a big gut punch for Nebraska.

No one knows for sure if Smith will succeed in Champaign. But this much is true: He has created a lot of hope and excitement. And, that?s important.

Remember when Derrick Green was the No. 1 RB in high school football? Well, now he has left Michigan and is shopping for schools. He recently visited Jacksonville State.

The great Dennis Dodd is bullish on the Big Ten.

Dodd says the Big Ten is back in a way that defies snark. For real. This is a hand-raising, flag-waving endorsement of the league that has failed only to annex Puerto Rico in expansion. What other conference wields power with both satellite camps and its satellite offices (in New York and Washington D.C.)? What other league has more population? What other conference has its own Harbaugh?