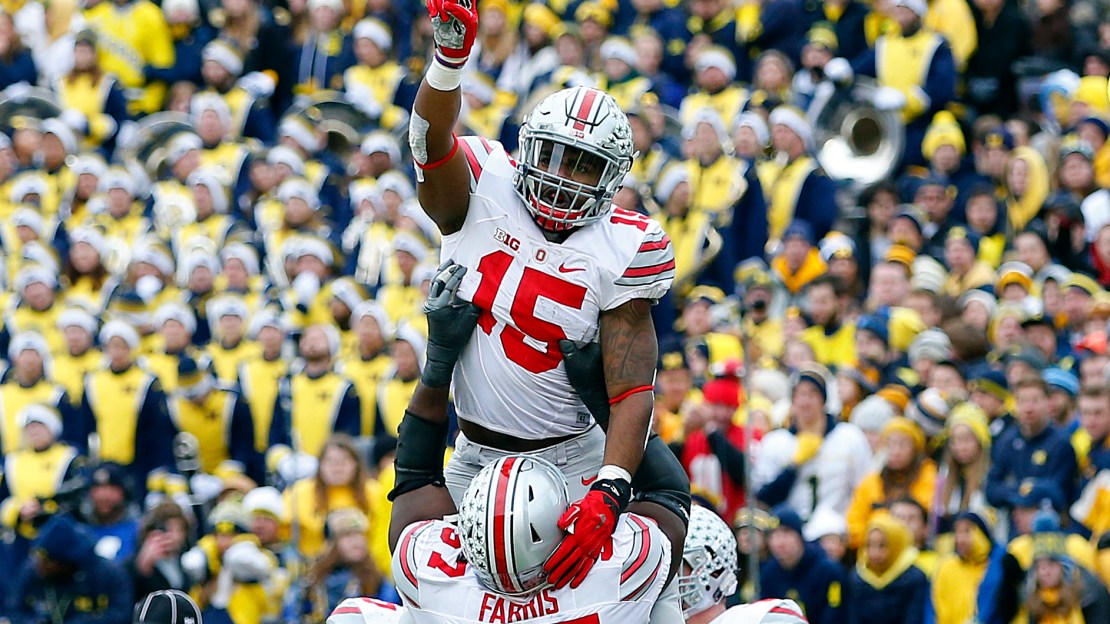 It is NFL Draft day! Hallelujah! And, it could be a big few days for Ohio State, as 13-15 Buckeyes could be tabbed over the next three days. A fascinating guy to watch: Braxton Miller. Where will he go? Doug Lesmerises of Cleveland.com has 11 final thoughts on OSU and what could be an historic 2016 draft for the Buckeyes.

Pennlive.com has a fun look at Penn State?s 1980 draft class. This group included the likes of Bruce Clark, Matt Millen and Matt Suhey. Not bad. Well, Clark was a bust. But, still ?

Also, Cleveland.com takes a look at Ezekiel Elliott and the depressed market for running backs in this draft. This piece illustrates how running backs just aren?t valued like they once were.

This is really interesting and more proof of how the NFL has become a passing league.

How impressive is this from the Lincoln Journal Star: Since the common NFL Draft began in 1967, the Huskers are one of just five teams that have had a player picked every year. The others are Michigan, Florida, Michigan State and USC. Tennessee was on that list until last year. Nebraska has had a player picked every year since 1962 and should stay on the list after this year?s draft.

We told their stories all year long, so here they are one more time. Good luck to all the NFL Draft prospects. https://t.co/8ifrDtBSyn

Andrew Logue of HawkCentral.com looks at the reported TV deal between FOX and the Big Ten. Yep, it?s a win-win.

How does the Big Ten win? Each school reportedly could eventually receive nearly $40 million annually. So, how does Fox end up a winner? First, Logue points out the network will air 25 football games and 50 men?s basketball games. Fox is known more for its coverage of the NFL, and joining forces with the Big Ten is a step toward becoming a competitor with ESPN in college sports. Second, the way people consume programing is evolving and a six-year arrangement won?t leave Fox deadlocked for a decade.

Still want some spring ball? Omaha.com has some nice capsules on each Big Ten West team from the great Lee Barfknecht. This is going to be a fun race, but Iowa has to be the favorite, right?

Mark Dantonio says he won?t pick a QB until camp. But Tyler O?Connor thinks he?d be the best option. And, he?s correct. In fact, if he isn?t the guy, it will be a major shock. O'Connor was clearly the most impressive of the quarterbacks in the spring scrimmage, completing 10 of 16 passes for 138 yards and a touchdown.

"I feel pretty good about how I've led the team and how I've managed the offense," O'Connor said after Saturday's Green-White game at Spartan Stadium. "My biggest thing is just being respected by my fellow teammates, being the leader, and being the guy," O'Connor said. "œIt's up to them whether they view me as that guy, and I think that's a telling sign of where we're at."

Now hear this: The Department of Justice is reportedly looking into satellite camps. The United States Department of Justice started an informal inquiry on satellite camps by calling college football coaches, conference commissioners and school administrators, according to a report Monday evening by USA TODAY. According to the report, the DOJ's interest revolves around whether the ban of the camps could impede opportunities for players to draw interest from college coaches.