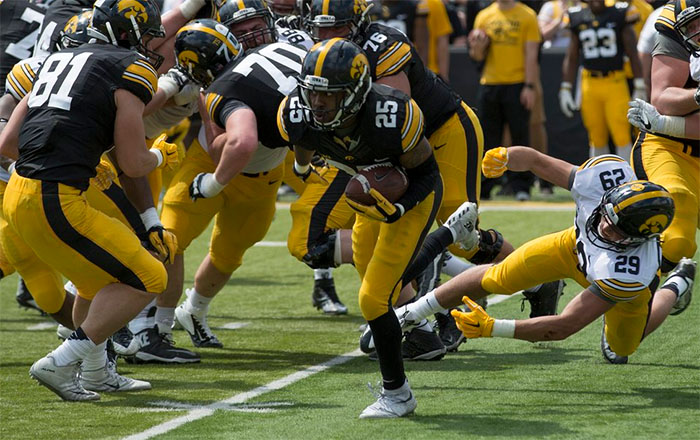 Iowa, fresh off one of the school?s greatest seasons in which it raced to a school-record 12-0 start, capped a successful spring practice Saturday afternoon. Don?t? look now, but Kirk Ferentz 18th edition of the Hawkeyes could have a shot to repeat as West champs.

[ MORE: Watch replay of the Iowa spring game on BTN2Go ]

Iowa welcomes back a strong corps of players on both sides of the ball, led by QB C.J. Beathard on offense and CB Desmond King on defense.

But there are some concerns as the Hawkeyes. The defense could be a cut-above if the front seven develops. The offense could feature another physical rushing attack, but the line needs to develop - along with some pass catchers to open running room for a fleet of good backs.

Here are five things I learned in spring drills.

1. The backup QB situation is a concern. C.J. Beathard didn?t play in the spring scrimmage after hurting a shoulder in practice. Beathard had an MRI on the shoulder. All is well, as it was only a bruise. But he was held out of the spring game as a precaution. With Beathard out, Tyler Wiegers got to run with the first team. And, he didn?t set the world on fire. He hit 14-for-28 passes for 100 yards with two interceptions. Drew Cook looks like he may be legit, hitting 8-of-13 passes for 116 yards and a TD while quarterbacking the second team.

2. Defensive end could be an issue. Gone are Nate Meier and Drew Ott. Who will be the next force off the edge? Keep an eye on Matt Nelson. The sophomore flashed some playmaking ability off the edge at a big position of need. Who else will step up around him at end? Stay tuned.

3. There are plenty of options at wideout. This long has been a position of need in Iowa City, and there seems to be a perpetual search for a go-to wideout who can stretch the field. Matt VandeBerg, Jerminic Smith and Riley McCarron form a nice starting trio, though some key drops took place by McCarron and Smith. A guy to watch is Jay Scheel, who has turned a lot of heads this spring. Who will be a steady No. 2 option after VandeBerg?

4. The offensive line is taking shape. Sean Welsh didn?t play because of a bad ankle, but he could be the center over James Daniels, who may stay at guard after missing spring drills with a knee injury. Ike Boettger and Cole Croston look set a tackle. Having Boettger back from an ankle injury that cost him most of 2015 is big. Boone Myers is inside at guard after playing tackle. This could be another strong front and more than capable of opening holes for LeShun Daniels and bulked-up Akrum Wadley, who looked good on Saturday.

5. Iowa has a stud in TE George Kittle. This is a program that has a history of producing top tight ends, including the likes of Dallas Clark, Tony Moeaki and C.J. Fiedorowicz, among others. Kittle is versatile, able to line up as a wideout if needed. He also is the team?s best blocking tight end. Kittle will be a difficult matchup for foes. Behind him? Jon Wisnieski and Peter Pekar are battling.