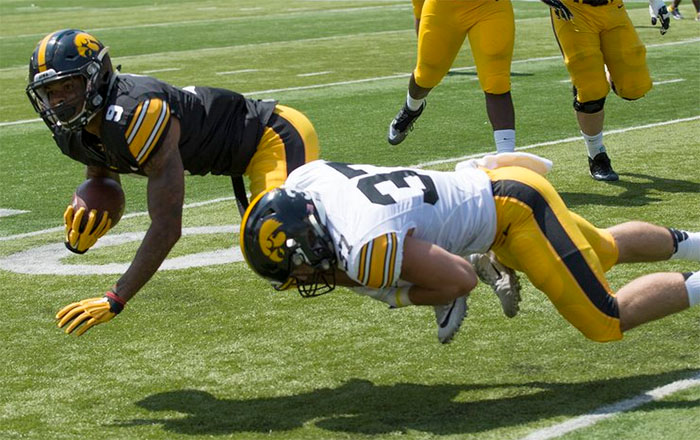 (AP) Iowa had hoped that the return of star defensive end Drew Ott would fill out its defense.

[ MORE: Watch replay of the Iowa spring game on BTN2Go ]

The Hawkeyes should be stout on that side of the ball anyway.

Iowa suffered its first major loss in 2016 when the NCAA denied Ott's appeal for an extra year of eligibility because of a medical hardship. But the Hawkeyes should still have one of the best defenses in the Big Ten next fall, with seven starters back from a unit that allowed just 19 points a game last season.

Iowa, which went 12-2 and 8-0 in conference play last season, concluded spring practice with a scrimmage Saturday at Kinnick Stadium. The Hawkeyes defense outpaced their offense for much of the workout – though the offense played without quarterback C.J. Beathard. He bruised his throwing shoulder in practice earlier this week but is expected to be back when Iowa resumes its workouts in June.

"You see some progress being made," coach Kirk Ferentz said. "I think we saw some good growth with all four guys who worked in the two deep (at end) … you see potential there. You see growth."

Ott's departure will thrust redshirt freshman Matt Nelson into a much bigger role.

The Hawkeyes are hoping Nelson can start living up to his extremely high expectations by the fall.

The 6-foot-8, 275-pound Nelson, who grew up in nearby Cedar Rapids, turned down offers from the likes of Florida State, Stanford and Notre Dame to play for the Hawkeyes. Nelson, who was also used as a tight end in high school, came to Iowa as something of a project – and unheralded end Parker Hesse moved ahead of him on the depth chart after Ott went down with knee and elbow injuries.

Iowa will count on Nelson and Hesse, along with emerging freshman tackle Anthony Nelson, to bookend veteran tackles Jaleel Johnson and Nathan Bazata next fall.

The Hawkeyes will also return one of the nation's top players in cornerback Desmond King – the 2015 winner of the Thorpe Award as the country's top defensive back.

King will team up with fellow senior Greg Mabin, who missed the spring with injuries. Mabin's absence paved the way for freshman Michael Ojemudia to show what he could do this spring, and he apparently made quite the impression on his teammates and the coaching staff.

Ojemudia's emergence is likely one of the reasons defensive back Maurice Fleming abruptly decided to transfer earlier this week.

"He's come a long way. He has figured out the defense this spring. He's looked a lot more comfortable over the last six or seven practices. He has started to blossom," safety Miles Taylor said of Ojemudia.

The biggest surprise of the spring scrimmage was the move of freshman quarterback Ryan Boyle to wide receiver, where he debuted on Saturday.

Ferentz said the staff had only put Boyle at receiver a few days ago in an effort to find him playing time, with Tyler Wiegers locked in as Beathard's backup.

Boyle's move also might be temporary, since the Hawkeyes have long liked his potential behind center. But Boyle looked like a natural at the position in the final spring scrimmage – even catching a touchdown in the back of the end zone

"He doesn't have a ceiling with his athleticism. He can do just about anything he wants," wide receiver Matt VandeBerg said.