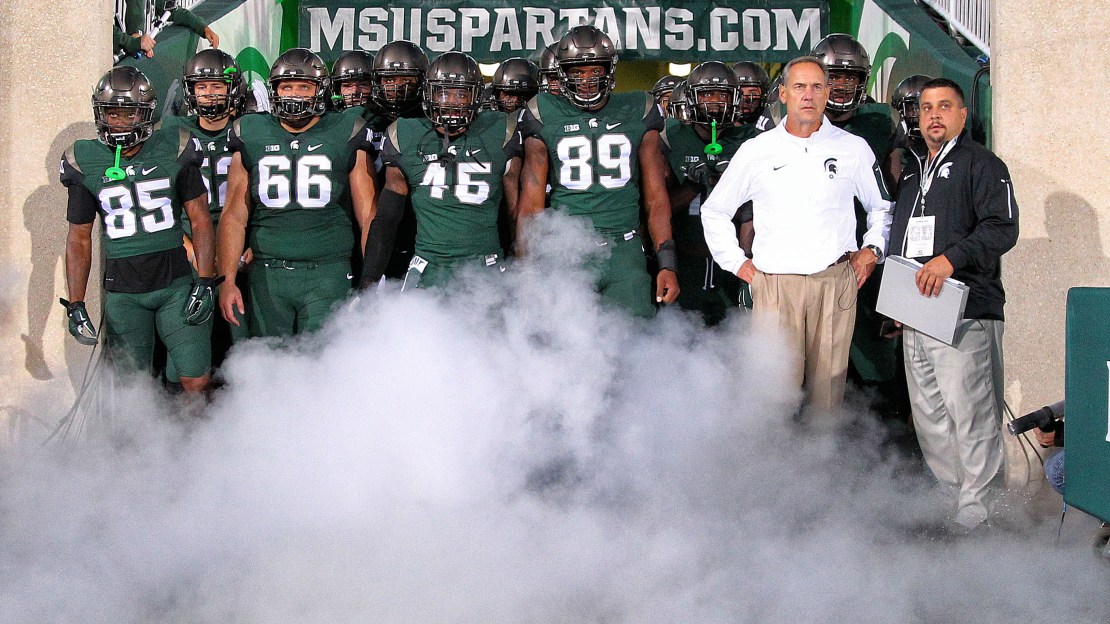 Michigan State?s spring game is Saturday. And Mlive.com has players to watch.

I'll be there and my eyes will be on WR Donnie Corley, who could be a special player. The midterm enrollee already has been dubbed ?Donnie Football.? He will be a two-way guy some time.

Get the full spring football game schedule for Saturday on BTN2Go.

Everyone knows Nebraska?s Tommy Armstrong needs to improve his footwork. And Mike Riley says the senior signal-caller gets it.

Omaha.com notes that Riley said the NU coaches will draw up a summer plan for Armstrong, addressing timing, footwork and route depth. More reps, even without pads and a helmet, will help. He has to make better decisions and limit turnovers.

Will there be a better defensive line in the Big Ten than Michigan?s? Nope.

Pennlive.com has five young players in addition to DT Kevin Givens who should impress this fall for James Franklin. I like left guard Ryan Bates, a redshirt freshman who could impact on a front that needs help.

Speaking of offensive linemen, Jamarco Jones is locked in at the key left tackle spot for Ohio State. He could be a good one.

The true junior played in every game last year either on special teams or in a backup role, but he's never made a start. He served as the Buckeyes sixth offensive lineman last year. Urban Meyer said the rest of the offensive line — outside of returning starters Billy Price and Pat Elflein — is not set, though. As the Buckeyes exit spring practice, Isaiah Prince is the right tackle and true freshman Michael Jordan is the left guard. But that can change.

"(Prince) is very close, he just has to grow up a little bit," Meyer said. "He had a very good spring, so it's very close. It's just not quite where Jamarco Jones is at."

Not having Drew Ott will hurt the Iowa d-line next year. Fellow end Nate Meier also is gone. But there is a trio of tackles that should be a good anchor up front.

Rutgers? defense had many issues last season. One of the biggest: a struggling secondary. The good news: There is only one way to go after last season?s poor effort, right?

"It's kind of like being an alcoholic: You have to figure out where you are. If you're rock bottom, then OK, now I've got a chance," DB coach Bill Busch told NJ.com. "I'm not saying that we were rock bottom, but it does give you a chance to evaluate where you are. If you just went sheer numbers, they weren't real good last year as far as defensively what had to be done. We had to be able to build from that."

Interesting take here from TestudoTimes.com: D.J. Durkin?s transition is much different than Randy Edsall?s, which was marked by many player defections-20 in all.

It?s hard to imagine how Durkin's first five months on the job could have gone better. Maryland has had one announced transfer, plus a few NFL Draft defections, and is currently recruiting at a level higher than Edsall ever touched over five seasons in College Park.

Check out the nice coaching tree for Michigan?s John Beilein.

"I'm really proud of that," Beilein said last week. "That's a pretty big number for a guy who came up the way I did. That shows great respect for the program."

Cool story from GopherHole.com on ex-Minnesota hoopster Trevor Mbakwe, who is playing in Israel.