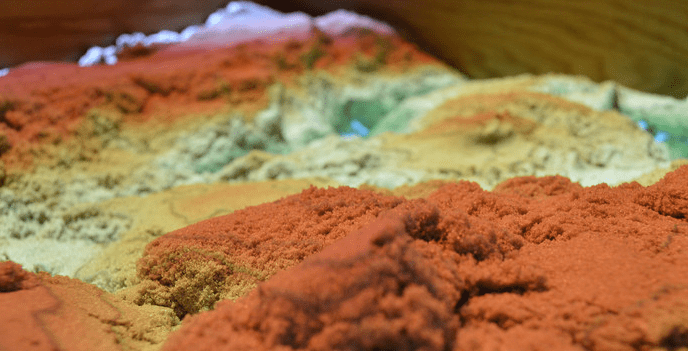 In Happy Valley, you don?t have to be a kid to play in the sandbox.

This spring, Penn State?s College of Earth and Mineral Sciences Museum and Art Gallery debuted a new augmented-reality sandbox as part of an exhibit about topographical maps.

Visitors shape the sand any way they want to inside the box. Then Xbox Kinect sensors relay information about the changes in elevation within the box to a computer that projects a topographical map onto the sand.

?You can make rivers and valleys and mountains, and it will project it,? said Julianne Snider, the museum?s assistant director for exhibits and collections. ?You get a really good idea of how topographic maps are made and what does that look like and what all those squiggly lines on a topographic map actually mean. You can see that three-dimensionally.?

In addition to the topographic contour lines and color-coded elevations, the exhibit comes with another unique feature.

?You can look at both topography and hydrology,? Snider said. ?There?s a way you can hold your hand under the projector, and it will make it rain. You can make it rain on the mountaintop and watch how the water would react and run down the sides of the mountain to where it would collect.?

The sandbox ties in closely with other materials in the museum. There is also a plaster relief map of Pennsylvania from 1893 currently on display, and Snider said combining these two exhibits demonstrates how far topography has come.

?The really interesting thing is that the topography that is shown on this 1893 map, which of course had to be all calculated by hand, is very, very close to what we know now as the typology based off of satellite mapping. So the accuracy was there [in 1893], but it was much more time-consuming.?

The museum also features interactive elements pertaining to tornadoes, seismology and much more. Everything on display at the museum and art gallery is linked to Pennsylvania or to research performed at the university. The sandbox was originally proposed by a research associate in the department of geosciences, but often the students can even create their own exhibits.

?We?ve had a half-dozen or so in the last 10 years,? Snider said. ?They do senior theses, and we encourage students to turn those theses into exhibits. And we?ll work with them on making them exhibits.?

For instance, students who enrolled in CAUSE 2014, a course in the College of Earth and Mineral Sciences, travelled to Curacao, Venezuela, almost two years ago to do field research. Now, their work is on display in the museum.

?In the class that we?re highlighting right now, undergraduates do a couple years? worth of study and then they go down to off the coast of Venezuela and do diving and look at coral reefs and take measurements and figure out what?s going on with the coral,? Snider said.

More student research is on its way to the museum too, she added. Graduate students recently constructed an exhibit on ocean acidification using 3-D printer technology.

[btn-post-package]Although the sandbox and other interactive science pieces might get a lot of attention, the art gallery is integral to the museum too. It includes paintings and sculptures from 1900 to around the middle of the 20th century, and Snider was quick to point out its importance to the museum.

?We had a very forward-thinking dean who amassed this art collection, which teaches students who are going to be mining engineers something about culture and life outside of just doing engineering,? she said. ?But they also were used to show the public that this is what we do. This is the kind of job we are training our students for, and this is an economic engine driving prosperity in Pennsylvania.?