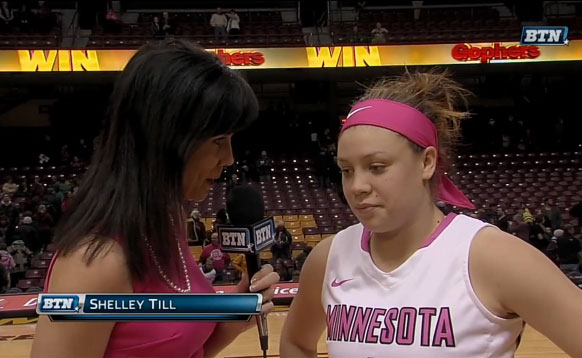 A total of six Big Ten players heard their name called, highlighted by three selections in the first round.

Former Minnesota star Rachel Banham was the first Big Ten player to come off the board, going No. 4 overall to the Connecticut Sun.

Aerial Powers of Michigan State went fifth overall to the Dallas Wings, while former Rutgers standout Kahleah Copper was selected No. 7 overall to the Washington Mystics.

Here is a look at every Big Ten player selected and where they were drafted.

.@Aerial_Powers drafted fifth overall by the @DWingsHoops. She is the 6th Spartan drafted in the @WNBA highest ever pic.twitter.com/mvGhFqxTTR

DRAFTED: With the 7th pick in the first round of the WNBA Draft, the Washington Mystics have selected @KahleahCopper pic.twitter.com/kQV6y4VrOS

DRAFTED: In the second round with the 13th overall pick in WNBA Draft, the Atlanta Dream have selected @Humble_RH1 pic.twitter.com/HPzXEYNEdf

Congrats to Brene Moseley, who was drafted 21st overall by the Indiana Fever! #WDraft16 #ProsPlayHere pic.twitter.com/14v93fiix3

Headed to NY with the 24th overall pick. Congrats Am! #GoBucks pic.twitter.com/kLuppwxPX1