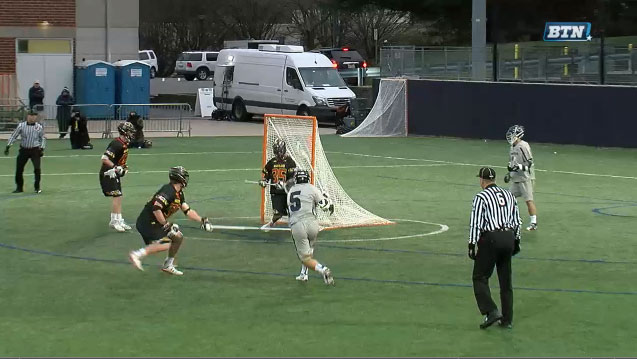 Another week of conference play is in the books and another round of close, dramatic games continue to be the theme for Big Ten lacrosse. The maturation of the conference has been outstanding. This past weekend two games were decided by a goal, with one going to overtime. Let?s take a look at the action from this past week (all available highlights are in the YouTube playlist above).

Now let's look at No. 4 Maryland (8-2, 2-0 Big Ten). The Terrapins traveled to State College for a primetime battle with Penn State on Sunday night. This game was highly anticipated due to winning streaks for both teams and the fact that the Terrapins had never lost to the Nittany Lions in lacrosse and own a 30-0 record in the series. Many felt this was the time for the first win for Penn State.

Down 8-4 the Terps called timeout, regrouped, and left the huddle as a different team. Maryland would outscore the Nittany Lions 7-2 over the game?s final 42:56 to claim an 11-10 win in overtime. This game had it all — great offensive flow, tough defense, and amazing goaltending. Maryland netminder Kyle Bernlohr was sensational, stopping a career high 14 shots, including a tough stop in overtime, to keep the Terps in the contest. Bryan Cole (2 goals, 1 assist) netted his second straight game winner when he sank a lefty high to low laser with just 0:43 seconds left in OT.

First place is on the line this Saturday when Maryland plays host to Rutgers in College Park at 4 p.m. ET.

Before we get to the rest of the teams, here's a look at the standings through April 13.

The Nittany Lions are vastly improved from 2015. They are fun to watch and play with heart and passion. It was tough to watch them come up short against Maryland but they played a great game. Up 8-4 it looked like they were going to grab the win.

Will Schreiner continued his stellar play in goal with an eight save effort. Like Bernlohr he too made a save in overtime that allowed Penn State to get a shot at winning. Mike Sutton (3 goals) was a bull all night and almost powered the game winner past Bernlohr. Grant Ament (2 goals, 1 assist) has shown he is a budding star in leading this Penn State offense though just a freshman. Penn State will once again be in primetime this Sunday when they welcome Johns Hopkins to State College in a game that can be seen on BTN at 7 p.m. ET as well as BTN2Go.

Fresh off a signature win over Hopkins there was no letdown for the Scarlet Knights as they ran away from Michigan 13-6. Showing focus and not getting caught in what could have been considered a trap game shows this team can handle success. The win is the fourth in a row for Rutgers.

This one was close at half with Rutgers leading 5-3. After an even third period the Scarlet Knights closed the game on a 5-0 run. The attack unit has not let up for Rutgers. This week Jules Heningburg (5 goals) led the way. Scott Bieda (2 goals, 4 assist) was his usual solid self as well, while LSM Zack Sikora had another solid game. Sikora is emerging as one of the better LSMs in all of college lacrosse.

First place is at stake this Saturday when Rutgers invades College Park to challenge Maryland in a game available live on BTN Plus.

In a replay of last year?s Big Ten title tilt the Blue Jays welcomed back head coach Dave Pietramala after a four-game absence due to a back infection. They treated him to a hard fought 13-12 win. The Jays seemed to be energized by the return of their leader. It?s always cool to see athletes respond in such a positive way, recognizing how much a person cares about them to battle an illness to return.

On the field Ryan Brown (3 goals, 1 assist) still has the hot hand, while midfielder Holden Cattoni (2 goals, 1 assist) had a big game with Drew Supinski out of the lineup due to injury. Freshman Kyle Marr (2 goals) also had a big day as he continues to develop as a player. In really what Hopkins considered a must win game the Blue Jays dug deep and held on defense after seeing a four goal lead evaporate in the 2nd half.

Hopkins heads to Penn State in a huge Sunday night showdown that can be seen on BTN at 7 p.m ET and on BTN2Go, too.

The Buckeyes dropped their sixth straight game in a tough fashion, falling to Johns Hopkins by a final of 13-12. Ohio State has been so close, losing four of the six by one goal. Down 8-5 at half they battled back and had a chance to win on their last possession but couldn?t convert before time expired.

Ohio State looks to get back on track this Saturday against Michigan. The Showdown in the Shoe can be seen live on BTN at 11 a.m. on April 16 and via BTN2Go here.

The good news was Ian King returned from a two game absence. The bad- Michigan wasn?t able to parlay his presence into a win on the road against Rutgers. The Wolverines played the Scarlet Knights tight, trailing 7-5 heading into the 4th quarter. From there it was all Rutgers as Michigan failed to get any closer before falling 13-6.

King (2 goals, 1 assist) was solid in his return but didn?t get much help from other sources. Credit the Rutgers defense with a solid effort. Faceoff ace Brad Lott was terrific, winning 16-23 on the afternoon. Despite this advantage Michigan couldn?t convert scoring chances consistently.

Be sure to catch the Showdown in the Shoe, Michigan v. Ohio State, this Saturday at 11 a.m. ET on BTN and via BTN2Go here.