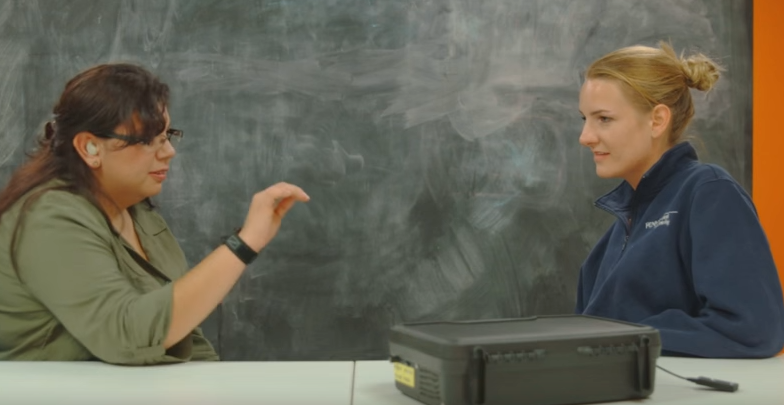 Giving a voice to the voiceless: For Mary Elizabeth McCulloch, that formidable mission began in 2010 while she was an exchange student in Cuenca, Ecuador.

McCulloch?s Spanish was admittedly poor, and she thought that volunteering with children might help her practice the language. That?s how the high schooler found herself working at the Mensajeros de la Paz (Messengers of Peace) Orphanage.

What she found within its walls would change her life.

?They had about 40 kids,? said McCulloch, now an undergraduate student majoring in bioengineering at Penn State, ?15 of whom had complex communication needs, and a lot of them had terrible palsy.?

In simplest terms, cerebral palsy is the name for a group of movement disorders. Due to abnormal development or damage to the centers of the brain that control movement and balance, individuals with cerebral palsy have weak or stiff muscles, lagging coordination and tremors. Other symptoms include visual and auditory problems, and difficulty swallowing and speaking.

It was that last impediment that hit McCulloch the hardest. The children she helped every day were coherent thinkers and wanted to communicate, but they couldn?t speak without great difficulty and immense patience on the part of both the child and a caregiver.

?It?s hard for us to think of a life where we are not able to say what we?re thinking or how we?re feeling,? McCulloch said. ?Furthermore, people who are unable to communicate have a hard time integrating into the community and being a part of a group, a family, and being able to communicate their thoughts and wants and feelings toward other people.?

Communication problems are compounded for those from impoverished areas, because most speech-assistive technologies currently on the market cost upwards of $60,000.

With this in mind, McCulloch realized that if she could devise a simple solution to the challenges that most of these children faced, it would go a long way to improve both their lives and those of the people who interact with them every day. Thus, Project Vive was born.

McCulloch set out to create a mechanism, now called the Vive Device, which uses small movements from one joint of the body in order to construct full sentences.

?All of [the non-communicative children] had at least one joint they had control over,? she explained. ?The first model was just simple sticks that were placed in a knee brace. One of the kids that I worked with, Dario, had great control of his knee. I realized that if we could use those responses to click through menus so you can track his senses, his life would be greatly improved.?

Using the latest in Bluetooth technology, McCulloch made the device wireless, and therefore easier to use in conjunction with a wheelchair. From there, McCulloch developed wearable tech that?s vastly more accessible compared to most other devices.

To fully realize her vision, McCulloch enlisted the help of a team of software, electrical and mechanical engineers, a speech pathologist, educators and even her own father.

And right when she needed it, Penn State was there to help as well.

[btn-post-package]?The small business development center helped me get a market analysis,? McCulloch said. ?My Lion Launch Pad [PSU?s student entrepreneurial accelerator] helped connect me with other entrepreneurs in the community as did the summer funders program. I?ve also had a lot of Penn State alumni reach out to me, including our IP staff and the lawyers who are helping us out.

?The goal of Project Vive is to provide low-cost, robust speech-assistive devices,? she added. ?But we are more than just a device; we are an initiative to provide devices and train caregivers and users through local support to ensure that once we give a device and a voice, it is never taken away.?

Watch the one-minute video above to see how Project Vive is getting the words out.