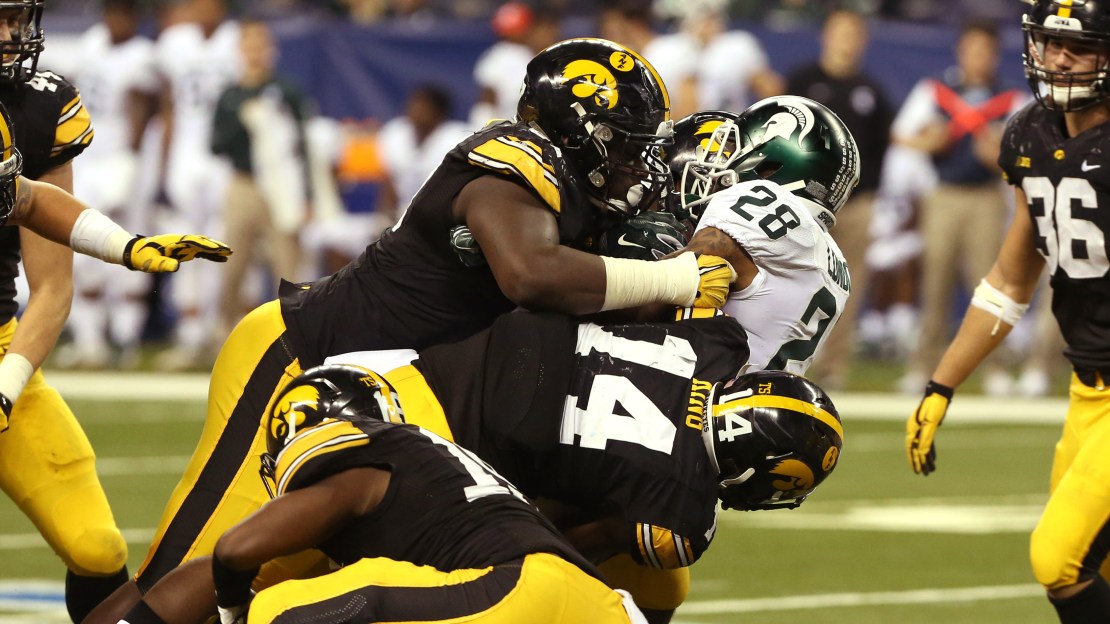 Iowa CB Desmond King won the Jim Thorpe Award last year and could have entered the NFL. But, the Hawkeyes' star opted to return for his senior season.

In his first interview with Iowa media since the Jan. 1 Rose Bowl, King said ?it was the bond I have with my teammates here? that ultimately brought him back. Some NFL Draft projections had him going as a late first-round choice. King didn't expand on the evaluation he received in late December, but said it was favorable. Great to see this guy back in Iowa City.

Speaking of Iowa, here are some nice photos from a recent Hawkeyes? open practice. Could this team win the West again? I think so. Iowa at least is the favorite, right?

Count Nebraska coach Mike Riley among those who is disappointed that satellite camps have been banned. A school with a small recruiting base like the Huskers? could benefit from the events. NU had six camps planned.

As a result of the decision, Riley said he and his staff would work on trying to draw more top prospects to the team?s camps in June. Riley has also told Omaha.com that he advocated for earlier official visits in the spring and summer, but believes those won?t come until the NCAA membership body agrees to an early signing date, as well.

?We?re getting closer to it,? Riley said of early official visits. ?I don?t know what that means - next year or the year after. It?s not going to be upcoming. We won?t have an early signing day or early visits now, obviously for this spring. It?ll come up as a topic for next year. But they have to be tied together.?

Here is a look at some Twitter reactions to the satellite camp ban.

Tyler O?Connor is the favorite to win the Michigan State QB job. But keep an eye on redshirt freshman Brian Lewerke.

"Quick release, knows where to go with the ball for young player, very steady, very cool, he has great arm strength, good arm strength," Coach Mark Dantonio told Mlive.com, "and he reminds me a little bit of Kirk Cousins, in a lot of ways."

Did he just say ?Kirk Cousins??

Lewerke is the first quarterback Dantonio has felt worthy of that comparison to Cousins, the starting quarterback with Washington's NFL franchise after getting selected in the fourth round of the 2012 draft.

A nice podcast from the Keystone Sports Network looks at the Penn State defense, which has personality. But keep an eye on the Nittany Lions' line. It has holes to fill.

James Franklin said his defense showed "personality" at a recent practice, putting heat on quarterbacks Trace McSorley and Tommy Stevens with better disguised looks from Brent Pry. Those new QBs need to get up to speed quickly.

Urban Meyer has compared the 2016 Buckeyes to the 2014 edition that won a national title. But Meyer hasn?t seen players emerge this spring like he did in the spring of 2014, when guys like Ezekiel Elliott, Eli Apple, Michael Thomas and Darron Lee stepped up. Don?t panic just year, Buckeye fans.

It was a big blow for Illinois to lose WR Mikey Dudek for a second season in a row to a knee injury. The guy looked like a future star after a great debut in 2014 that saw him grab 76 passes for 1,038 yards. Loren Tate of the Champaign News-Gazette has five other players the Illini can?t afford to lose.

Wisconsin A.D. Barry Alvarez has some good things to say about Rutgers coach Chris Ash, who was DC in Madison at one time. And Alvarez knows what Ash is up against, trying to rebuild a state institution like he did at Wisconsin from 1990-2005.

"He's probably a little further along than we were when I got there," said Alvarez at the RU Football Coaches Clinic." We really had to start from scratch. When you are an assistant coach like I was and you go to a Division I school in a big conference like Chris did, you have to take bad jobs and make them good. He's been trained very well. He's been under some very good coaches. He knows the plan and how to get it done."