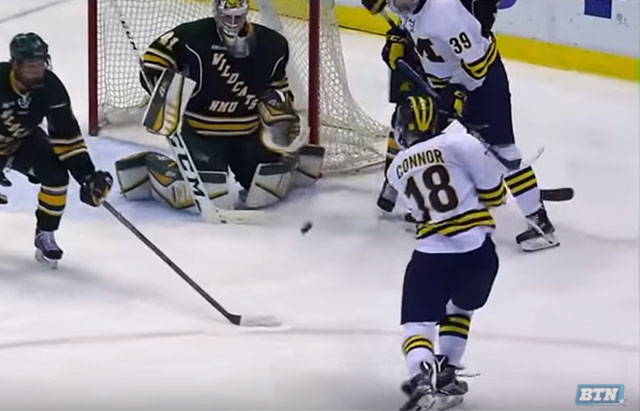 Michigan's Kyle Connor fell just short of winning the Hobey Baker Award, which is given to the top NCAA men's hockey player.

Hardvard forward Jimmy Vesey won the award, which was announced during the NCAA Frozen Four championship in a live ceremony held at historic Tampa Theatre in Tampa, Florida and aired nationally on NHL Network.

Despite not winning the Hobey Baker, Connor did receive an award on Friday. He was he recipient of the 2016 Tim Taylor Award, bestowed annually upon the best first-year player in NCAA Division I men's ice hockey.

Connor still enjoyed a record-setting season for the Wolverines. He led the country with 35 goals and 71 points in his first year of Division I hockey. He had 19 multi-point performances and seven game-winning goals.

Among his many highlights this season, Connor became the first Wolverine to post four goals in one game since Kevin Porter on March 28, 2008. See videos of all four goals below.

Last year, Connor was selected 17th overall by the Winnipeg Jets in the 2015 NHL Draft.

An incredible freshman, an incredible year. Thank you Kyle for a great season. #GoBlue pic.twitter.com/PDcM1de1LF

Here are goals from his fiour-goal game against Penn State.