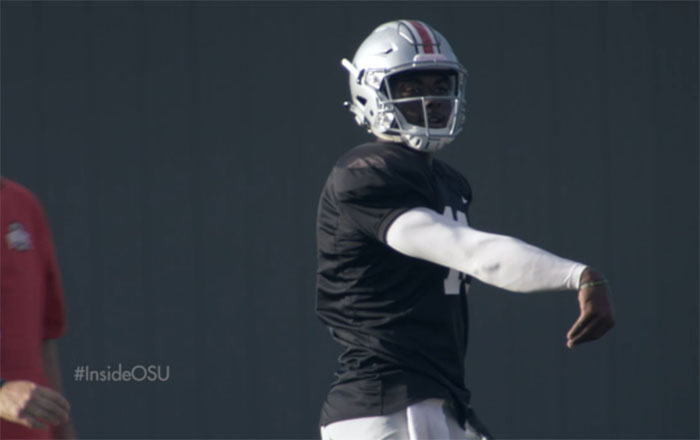 What is J.T. Barrett?s NFL future? He already is being compared to Russell Wilson. Hmmmm. Maybe Robert Griffith is a more apt comparison from a size/skill standpoint.

"His temperament, his acumen, his ability to assess, his intangibles are off the charts," QB guru George Whitfield told Cleveland.com. "I think he's a little bit bigger than Russell Wilson, but I think he'll have a lot of that Russell Wilson feel about him."

Looking for a future stud? Look for further than Michigan State LB Andrew Dowell, who got unexpected playing time last year and looks to be a good one.

Mlive.com notes that Dowell started his first spring football session in East Lansing listed as the starting star linebacker, making him a leading candidate to take over the position vacated by Darien Harris. It's been a fast rise for Dowell, from a freshman new enrollee last July who didn't expect to play in 2015 to an experienced player and projected starter just nine months later.

Nice podcast from the Keystone Sports Network, which looks at cases for and against redshirting incoming stud offensive lineman Michal Ment.

Brian Gaia looks like the new center. Andrew Nelson and Noah Beh are the first-team tackles for now. Connor McGovern is getting work at tackle. James Franklin is mixing and matching in search of a workable combination. Ment may be too good-and the need for blockers too great-to not play him this fall.

Looks like Chris Laviano has an early lead in the quarterback competition at Rutgers. No shock there. His athletic skill set is a nice fit for what the Scarlet Knights want to do in their power-spread.

"Chris probably played the best of all three quarterbacks in that scrimmage last Saturday," Chris Ash said. "As we head into this scrimmage Saturday, all three (quarterbacks) are going to get reps with the 1s and the 2s. Chris has probably earned up through seven practices the right to get a few more reps than the other guys and that will be reflected in the scrimmage."

If Michigan has a big concern on defense, it?s at linebacker. But the unit may be OK with Mike McCray and Ben Gedeon coming on.

Overall, linebacker was the weakest part of Michigan's defense last season. Seniors Joe Bolden, Desmond Morgan and James Ross typically held up fine when a team wanted to run downhill between the tackles. But pass coverage and overall speed on the perimeter were problems for Michigan nearly all season. But speed and athletic ability are being amped up at linebacker.

The search for good receivers seems to be an annual affair at Wisconsin.

Robert Wheelwright and Jazz Peavy have worked with the No. 1 unit and are far ahead of the pack in spring drills. But who are the backups? Reggie Love? George Rushing? Freshmen will get a chance, too. Add in a new quarterback, and you can see why there are concerns with the passing game in Madison.

Hey, it was nice to see Iowa?s Nicholas Baer earn a scholarship. The guy earned it last year as a redshirt freshman. I love this guy, a classic Iowa player.

?When we invited Nicholas to walk-on two years ago, I had a strong suspicion that this day would come,? Fran McCaffery said. ?I didn?t give him a scholarship; he earned one. And that?s the greatest compliment that you can give to him.?

HawkCentral.com notes that Baer might?ve gotten this news sooner, considering he broke into Iowa?s rotation early in the nonconference season. But McCaffery didn?t have any scholarships available until freshmen Brandon Hutton and Andrew Fleming announced their intention to transfer last week.

Here is a good conversation with new Illinois DC Hardy Nickerson, courtesy of the Champaign News-Gazette.

Nickerson brings a great NFL resume to Champaign that should play well with recruits. But he has his work cut out for him trying to rebuild a depleted Illini LB corps.

How serious do they take their weight training records at Nebraska? Check this out.