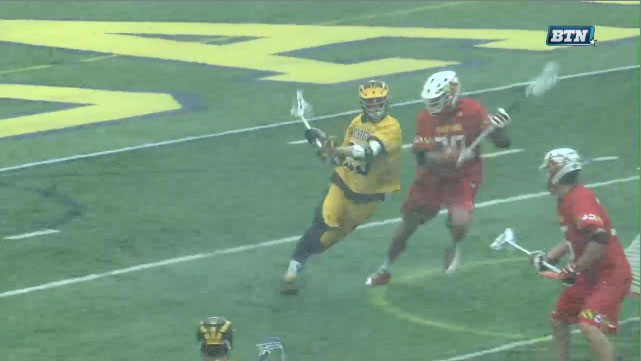 The 2016 college lacrosse season is well underway and we've already seen an unprecedented number of upsets. 2016 is proving to be unique, entertaining, and unpredictable. Conference play kicked off last week with a pair of one goal games and a surprising upset. The Big Ten looks like it will be an exciting conference week in and week out.

The Terps had a rough early patch, dropping games to Yale and Notre Dame in consecutive weeks. Keep in mind the Bulldogs and the Fighting Irish are currently the top two teams in the country. After those setbacks Colin Heacock (20 goals, three assists) moved from midfield to attack, and the offense has been humming since. Alongside Matt Rambo (19, 7) Heacock gives Maryland a dangerous righty/lefty combo down low that is hard to defend. The Terrapins are currently on a six-game winning streak, defeating Albany, North Carolina, and Penn.

Maryland possesses perhaps the deepest midfield core in all of college lacrosse. The Terps go six deep and can beat you in a variety of ways. The headliners are Bryan Cole (11,13) and Connor Kelly (9,9). Austin Henningsen (63 percent) is a solid faceoff man and All-Americans Matt Dunn and Kyle Bernlohr make the defense as strong as ever.

Maryland opened up Big Ten play this past Saturday with a thrilling 8-7 win at Michigan. Cole scored the game-winner with just 43 seconds left in the game to avoid the upset. Bernlohr was great in goal with 12 saves, one a circus one-hander that kept the game tied late.

Here are the standings through last weekend:

No team endured a tougher off-season than the Nittany Lions. Starting goalkeeper Connor Darcey was killed in tragic auto accident last June. The team carries on and honors his spirit in everything they do on and off of the lacrosse field.

On the field the results have been uneven but this team can play. Penn State scored their biggest win this two weekends ago when they knocked off reigning national champion Denver 15-10. In a season full of upsets that may have been the biggest thus far. The Nittany Lions also have a strong win over Harvard. All of this has been without the services of faceoff man Drake Kreinz, who just made his season debut last week. Holding down the fort in his absence has been Billy Lombardi (48 percent), who shined against Denver FO man Trevor Baptiste to help the Nittany Lions score the upset.

Penn State met Ohio State in their Big Ten opener and ground out a tough 6-5 win. Goalie Will Schreiner was superb between the pipes making a career high 15 saves. Six different players scored for the Nittany Lions, the last being Matt Florence who broke the 5-5 tie with a blast with only 1:41 to go in the game.

The Blue Jays suffered two blows before the season when they lost midfielders Joel Tinney (NCAA violation) and Connor Reed (injury) for the year. Midfielder Alex Concannon was lost to injury shortly thereafter as well. If that weren?t enough, head coach Dave Pietramala has been sidelined with a back infection. Pietramala has missed the last four games and the timetable for his return is uncertain.

Despite the losses Johns Hopkins has secured a marquee wins over Towson and Syracuse. The Blue Jays have had other players such as Cody Radziewicz (9,3), John Crawley (12,6) and Drew Supinski (8,4) step up in the midfield to get production. The strength of the offense is the attack, led by Shack Stanwick (14,28) and 2015 Big Ten Offensive Player of the Year Ryan Brown (25,9). Hopkins generates their scoring chances through ball movement, picks, and a lot of cutting and motion.

The defending conference champions faced Rutgers to open their conference slate and were drubbed by a count of 16-9. Supinski left the game with an injury and his status is unknown. Brown was one of the few bright spots in the loss with four goals for Hopkins.

The Scarlet Knights got out the gates flying with a 5-0 start. Big wins over Army and Fairfield were the early highlights. After dropping two straight against Stony Brook and Princeton, Rutgers is back on a three game win streak.

Piscataway is home to perhaps the best freshman in college lacrosse. Adam Charalambides (29,12) has earned Big Ten Freshman of the Week honors seven times. Alongside veterans Scott Bieda (20,23) and Jules Henninburg (22,14) Charalambides gives Rutgers a very solid trio on attack. The Scarlet Knights took a huge hit when FO man Joe Nardella graduated but Alex Schoen (58 percent) and has filled in very well. Rutgers has used three goalies at various points in the season but the job appears to belong to Kris Alleyne (56 percent) right now.

The Scarlet Knights turned a lot of heads by beating Hopkins at home 16-9. The victory is the first by Rutgers over the Blue Jays since 1990 and represents their highest ranked win since 2003. Charalambides, Bieda, and Henninburg were lights out, combining for nine goals and eight assists. The Big Ten slate couldn?t have started off any better for Rutgers.

The Buckeyes blasted off hot at 5-1 but have suffered five straight losses. Ohio State played both Towson and Notre Dame very tough but lost to each by a goal. A year removed from a Big Ten conference tournament final and NCAA quarterfinal appearance, the Buckeyes are searching to find the right personnel to supplant a lot of graduated talent.

This Ohio State bunch is built on defense. Robby Haus leads a unit that only surrenders nine goals per game. Erik Evans is solid as well, while goaltender Tom Carey has picked up his play of late, making 12 saves against the Irish. After losing Jesse King and Turner Evans from a year ago, the offense is a work in progress but has some very good players. Carter Brown (13,5) is the veteran leader at attack.

The Buckeyes dropped a tough on to Penn State 6-5 top open Big Ten play. Carey was solid in net with 13 saves and Colin Chell led the offense (1,2). Now on a five game slide the Buckeyes have lost three of those games by one goal.

After a tough loss to North Carolina, a win over Colgate got the season off on a positive note. Since then Michigan has struggled with consistency, losing tough out of conference games to Dartmouth and Marist recently.

The Wolverines have a bounty of athletes on the offensive side. Kyle Jackson (23,6) and Ian King (9,13) work well together on the attack and are fun to watch. Peter Kraus (15,3) has also been a bright spot but misses the presence Jackson and King. Goalie Gerald Logan (52 percent) has been solid but needs more help from his defense, a group that is surrendering just over 12 goals per game.

Michigan came very close to pulling the colossal upset in the snow over Maryland before falling 8-7 in their conference opener. Kraus (3g) was strong with key goals while LSM Chase Brown caused five Maryland turnovers. Despite being without 46 peecent of their offense in the form of Jackson and King, Michigan has found other guys to step up and compete.