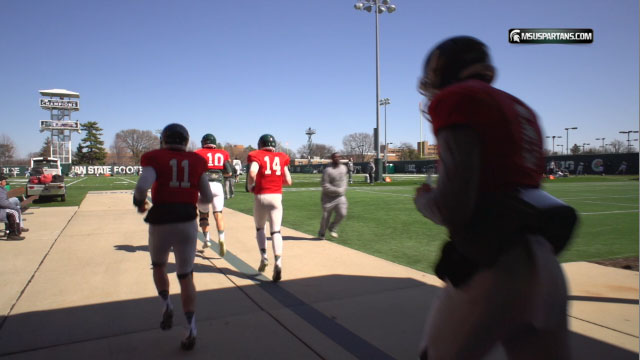 Tyler O?Connor is looking good in spring drills for Michigan State. He?s more of a playmaker, bringing a bit of a different dimension to the Spartan attack than it had under Connor Cook.

"You start having scrimmages, people tend to separate themselves as we go, or they stay the same, it's a slow process," Mark Dantonio told Mike Griffith of Mlive.com.

"I think Tyler has got a lot of ability and obviously what he was able to do the second half of the Maryland game and then the all of the Ohio State game speaks volumes, so he was very successful," MSU's 10th-year head coach said. "He's got to have a great spring and a great fall camp."

Looks like Michigan may have a future star at left offensive tackle in sophomore Grant Newsome. He?s an intelligent kid who continues to mature quickly.

"I think I was able to pick up the mental aspect easier than some people would," Newsome says. "I was able to sit down with Graham (Glasgow) and Pat (Kugler) last summer and dive into the playbook before camp even started. That was a huge help.

"That kind of gave me a leg up, gave me a basic understanding. The first few months were still a little crazy, but that was definitely an advantage."

The o-line is going to be a good one.

Get our latest spring football stories via the links below:

New Illinois coach Lovie Smith brings an extensive NFL background to Champaign. So, it?s no shock that ?mum? is the word when it comes to discussing injuries.

I never fully understand why keeping injuries under wraps is so vital-especially at this time of year. C?mon.

Who doesn?t love a diamond in the rough recruit? Each school has some. Which ones at Penn State could be contributors this season? QB Trace McSorley is an obvious choice, as the former three-star recruit looks primed to start this fall after playing well in the TaxSlayer Bowl last season. His only other Big Ten offer? Purdue.

Rutgers? Julian Pinnix-Odrick is back where he began his career: Defensive end. He had to move inside last season when Darius Hamilton was hurt. With Hamilton healthy, Pinnix-Odrick has been moved back outside by new coach Chris Ash. Pinnix-Odrick wasn't thrilled about another switch initially.

Looks like Nebraska will end spring drills without its No. 1 corner in Chris Jones, who has an infection in a thigh.

Speaking of DBs, it looks like some of the freshmen may see action this fall. The newcomers will be Lamar Jackson, Marquel Dismuke, DiCaprio Bootle, Tony Butler and JoJo Domann. Out of the five, DC Mark Banker said he expects that two or three would be ?prepped at least in some specific positions, and some specific situational type of things? for next season.

?You just never know,? Banker said. ?We think that their intellect will be there. We know the physical portion of it - from a standpoint of agility, athleticism, speed and those things - will be there.?

Ohio State has some good options at wideout for 2015, and Cleveland.com ranks them on potential. No. 1? Noah Brown. No. 2 is a surprise, as it is freshman Austin Mack. Curtis Samuel is No. 3, but he could be a running back. He is out with a foot injury. Stay tuned on his position.

Keep an eye on Iowa TE George Kittle. He could be in store for a big season.

At a program that is known for tight ends - from Jonathan Hayes to Marv Cook to Dallas Clark to Tony Moeaki and many in between - Kittle?s position coach LeVar Woods says this: ?He can be as good as anybody that's played here.?

Schools are pursuing Michigan hoops assistants, which could lead to a re-shaped staff for John Beilein.

Together and intact since 2010, LaVall Jordan, Bacari Alexander and Jeff Meyer have long been rumored for head-coaching positions, specifically since Michigan's Final Four run in 2013. Mlive.com notes that Alexander, a Detroit native and former player and assistant coach at University of Detroit Mercy, is a candidate for the Titans' current opening. Jordan, who enjoyed a standout playing career and success as an assistant at Butler, sure looks like he could be a good fit for the current opening at Valparaiso.