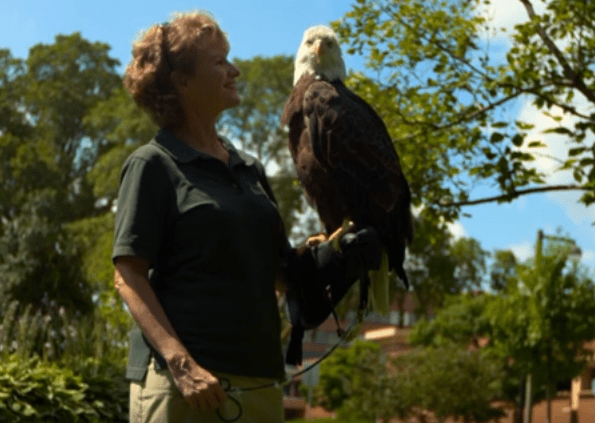 The bald eagle slowly and deliberately spread its wings as it leapt into the sky. Mustering all of its strength, the majestic bird began the slow rise that marked its return to nature - a return that only a few months prior was no guarantee.

But thanks to the work of the University of Minnesota Raptor Center, this bird - a symbol of the freedom America holds dear - once again ?slipped the surly bonds of earth? to patrol the northern skies.

?Releasing a bird back to the wild is an amazing experience,? said Julia Ponder, D.V.M., executive director of the Raptor Center. ?It never gets tiring.?

Since 1974, The Raptor Center has been tending to injured and ill birds of prey. While many birds feed on other animals, birds of prey are defined by ornithologists as those that possess keen eyesight, strong feet with long talons, and a sharp, curved beak. This group includes eagles, hawks, falcons, owls and harriers, among other varieties.

According to Ponder, the center treats more than 800 individual raptors each year.

?When the bird arrives, they get a complete physical exam and diagnostics to understand what?s wrong,? she said. ?Our veterinary staff treats their injuries, gets them back to health, and then our rehabilitation staff reconditions them and gets them ready to be released back to the wild.?

[btn-post-package]Birds come to The Raptor Center from all over the region. While some suffer from illnesses such as avian influenza or West Nile virus, the majority of these ?patients? get their injuries via some form of contact with humans. Their wings are shattered by automobile strikes and their skulls fractured after impacts with buildings. Others suffer from lead poisoning after ingesting spent ammunition found in carrion.

?We have made considerable progress over the last several years in having open and positive conversations with deer hunters and others about the hazards of lead ammunition,? said Dr. Patrick Redig, co-founder of TRC, in a 2015 newsletter.

Ponder explained that beyond simply helping these apex predators - which are vital to the ecosystem - recover and return to the wild, the center also collects important data on the impact of humans on the natural world.

The population of raptors in the region, and the role that agents such as common pesticides play in the overall health of that population, are focal points of the center?s research.

?The goal of The Raptor Center is to help change the world,? Ponder said, ?to create a more sustainable world for the raptors that live here as well as for the humans. We?re all in it together.?