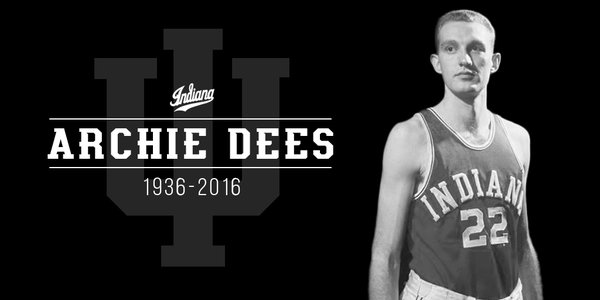 After starring on the basketball court at Indiana, he made Bloomington his home and continued to advise players almost half a century after he graduated.

On Monday morning, the Hoosiers lost one of their biggest former stars when Dees, the first two-time Big Ten Conference MVP, died at the age of 80. His daughter, Lori Dees Johnson, announced the death on her Facebook account. School officials confirmed it and issued a statement from coach Tom Crean.

"Archie Dees will be remembered for many great things and being a part of Indiana basketball royalty will be one of them," Crean said. "When Archie was around, we always knew we were around one of the all-time best."

The native of Ethel, Mississippi, became a prep star in Mount Carmel, Illinois, where he scored more than 2,300 points in his career. He took that up a notch at Indiana.

Dees averaged 25.4 points and 14.4 rebounds in 1957 when he led the Hoosiers to a conference title and won his first MVP award. The next year, he did it again, averaging 25.5 points and 14.4 rebounds – numbers that still rank among the top five single-season totals in Hoosiers' history – en route to a second straight conference crown and MVP honor.

At a time the college landscape was littered with big-time stars, ranging from Wilt Chamberlain and Elgin Baylor to Oscar Robertson and Jerry West, Dees was named a third-team All-American as a junior and to the second team as a senior. When he finished his career with the Hoosiers, Dees was ranked fourth in career rebounding (914), 10th in career field goal attempts (1,252) and ninth in career free-throw percentage (82.8).

He was selected by the Cincinnati Royals with the No. 2 overall pick in the 1958 NBA draft and played four seasons in the league with the Royals, Detroit Pistons, Chicago Packers and St. Louis Hawks as well as spending one seasons with the Cleveland Pipers of the American Basketball League.

And though his professional success did not mirror what he did in college, Dees' legacy at Indiana continues to live on. He was inducted into the school's Hall of Fame in 1983 and was named to the Hoosiers' all-century team in 2001.

"Sad to hear about the passing of Archie Dees. He taught a lot of us what it meant to be a Indiana Basketball Player. Great Hoosier," Michael Lewis, who lost his title as the Hoosiers' career assists leader this season, posted on Twitter. Lewis is now an assistant coach at Butler.

"God got a truly beautiful angel in him. As much as I will miss him I know he is in a better place. No more pain, sickness, needles, tubes, or doubt," Dees Johnson wrote on Facebook. "I am happy about that at least:) I just will miss him so much!"

Services for Dees were scheduled for Saturday at 2 p.m. at First United Methodist Church in Bloomington.