Jay Johnson Q&A: 'This is a really neat place' 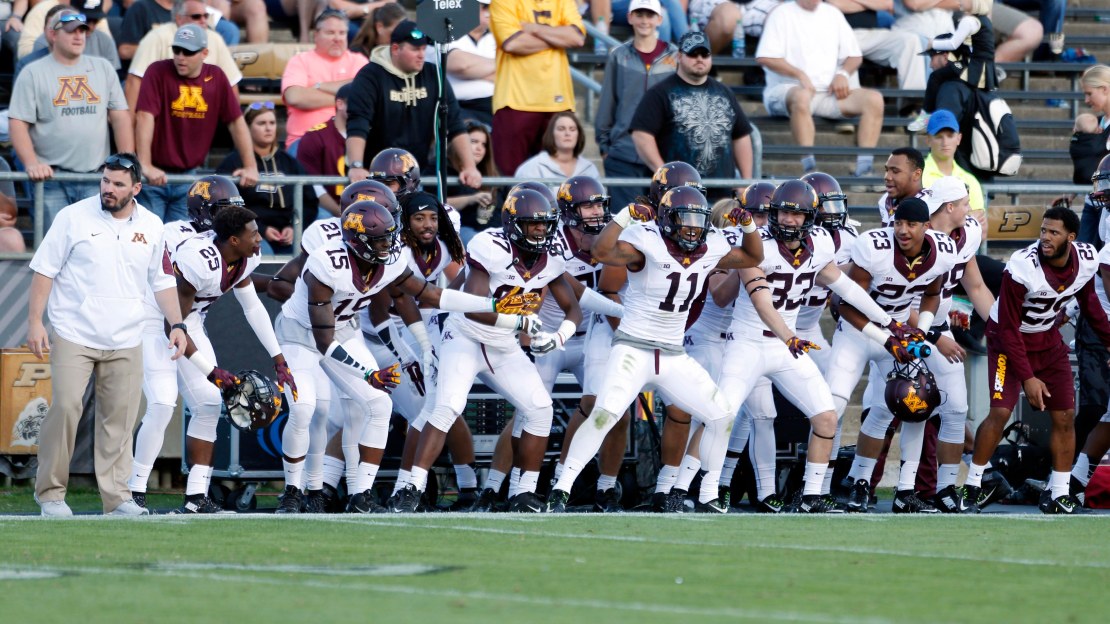 Change is brewing in the air at Minnesota. The Tracy Claeys era has begun. And he quickly put his stamp on things by shaking up the staff with a new offensive coordinator/quarterbacks coach and offensive line coach. Still, there is momentum coming off a bowl win that capped a disappointing 6-7 season.

Johnson is tasked with breathing life into a Gopher attack that last season ranked No. 13 in the Big Ten in scoring (22.5 ppg), 11th in rushing (144.1 ypg) and 12th overall (358.9 ypg). Johnson?s offense at Louisiana-Lafayette ranked 83rd nationally in rushing last season but was 24th in 2014. What to expect style-wise? Johnson employed a spread that often had the quarterback in the pistol formation and used lots of misdirection.

I caught up with Johnson-a star quarterback at Northern Iowa from 1989-92 who played with Kurt Warner–during spring drills. This new gig brings the Lakeville, Minn., native home. And, he?s excited about it.

Q: What are your early impressions of spring football?
A: It has been good. There always is a little bit of a learning curve. For the most part, I have been pleased with how the guys have adapted. A lot of us in the football world do a lot of the same things, but we call it different stuff. I think we have some guys who have the ability to make some plays. That has been encouraging.

Q: How would you describe the style you are bringing to the school?
A: I hope we can be balanced, multiple yet simple. I want to be able to run it and throw it. We are trying to mesh all of that together, starting with the run game and what we need to do. We emphasize that with our guys and carry that over to the throw game. We will try to create some scoring opportunities for us.

Q: Have any players stood out?
A: I really like our young running backs. I think Shannon Brooks and Rodney Smith are two really good, young talented guys. I have been very pleased with what they have done. I think we have some receivers who have done some real positive things. Rashad Still has really started to come on. I like some of the things he has done. Plus you have some other guys who have had some playing time who are showing signs of doing some positive things.

Our tight ends have been good and are important to what we do. Brandon Lingen is a very good football player. Him and Nate Wozniak, Colton Beebe who was redshirted is an up-and-comer. I am excited about those guys.

Mitch (Leidner) has started to do some things for us which is good coming off getting his foot fixed. Demry Croft and Seth Green are getting a bunch of reps. Conor Rhoda has come on and been solid. I like the future at that quarterback spot.

Q: How about the line?
A: We are trying to put that together. We have lost some guys to injury but we are making progress. (New offensive line coach) Bart Miller has done a great job. We have a couple junior college guys who have done some good things. They have added depth and caught on. We have some young guys we are trying to bring along. Tyler Moore who played a lot at center, I think he will be really solid. Jonah Pirsig is at right tackle and has a bunch of reps. But I like what the junior college guys are doing as we bring young guys along.

Q: What?s it feel like to be back home?
A: It is a neat deal. I grew up a Gopher fan. I had a dream to come back here, and I never would have imagined coming back in this capacity. But this is a really neat place. I am enjoying every moment of it.

Q: Who was your favorite Gopher growing up?
A: My grandparents were season ticket holders, as well as my mom and dad. The first game I saw was back in Memorial Stadium when Tony Dungy was quarterback. I saw a bunch of games at the Metrodome. I was young. Rickey Foggie and all the others over the years, Darrell Thompson, Jon Leverenz. A bunch of them. I have been all over the country in my job but have always kinda watched Minnesota.

Q: Were you recruited by Minnesota coming out of Lakeville North High?
A: I remember going to junior day. They recruited me but I didn?t meet what they needed at the time. I was a down-the-list guy for them. Not sure if I made the list. John Gutekunst was the coach at the time.

Q: Do you still have a relationship with Kurt Warner?
A: I know Kurt well. He was just a year behind me at Northern Iowa. We stay in touch. We text. We have talked recently since I got this job. It has been good. I would love to get him up here to visit. The players can lean on his expertise.