BTN LiveBIG: Kids with autism get help from Buckeyes and The Bard 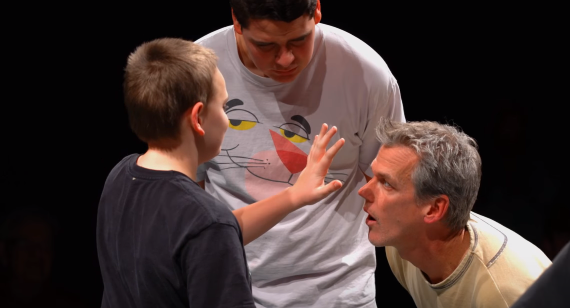 William Shakespeare?s ?The Tempest? is a treasure trove for the English language. Common phrases such as ?all the devils are here,? ?the stuff that dreams are made of,? ?the past is prologue,? ?strange bedfellows? and ?brave new world? are all either derived or pulled directly from the text.

When it comes to expanding people?s means of communication, The Bard?s works are a gift that keeps on giving. A great example of that is a program developed at The Ohio State University to help kids with autism spectrum disorders (ASD) improve their speech and facial expressions by engaging with ?The Tempest.?

The initiative, which unites the thespian talents of OSU?s Department of Theatre with the developmental disabilities expertise of the Nisonger Center, involves interaction between stage actors and children with autism. The former lead acting exercises that allow the latter to open up their emotions and expressions.

Why Shakespeare as opposed to, say, George Bernard Shaw or some other playwright? The answer lies in the way he wrote: His plays frequently employ meter and verse, exaggerated movements, and repetition.

?Those are key elements that kids with autism really thrive [on] and within which they can learn skills more efficiently,? explained Marc J. Tassé, director of the Ohio State Nisonger Center and professor in the departments of psychology and psychiatry.

According to Tassé, participants who went through the Shakespeare and Autism Research Project were measured against a control group of children with autism who didn?t go through it. He said the ones who participated in the 42-week program made significant strides in their ability to communicate and socialize over that time compared to their counterparts.

Kelly Hunter, artistic director of OSU?s Shakespeare and Autism Research Project, started working with children with autism 15 years ago. Early on, she used Shakespearean works to create sensory games to help those kids explore a range of emotions.

Hunter eventually brought her techniques to Ohio State?s Royal Shakespeare Company, where they were expanded and measured thanks in part to the Nisonger Center?s involvement.

She sees the program?s success as further demonstrating the deep, distinctive humanity in the works of this literary giant.

[btn-post-package]?Shakespeare gives you the opportunity to wake up to your own life,? Hunter explained. ?It?s not just about watching Shakespeare?s plays, it?s about thinking about yourself as you?re watching them and taking that one step further. [It gives] the children the opportunity to explore what it feels like to be themselves, which often in their locked-away world of autism, they don?t get the opportunity to do.?

Watch the one-minute video above to see how this program is making ?dramatic? improvements in the lives of kids with ASD.