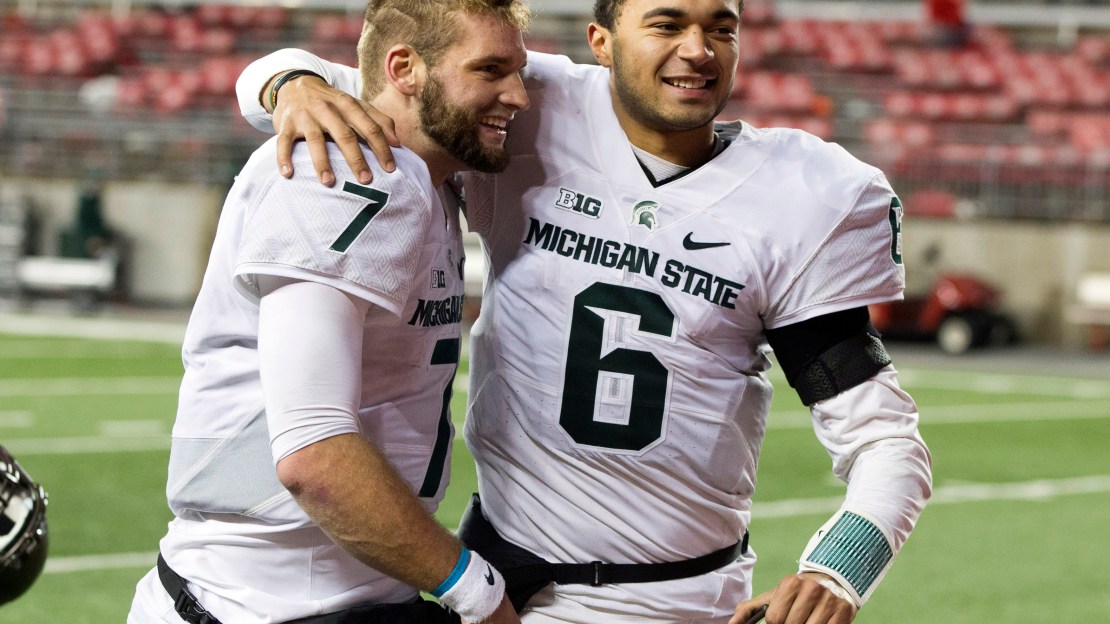 A three-year starter who finished his career as the winningest quarterback in school history with 34 victories (34-5 overall record, 23-2 vs. Big Ten opponents), Cook did it all for the Spartans during a spectacular career. The Big Ten Quarterback of the Year and the Unitas Award winner in 2015, Cook left campus as an all-time great. Now, the Spartans? BMOC is gone. What?s next?

Michigan State is one of several Big Ten squads that face a yawning hole under center. In fact, there are no less than nine schools with some type of question at quarterback.

Here they are, listed alphabetically.

INDIANA
Nate Sudfeld leaves as the school?s all-time leading passer. Who will pick up the slack under center? JC transfer Richard Lagow is on campus with a fat scrapbook and lots of potential. The 6-6 gunslinger-built along the lines of Sudfeld–signed with UConn out of high school, then walked-on at Oklahoma State before matriculating to a JC. Lagow and junior Zander Diamont figure to be the main competitors. The athletic Diamont has seen some duty the last two years when Sudfeld was hurt. Others in the mix are sophomore Danny Cameron, senior Nate Boudreau and redshirt freshman Austin King.

MARYLAND
The QB spot was an abomination last year in College Park, as Terp passers threw 29 interceptions-six more than the second-to-last school. Seniors Perry Hills (13 interceptions) and Caleb Rowe (15 interceptions) return and bring plenty of experience. Look for true freshman Tyrrell Pigrome to push both of them once he arrives on campus. He was the Gatorade Player of the Year in Alabama and really fits well into coordinator Walt Bell?s spread offensive style. Keep an eye on redshirt freshman Gage Shaffer. Hills probably is the front-runner when you consider Bell prefers an option attack and Hills is more mobile and athletic than Rowe. Plus, Bell's spread offenses historically haven't required a big-armed QB like Rowe.

MICHIGAN
Jake Rudock flew in last year from Iowa and saved the day as a graduate transfer, playing an efficient brand of football in leading Michigan to a smashing debut under Jim Harbaugh. Now, Rudock is gone. Who steps in? There is no shortage of candidates, with six competitors. Junior Shane Morris, who redshirted last year, has the most Big Ten experience, having played in eight games. Sophomore Wilton Speight is the only other contender who has played and looked good in relief of Rudock last year in taking Michigan to victory at Minnesota. And, he is making a move this spring. Keep an eye on John O?Korn, a transfer from Houston who was AAC Freshman of the Year in 2013. Redshirt freshman Zack Gentry was the QB gem of Harbaugh?s first recruiting class but has moved to tight end. Alex Malzone is another redshirt freshman in the mix. Early enrollee Brandon Peters is on campus and could be a factor. Harbaugh loves competition. And, he?ll have plenty of it here. Keep an eye on O?Korn, who may be the most talented of the bunch.

MICHIGAN STATE
Gone is Connor Cook, the winningest signal-caller in school history (34-5 record) and the school-record holder for most passing yards with 9,194 and passing TDs with 71. Senior Tyler O?Connor is the top contender. He is famous for starting and leading the Spartans to a huge win at then-national reigning champ Ohio State last season. Junior Damion Terry also returns after seeing some spot duty. Redshirt freshman Brian Lewerke also is in the mix.

NORTHWESTERN
Last year, Clayton Thorson won the job. But it took a while before he got used to being ?the quarterback. It?s a short list of teams that have won 10 games with a redshirt freshman under center, but he has something to prove for an offense that in 2015 ranked last in the Big Ten in scoring (19.5 ppg) and last overall (327.1 ypg). And the passing attack lacked big-play ability, as NU ranked-what else?-last in the conference (138.5 ypg). Thorson hit on just 50.8 percent of his passes, averaging less than 120 passing yards per game and throwing nine interceptions with only seven touchdowns. NU needs more. Zach Oliver is gone but Matt Alviti remains.

PENN STATE
Good or bad, the Christian Hackenberg era is over. The page has been turned on the uber-talented signal-caller, who left early for the NFL after an up-and-down career. Hackenberg never was a fit for Franklin?s system. Trace McSorley, Tommy Stevens and Jake Zembiec, an early enrollee, are fits. And they are battling for the job in the spring. A decision on who starts probably won?t be made until fall camp. These three options are dual-threats who are athletic and able to run. McSorley came on for an injured Hackenberg in the bowl game and almost rallied the Nittany Lions to victory. He has to be considered the favorite after hitting 20-of-40 passes for 185 yards and two TDs last year. The good news: Whoever is quarterback will have an array of skill-position talent to work with.

PURDUE
The quarterback situation has been a sore spot under Darrell Hazell, who has switched signal-callers during the season each of the last three years. This merry-go-round must stop if the Boilermakers hope for a breakthrough. Austin Appleby began last season No. 1 but lost his job and subsequently transferred to Florida. Who will be the guy this year? David Blough, who replaced Appleby, or Elijah Sindelar, a highly touted prospect who redshirted in 2015? Sindelar has a big upside, as the former Kentucky Mr. Football can really spin the ball. But can Hazell afford to turn over the offense to a first-time starter in what could be a make-or-break season for him?

RUTGERS
The offense is changing under Chris Ash, shifting from a pro-style to a ?power spread.? The attack basically will mimic Ohio State?s offense, as coordinator Drew Mehringer is a protégé of former Buckeye OC and current Houston coach Tom Herman. Both of last year?s signal-callers are back in Chris Laviano and Hayden Rettig. And they are the top contenders, as sophomore Giovanni Rescigno is a long shot. Laviano figures to have an edge in the competition since he started last year. And his skill set seems suited to what this attack wants to do from a dual-threat aspect.

WISCONSIN
Yes, Joel Stave had his limitations and often struggled for consistency. But he was an experienced quarterback who won a lot of games in Madison. Last year, Stave hit 60.8 percent of his passes for 2,687 yards with 11 touchdowns and 11 interceptions. He leaves school with 7,635 passing yards with 48 touchdowns and 37 picks. Who is it gonna be with Stave gone? Only three scholarship signal-callers are on the roster. Bart Houston will be a fifth-year senior, Alex Hornibrook redshirted as a true freshman last year, and Kare? Lyles is an early enrollee. Basically, it?s a two-man battle. Houston has more experience and played a lot vs. Illinois last year, while Hornibrook is a talented passer who committed to Paul Chryst when he was at Pitt and followed him to Madison.