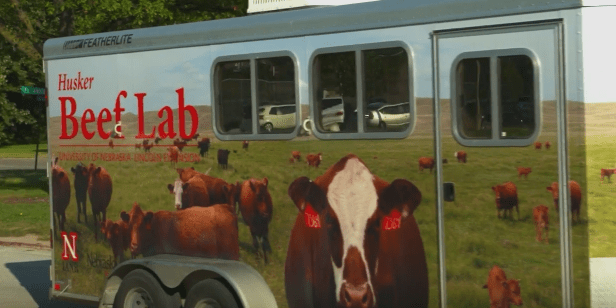 You might say that Rudy the cow is a bit of a rock star. Every year, this steer makes appearances at roughly 20 different schools and festivals across Nebraska, interacting with between 2,000-3,000 people who - in the name of science - put their hands inside his stomach.

You see, Rudy's not just any old bovine: He's the star attraction of the University of Nebraska's Husker Mobile Beef Lab.

"Rudy gives us the chance to talk about all things agriculture in the state of Nebraska," said Racheal Slattery, coordinator of the Mobile Beef Lab, a program operated by the school's agricultural extension. "He also gives us the opportunity to talk about the university and what we do. He's a really great conversation starter."

Rudy is outfitted with a special port, called a fistula, in his side that allows for access to his rumen, one of the four compartments that comprise the stomach of a cow. Via this port, people who don a special sanitary sleeve can reach inside the rumen and feel how the digestive system of this special cow operates. And Rudy never feels any pain during this process, since there are no nerve-endings in the rumen.

"I thought it was very fun," said Tristian Swift, an eighth-grader at Culler Middle School in Lincoln, Neb. "It was obviously the first time I ever got to put my hand inside a cow's stomach. I think it's cool that there's people nice enough to come out and let me experience new things that I've never done before."

According to Slattery, a normal school visit with the Husker Mobile Beef Lab begins in the classroom. Teachers typically pair the experience with a unit covering different scientific areas, from the biology of digestion to symbiotic relationships between large animals and the beneficial microbes they host.

[btn-post-package]Students are then introduced to Rudy and allowed to interact with him, petting his soft nose and scratching behind his ears. After getting acquainted with the cow, the students are allowed to reach inside and feel the muscular contractions of the rumen as it breaks down grain. Samples are also taken from the rumen and put under the microscope, so students can get a close-up look at the flora and fauna that live inside Rudy.

And, as Slattery notes, it's an encounter that many of the students wouldn't get to have without the Husker Mobile Beef Lab. More than a third of the kids who come to the trailer have never even been around a livestock animal.

"It gives the opportunity to experience something that they would never get to experience," he said. "It gives them the same quality education as anyone else in this city or state. It opens up doors for further education.

"Do I expect all of my students to want to become scientists? I expect them to be anything. I just want them to see what learning can do and what they can actually take from it."