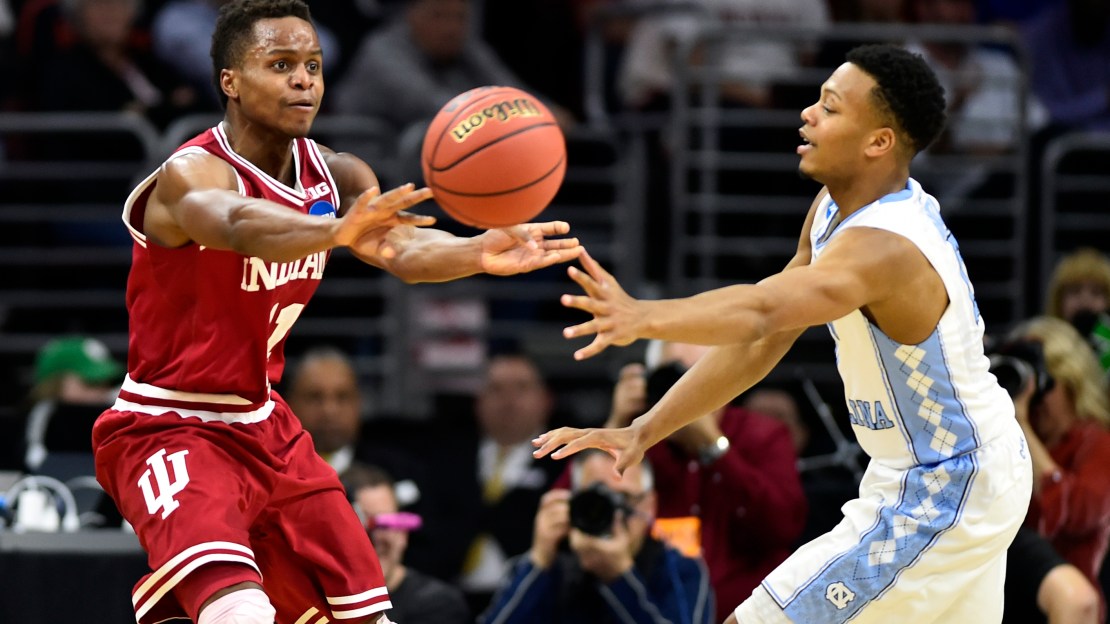 (AP) The Yogi years are over at Indiana.

Kevin "Yogi" Ferrell, who joined the long line of successful Hoosier point guards, had his career come to an end Friday night when the fifth-seeded Hoosiers were swamped 101-86 by top-seeded North Carolina in the semifinals of the East Regional.

"Emotions are high. To lose a game in the Sweet 16, didn't get to where we wanted to get," said Ferrell, who had 25 points and four assists. "But just reflecting back on all the four years I've had at IU, had a lot of accomplishments, and I felt I gave my all to IU. And at the end of the day I'm glad that Coach (Tom) Crean took me to come to this university. I met a lot of people. Learned a lot of great things, and it's just something that I'll remember."

"Yogi is leaving here as one of the great winners, and it's really no way anybody's going to be able to take that away from him," Crean said. "He's won two outright (Big Ten) championships in four years. And he leaves obviously with the accolades, was a part of our two Sweet 16s in the last five years."

Troy Williams, who finished with 21 points, added to the praise for Ferrell.

"Since I first got here, I seen the hard work that he put into this program. I seen how much it meant to him. I mean, throughout these years I've been with him always, everything I did is for the program, is for our seniors, and it's always been for Yogi as well," he said. "Just seeing what he does. He's just an inspiration to all of us, even to the coaches as well. It's more than just a friendship. It's like a family."

Marcus Paige finished with 21 points as North Carolina continued its offensive prowess, moving to the Elite Eight for the 20th time since 1975.

It will be the same case in the Midwest Regional, where top-seeded Virginia will face 10th-seeded Syracuse, meaning at least half the Final Four will be from the ACC. Since the East and Midwest champions play in the Final Four, the conference will have a team play for the national title.

"Definitely doesn't surprise me based on the quality of play in our league this year, it was fantastic," Paige said of the ACC's postseason success. "Top to bottom we had some really competitive games."

The Tar Heels and Fighting Irish split their two games in the regular season. Notre Dame won at home 80-76 and the Tar Heels did the same 78-47.

Brice Johnson had 20 points and 10 rebounds for the Tar Heels, who are in the regional final for the seventh time in coach Roy Williams' 12 years and for the first time since 2012.

Kennedy Meeks had 15 points for the Tar Heels while Justin Jackson and Joel Berry II both had 14.

Paige finished with six 3s, tying the North Carolina NCAA Tournament record set by Shammond Williams in 1998. Both did it in nine attempts.

North Carolina has scored at least 83 points in each of its three NCAA Tournament games and the Tar Heels kept up their incredible shooting from the second-round win over Providence.

The Tar Heels were scoring almost at will, especially inside, where the Hoosiers were no match for Meeks, Johnson and Jackson.

This was the 28th straight game North Carolina held its opponent to under 50 percent shooting. Only Maryland (50.8 percent) hit more than half its shots against the Tar Heels this season.

North Carolina led by as many as 22 points and Indiana was able to get within 10 points three times in the second half.

TWICE BEFORE: This was the third time these schools met in the NCAA Tournament and Indiana won both previous games. The Hoosiers beat the Tar Heels for the national championship in 1981 and they beat them again in 1984 in what turned out to be the last college game for Michael Jordan.

TIP-INS: Indiana: The Hoosiers became the seventh team to play in 100 NCAA Tournament games. They have a 66-34 record. … Indiana entered the game with four wins over Top 25 teams. … Indiana had never lost an NCAA Tournament game in Philadelphia, sweeping the Final Four in 1976 and 1981 for two of its five national championships. .. The Hoosiers are 5-4 all-time against No. 1 seeds.