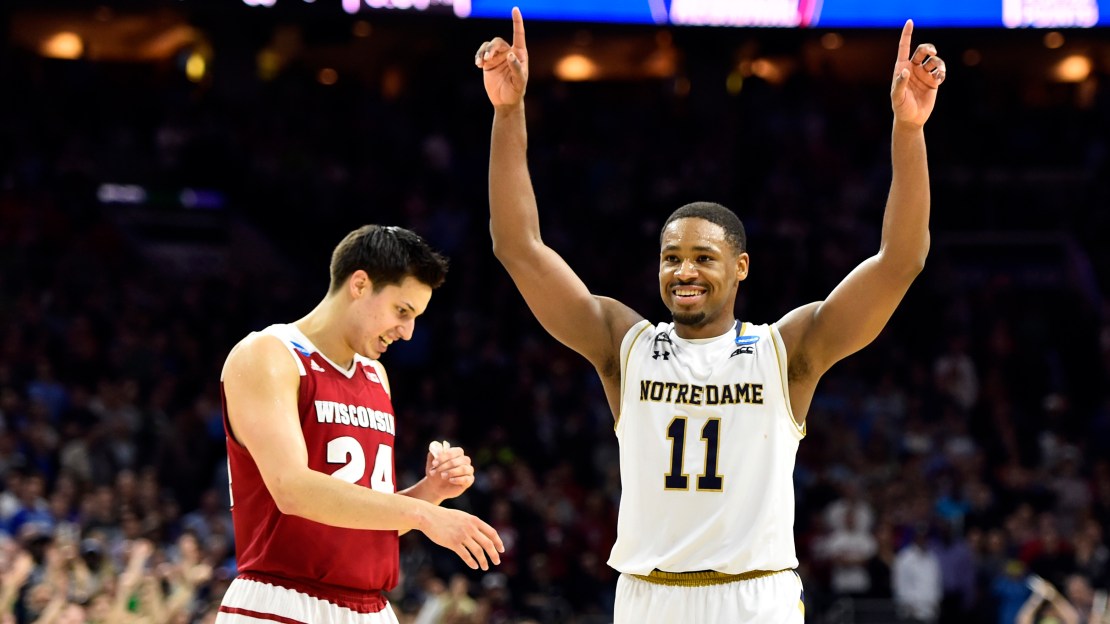 Wisconsin?s magic ride ended like a kick in the gut in the Sweet 16. After leading No. 6 Notre Dame for most of the game and failing to put away the poor-shooting Fighting Irish when they had a chance, the No. 7 Badgers let it slip away with some crucial late turnovers.

Wisconsin took a 51-46 lead with 3:06 left on a Nigel Hayes layup. But that?s when it all started to go wrong for the Badgers, who succumbed 61-56. It was a difficult end to a stunningly fun season.

In early January, Wisconsin was 9-9 overall and 1-4 in the Big Ten. A ticket to the Big Dance? It seemed to be a longshot at that point. This team was lost. But, it all changed after a loss at Northwestern that proved to be the nadir for the Badgers. Wisconsin went 11-4 from that point to now, advancing to the Sweet 16 for the fifth time in the last six years after getting to this point with a heart-stopping win vs. No. 2 Xavier in the second round.

But it?s all over now for a program that had been to the last two Final Fours.

Top star: Notre Dame?s V.J. Beachem led all scorers with 19 points. For Wisconsin, the key guy was Ethan Happ, the Big Ten Freshman of the Year. He tallied 14 points, hitting 6-of-12 shots with 12 rebounds before fouling out. The guy is a future superstar.

Top stat: No doubt, Wisconsin was done in by an uncharacteristic 17 turnovers, including two big ones late by Nigel Hayes and Bronson Koenig that proved to be costly as Notre Dame looks for its first Final Four since 1978.

The key to victory: The Fighting Irish were aggressive in attacking the hoop. And that paid off in ND going to the free-thrown line 14 times and hitting 13 of them (92.9 percent). Wisconsin? It had just six free-throw attempts and made four (66.7 percent).

It was over when: Vitto Brown drained a monster 3-pointer with 26 seconds left to give Wisconsin a three-point lead. The Irish?s Demetrius Jackson rushed down the court and scored a quick bucket to cut the Badger lead to one ? then Jackson stole the ball from Nigel Hayes and made a quick hoop to give the Irish a one-point lead it would not relinquish. It was a stunning reversal of fortunes. The Irish never looked back, forcing another Wisconsin miss and hitting two free throws before icing it by forcing yet another Badger turnover, this time from Bronson Koenig.

What?s next: Wisconsin (along with Michigan State) should be the favorite to win the Big Ten next season. Greg Gard?s squad will have back talent like Nigel Hayes, Ethan Happ, Bronson Koenig, Zak Showalter and Vitto Brown, among others. Plus, having Gard as the coach from the start should make everything even smoother. The future is bright for one of the nation?s top programs.