Dienhart: 16 Big Ten things to know for the Sweet 16 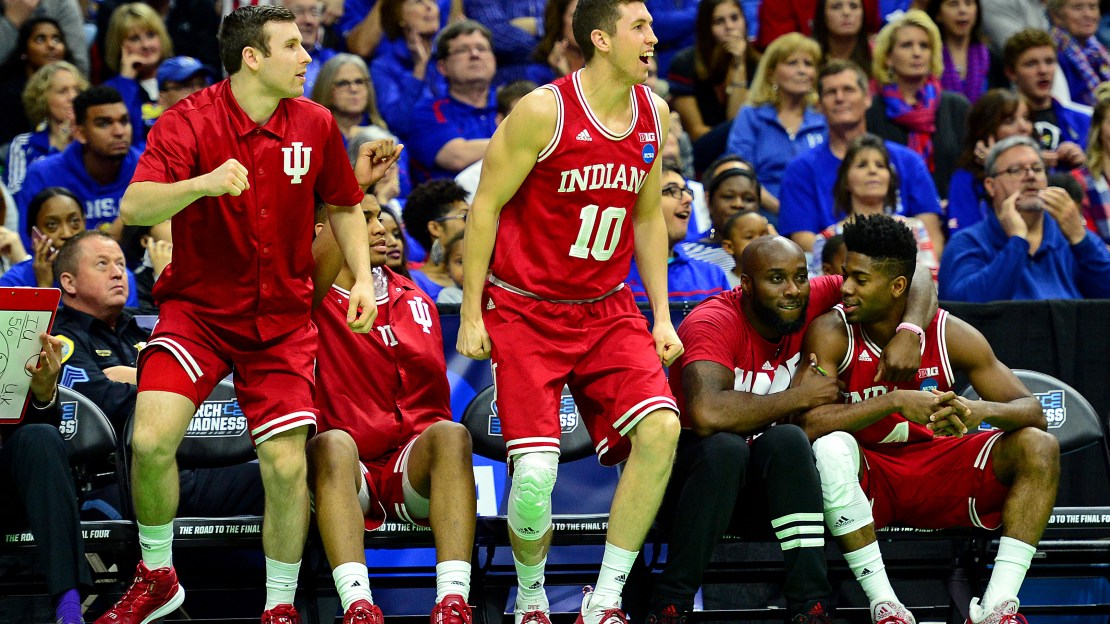 The 2016 NCAA tourney has been an exhilarating ride so far, with upsets and last-second shots bringing America to its knees while clutching its chest. The Big Ten has three schools that have survived and advanced to the Sweet 16: No. 5 seeds Maryland and Indiana, along with No. 7 Wisconsin.

Here are 16 things to know before tipoff.

1. Indiana and North Carolina have some juicy NCAA tourney history. This will be the programs' first meeting in the NCAA tourney since the Hoosiers beat the Heels 72-68 in the Sweet 16 in 1984 before falling to Virginia in the Elite Eight. IU beat North Carolina to win the 1981 national title behind Isiah Thomas.

3. Maryland last met Kansas in the Final Four in 2002. And the Terrapins won that battle of No. 1 seeds and went on to beat Indiana for the school?s only national championship with Gary Williams leading the charge. Maryland is 2-3 against Kansas all-time and has won two straight in the series.

6. Maryland coach Mark Turgeon played at Kansas from 1984-87 and was the first player in Jayhawks history to play in four straight NCAA tournaments. KU went 108-33 under head coach Larry Brown in that stretch. Turgeon served as team captain in his junior and senior seasons, leading the Jayhawks to the 1986 NCAA Final Four. Turgeon was also an assistant at Kansas for five seasons, first under Brown (1987-88) and then under Roy Williams (1988-92). Kansas won the national title in 1988 and finished second in 1991.

7. A win over Notre Dame would punch the Badgers' trip to the Elite Eight for a third straight season. Since the NCAA tournament expanded to 64 teams in 1985, only two Big Ten teams have made three consecutive Elite Eights: Michigan State (1999-2001) and Michigan (1992-94).

9. Playing in their 18th consecutive NCAA tournament, the fifth-longest streak in NCAA history, the Badgers are getting used to making trips to the second weekend and beyond. With wins over No. 10 Pitt and No. 2 Xavier, No. 7 Wisconsin advanced to the regional semis, becoming the nation?s only team to advance to the Sweet 16 in five of the last six seasons.

11. Wisconsin erased second-half deficits in each of its 2016 NCAA tournament wins. In fact, the Badgers have trailed at the half in six of their last 12 NCAA tournament games, as UW has come back to win all six.

14. Yogi Ferrell?s 20-point, 10-assist performance vs. Chattanooga in the opening round was just the second such game in IU NCAA history. Keith Smart posted 20 points and 15 assists on March 14, 1987 vs. Auburn. Ferrell had 18 points, five rebounds and four assists against Kentucky in the second round.

15. Melo Trimble scored 24 points and the Terps utilized a second-half surge to drop Hawaii, 73-60, in second-round action on Sunday in Spokane, Wash. Trimble is averaging 21.5 points during the tournament and is a scorching 22-for-23 (.957) from the charity stripe. Jake Layman is a stellar .579 from the floor during NCAA tournament play this season and is posting 18.5 points per contest.

16. The Big Ten is trying to win the conference?s first national title since Michigan State cut down the nets in 2000 in the now-razed RCA Dome in Indianapolis after beating Florida.