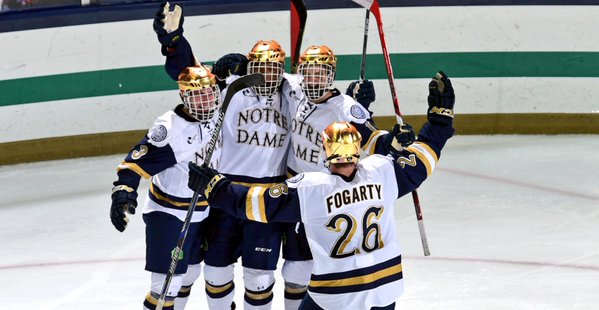 The proactive addition of Notre Dame means Big Ten hockey has yet another historically successful program with national appeal, and one with Big Ten ties, as longtime head coach Jeff Jackson played at Michigan State. Beyond its coach, Notre Dame has previously shared a conference with five of the six Big Ten hockey programs, the lone exception being Penn State, which made hockey a varsity sport in the 2012-13 season. The Fighting Irish were members of the CCHA with Michigan, Michigan State and Ohio State from 1992-93 through 2012-13. Prior to that, they were members of the WCHA with Michigan, Michigan State, Minnesota and Wisconsin from 1971-72 through 1980-81.

Notre Dame?s recent success has been impressive, as the Fighting Irish have qualified for the NCAA Tournament seven times in the past 11 seasons under Coach Jackson, twice reaching the Frozen Four.

From Notre Dame?s perspective, the move from the Hockey East allows for an improved student-athlete experience, complete with shorter travel times for players and families, as well as the renewal of aforementioned rivalries that energize fan bases in both arenas and watching on television.

Since forming prior to the 2013-2014 season, the Big Ten Conference has played with six member programs, and the coaches have spoken openly about the need for expansion. More quality teams–and Notre Dame certainly fits that description–means a better chance for the Big Ten to receive multiple NCAA tournament bids. In searching for both an academic and athletic fit, the Big Ten could not have done any better than the Irish, who will play Michigan in this year?s NCAA tournament, then represent Hockey East for one final season before joining the Big Ten.

The logical question now is ?what?s next?? There is no question that a seven-team league makes scheduling difficult, and if the Big Ten continues to play four games per year against every other school in the league, that means 24 conference games. First, how do additional conference games impact the league? I would argue it's a positive. The NCHC played a 24-game conference schedule this past year and qualified four teams for the NCAA tournament. Hockey East played 22 conference games and qualified six teams. Put simply, Notre Dame makes the league stronger from a Pairwise ratings standpoint, and that benefits all involved.

There also have been many questions regarding the addition of hockey programs at other Big Ten institutions. The process of developing a program from the club to varsity level is one that is years in the making. In addition, and more importantly, the financials of building an arena are extremely cost-prohibitive. It is my understanding that only Nebraska?s current basketball facility (Pinnacle Bank Arena) could be retrofit for hockey without a major renovation or complete rebuild.

In short, no matter which direction the Big Ten decides to head next, there is no question that the addition of Notre Dame strengthens the league both internally and from a national perspective. To renew historic rivalries with a program that is comparable from both an athletic and academic standpoint is the administrative equivalent of a natural hat trick and should be scored as such for Big Ten hockey.