Caleb Swanigan to declare for NBA Draft, will not hire an agent 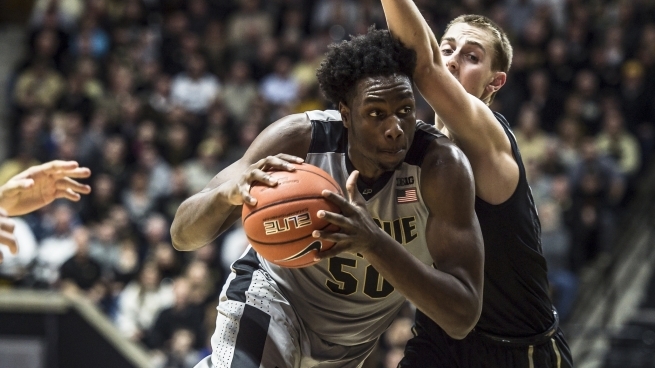 Purdue freshman Caleb Swanigan has announced his intention to declare for the 2016 NBA Draft, but will not hire an agent, maintaining his amateurism.

Swanigan will put his name into the NBA Draft, making him eligible to be drafted on draft night on June 23, 2016. He will be able to start attending workouts scheduled by NBA teams on April 26 and is eligible to compete in the NBA Draft Combine on May 10-15, 2016, in Chicago. He then has 10 days (May 25, 2016, deadline) to weigh his options and keep his name in or withdrawal for the NBA Draft. Withdrawing his name from the Draft will maintain his eligibility in intercollegiate athletics.

Swanigan, a 6 foot 9, 250-pound forward from Fort Wayne, Indiana, was one of the nation?s top freshman during the 2015-16 season. He was named to the Big Ten?s All-Freshman Team after averaging 10.2 points, 8.3 rebounds and 1.8 assists per game in 34 contests this season. He won a league-best, three Big Ten Freshman of the Week (tied with Wisconsin?s Freshman of the Year Ethan Happ) accolades and was a finalist for the Wayman Tisdale Award given to the nation?s top freshman.