NCAA Tournament: What just happened? And what's ahead? 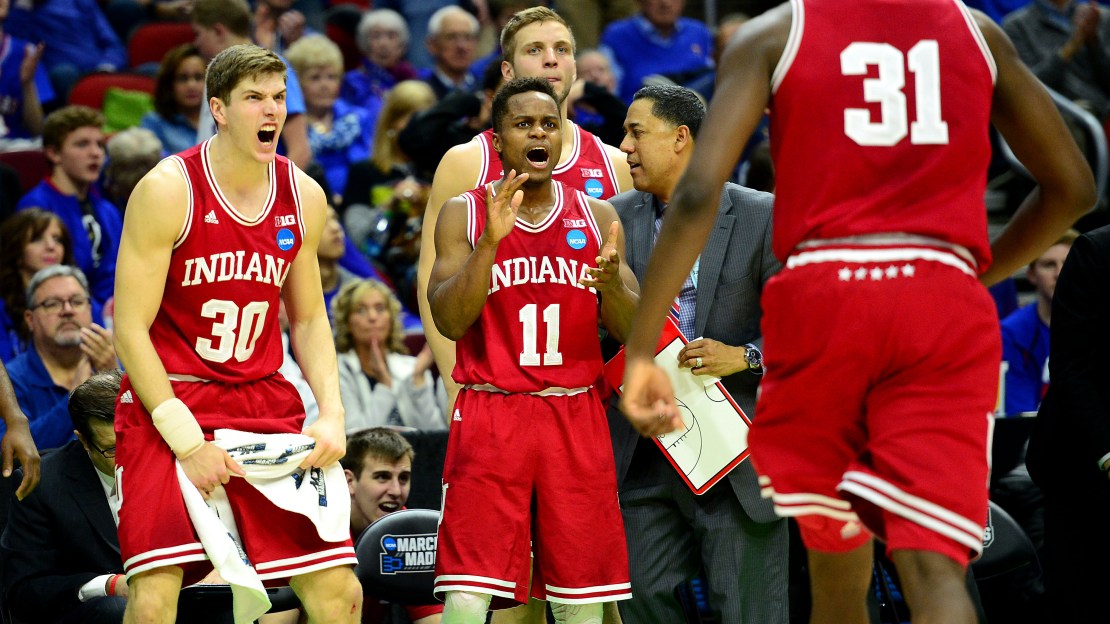 The opening week of the 2016 NCAA tourney will have a special place in the history of a storied event that often causes our hearts to stop. It was four full-throated days of magical mayhem, with big shots and zany upsets the order of the day.

The Big Ten had its share of big moments ? and heartbreaking setbacks.

Here is a look back ? and glance ahead at the Sweet 16 week.

Best play: Bronson Koenig vs. Xavier. C?mon. This is an easy one. It?s the falling-out-bounds-I-can?t-believe-it bomb launched from the corner by Koenig that put a dagger in No. 2 Xavier?s Sweet 16 hopes and launched the Wisconsin point guard into March Madness lore. It was the second nails shot Koenig hit in the final minute, as he drained an impossibly long rocket from beyond the arc to tie the game. Two tough shots. What else would you expect from a guy named after Charles Bronson?

Most underrated play: Rasheed Sulaimon vs. Hawaii. Back-to-back between-the-legs dribbles? Check! Killer spin move? Check! It was only a floater, but Sulaimon's second-half highlight vs. Hawaii is something I could put on repeat.

Best reax: Mark Turgeon vs. Hawaii & Frank Kaminsky. Had to go with a tie here, as the former was a riot to watch on the sideline before, during and after Melo Trimble's 3-pointer, Maryland's lone triple vs. Hawaii, and the latter set social media on fire with his celebration to Bronson Koenig's game-winning buzzer-beater.

Best chance to reach the Final Four: Indiana. The No. 5 Hoosiers are playing about as well as any team that is still in the dance. IU flicked away No. 12 Chattanooga and then bettered No. 4 Kentucky-a team many had ticketed for the Final Four in Houston. Now, the Hoosiers take on No. 1 North Carolina in the East Region semifinals. It?s the second game in a row vs. college basketball royalty for IU. And, you have to like Indiana?s chances, primarily because of this team?s versatility, offensive prowess, underrated defense ? and senior point man Yogi Ferrell. If the Hoosiers topple the Tar Heels, they would take on the winner of No. 6 Notre Dame vs. No. 7 Wisconsin. Interesting. The Hoosiers have not been to the Final Four since 2002, when they lost the national championship game to Maryland. This will be Indiana?s first meeting with UNC in the NCAA tourney since the Hoosiers beat the Heels 72-68 in the Sweet 16 in 1984 before falling to Virginia. IU beat North Carolina to win the 1981 national title behind Isiah Thomas.

Best stat: Thanks to Bronson Koenig's last-second heroics, Wisconsin advanced to its fifth Sweet 16 in the last six seasons, the only team in the nation to do so.

Best stat line: Yogi Ferrell. The Indiana point guard's full array of talent was on display on the opening weekend, averaging 19 points, three rebounds and seven assists, to go along with just 1.5 turnovers, in wins vs. Chattanooga and Kentucky.

Best chance to pull an upset: Indiana vs. North Carolina. I have the Hoosiers as the the Big Ten's best chance to reach the Final Four above, so they have to be the answer here. It won't be easy to dispatch No. 1 North Carolina, but the Hoosiers have the talent and athleticism to give any team in the nation fits on any night. And, as they always say, March is all about guard play, and it doesn't get much better than Indiana star point guard Yogi Ferrell, who can score and set up teammates with equal aplomb.

Most surprised they are still here: Wisconsin. The seventh-seed in the East didn?t exactly enter the Big Dance on fire. In fact, Wisconsin had lost two in a row, losing the regular-season finale at Purdue 91-80 and then getting dumped by Nebraska 70-58 in its opening Big Ten tourney game. Was Wisconsin ready for the bright lights of March? Apparently so, as the Badgers have topped No. 10 Pitt 47-43 and then No. 2 Xavier 66-63. Now, a winnable game vs. No. 6 Notre Dame looms. Win that, and a third trip in a row to the Final Four would be on line ? possibly vs. No. 5 Indiana, a team the Badgers split with this season-as each team won at home.

Most stunning loss: Michigan State vs. Middle Tennessee. Losing to a directional school never is a good thing. But, that?s what No. 2 seed Michigan State did when it got stunned by No. 15 Middle Tennessee in the opening round. It was one of the biggest shockers in NCAA history; actually, it may have been the biggest when you consider many pundits tabbed the Spartans to win it all. The Spartans hadn?t lost a first-round NCAA game since falling to UCLA in 2011. But you have to go back to a 1995 first-round loss to Weber State to find a more stupefying March defeat for MSU.