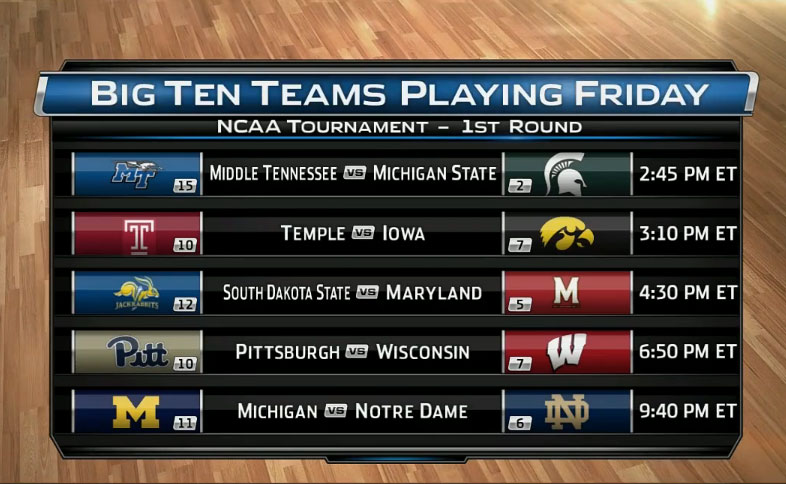 Michigan State takes the lid off its NCAA tourney experience in what it hopes will be not just a Final Four run-which would be the eighth for Tom Izzo-but also a national title. The Big Ten hasn?t won it all since 2000, when the Spartans cut down the nets. I like Michigan State?s chances.

Will Iowa have a short NCAA run? Unlike Purdue, which began the tourney as a hot team, the Hawkeyes limp into the Big Dance. This is a great opportunity for Iowa to make amends for a season that got off the rails after a scintillating 10-1 Big Ten start. The key: Mike Gesell. The Iowa point man must regain his mojo.

Indiana did not look like a No. 5 seed in destroying Chattanooga. The Hoosiers showed no hangover from their flop in the Big Ten tourney, with Yogi Ferrell playing outstanding. He is the key guy. IU could be in line for a nice run. This could be fun. But the next game vs. Kentucky will be a huge test. Win that, and No. 1 North Carolina may be looming. What an opportunity for IU to trumpet its return as an elite program.

Purdue?s stay in the Big Dance was brief. And very disappointing, as the Boilermakers fell to No. 12 Little Rock in the first round in double OT after blowing a late double-digit lead. A season that at one point that had some thinking Purdue could win the Big Ten and make the Final Four ended in a heap with nothing to show for it. This team has to get better guard play-especially at the point.

On the football front, when Jim Harbaugh had his Michigan squad in Florida over spring break, the Spartans held ?Michigan? week back in East Lansing.

"We looked at them top to bottom, every day … the week they were down in camp," Mark Dantonio said. "We're just working, (and) we're just preparing. I'm just talking about offseason studies."

Mike Griffith of Mlive.com notes that the Spartans have a year-round countdown clock to the Michigan game in their football building, never wanting the significance of the rivalry with the Wolverines to be too far from their minds. Michigan State has won the past three meetings against Michigan and is enjoying historic success in the rivalry, having won seven of eight for the first time in the series' history. The arrival of Harbaugh makes this rivalry even juicier.

A guy to watch in spring drills for Nebraska: DE Freedom Akinmoladun. He has to become a pass-rushing force.

The great Jon Nyatawa of Omaha.com says Akinmoladun and senior Ross Dzuris are the most experienced of the bunch up front. Junior A.J. Natter and sophomore Sedrick King haven?t emerged yet. DaiShon Neal spent a redshirt year recovering from injury, and Alex Davis used his year off to get stronger - but both are still raw. There?s a possibility that senior Greg McMullen rotates outside some next fall, though he?s experimenting on the interior this spring. So there?s growing expectation for Akinmoladun. The pressure is mounting, too. NU needs him. He knows it.

One of the first points Gruden made when sitting down with Jones was the fact that Jones went through his career at Ohio State without throwing the ball with his fingers on the laces. He chucked the ball while holding it from the back, which is rare for quarterbacks to do on every throw. I still wonder how good of a pro Jones will be.

New Illinois coach Lovie Smith?s staff is coming together nicely. In fact, it is now complete. And I like it, especially OC Garrick McGee.