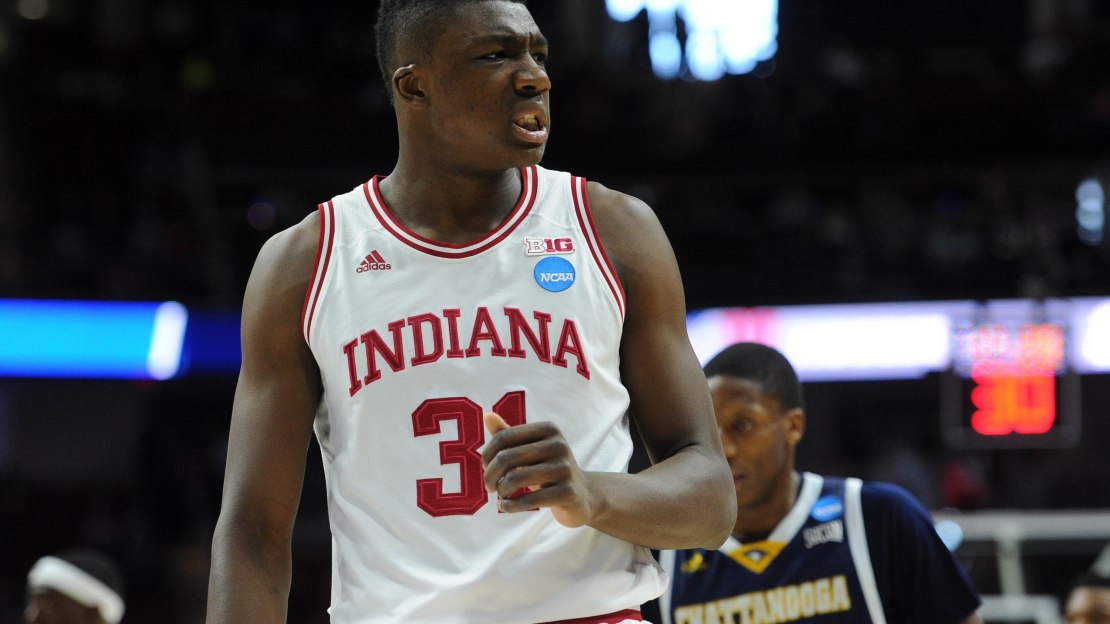 The No. 5 Hoosiers put their Big Ten tourney flop in the rear-view mirror with a resounding win vs. No. 12 Chattanooga, 99-74.

This is a dangerous Indiana squad that has a load of offensive talent-even with James Blackmon out for the year with injury. The Hoosiers had five players in double figures tonight led by Yogi Ferrell?s 20 points. Troy Williams had 12 points; Thomas Bryant 13; Max Bielfeldt 10; OG Anunoby 14.

The two other No. 5 seeds lost to No. 12 seeds today, as Purdue (Little Rock) and Baylor (Yale) both fell.

No. 5 Maryland takes on No. 12 South Dakota State tomorrow.

The star: Yogi Ferrell. For the first time in his career, the senior point man had 20 points and 10 assists in a game. He hit 6-of-13 shots, including 4-of-7 from 3-point land. Ferrell also had just two turnovers. This is why he is one of the top point guards in the nation, a truly special talent who can lead this squad a long way. He makes everyone better.

The stat: 23, assists for Indiana, which showed this team?s deft ability to move the ball around and get open shots. The result? A sizzling 64.9 percent shooting percentage (37-of-57).

It was over when: Indiana led, 46-37, at halftime. But the Hoosiers quickly blew open the game early in the second half. With 16:47 left, Indiana led, 60-43, and it basically was over from there as the Hoosiers shot 64.9 percent overall and 58.8 percent from 3-point land.

What?s next: Indiana will play No. 4 Kentucky in the second round. Can Indiana handle the Wildcats? This showdown in the second round between college basketball royalty has many jacked. And it should. They last met in 2012 and haven?t since, as the parties can?t agree on venues. This is a series between bluebloods that began in 1924, has been played 55 times, and is full of vitriol.

Notable: This was Indiana?s first NCAA win since it downed Temple in a second-round game in 2013. The Hoosiers lost to Wichita State in its opening NCAA game last year.