NCAA tourney at a glance: No. 2 seed Michigan State 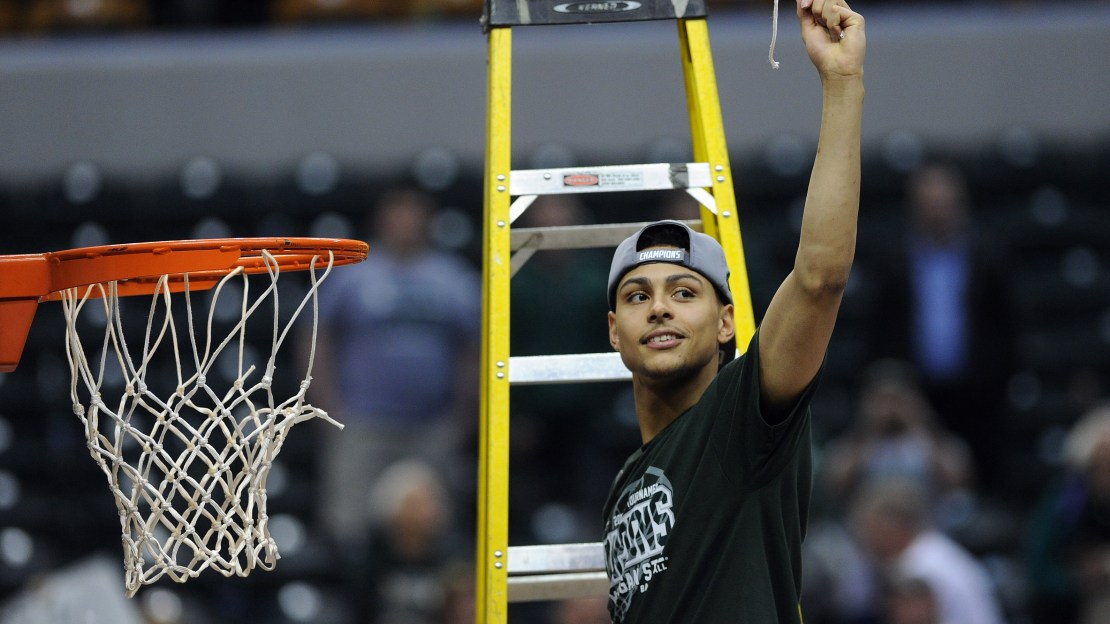 There were many dubious seeds in the NCAA bracket when it was announced on Sunday. But perhaps no seed raised more eyebrows of surprise than Michigan State being slotted as a No. 2 in the Midwest. The Spartans, No. 2 in the AP poll, appeared to have the resume of a No. 1 seed coming off a Big Ten tourney title, winning nine in a row and 13 of their last 14 games since a three-game losing skid in mid-January.

Regardless, Michigan State no doubt will use this perceived slight as motivation to reach the Final Four for the eighth time in Tom Izzo?s glorious tenure in East Lansing and second year in a row. In fact, the Spartans just may win the Big Ten?s first national championship since 2000. Michigan State seemingly has it all in a superstar in Denzel Valentine, great three-point shooting, depth, ruggedness, chemistry, motivation, defense and great coaching.

Get my Michigan State NCAA capsule below.

How I see it going: It?s Final Four or bust for Michigan State, which is playing as well as any team in the nation. The Spartans? first three foes figure to be little more than speed bumps along the road to Houston and the Final Four. First up is Middle Tennessee, which won?t know what hit it. Then a game with Dayton or Syracuse will be next. No problem. Next up would be a Sweet 16 game, most likely vs. Utah. Win there and it sets up a likely Elite Eight game vs. No. 2 Virginia, which has been dispatched from the last two NCAA tourneys by Michigan State. Once in the Final Four, the Spartans just may win it all, most likely needing first to beat No. 1 North Carolina and then No. 1 Kansas in the title game, a team Michigan State beat earlier this season.

Key player: Bryn Forbes. Look, you know the Spartans will get production from Denzel Valentine, a do-it-all talent without peer in the nation. The key to big-time success will be Forbes and his ability to drain bombs from beyond the arc. No one in America is a better marksman, but Forbes was off his game of late. In the last four contests, the senior has hit just 5-of-23 from long range after nailing 26-for-40 in the previous four. For the season, Forbes is hitting 48.4 percent (108-of-223) from beyond the arc.

Key number: +16.4, Michigan State?s scoring margin, which is tops in the Big Ten. The Spartans average 79.8 points and give up 63.4. This is a deep team with myriad offensive options that plays its always famously tough defense. It?s a lethal combination that makes Michigan State formidable and the pick of many pundits to win it all.

Know Middle Tennessee: Middle Tennessee will be making its second NCAA Tournament appearance after claiming the Conference USA tournament title. The Blue Raiders boast four players who average double figures led by beefy guard Giddy Potts (15.0 ppg). He missed three games of late with a concussion but has returned to full strength. Potts averaged 15 points in the three C-USA tournament games and shot 7-for-11 from three-point range. The Blue Raiders? frontcourt, led by Reggie Upshaw and Perrin Buford, figures to wilt vs. the Spartans? muscle-bound front paced by Matt Costello and Gavin Schilling along with freshman phenom Deyonta Davis.