NCAA men's tourney at a glance: No. 7 seed Iowa 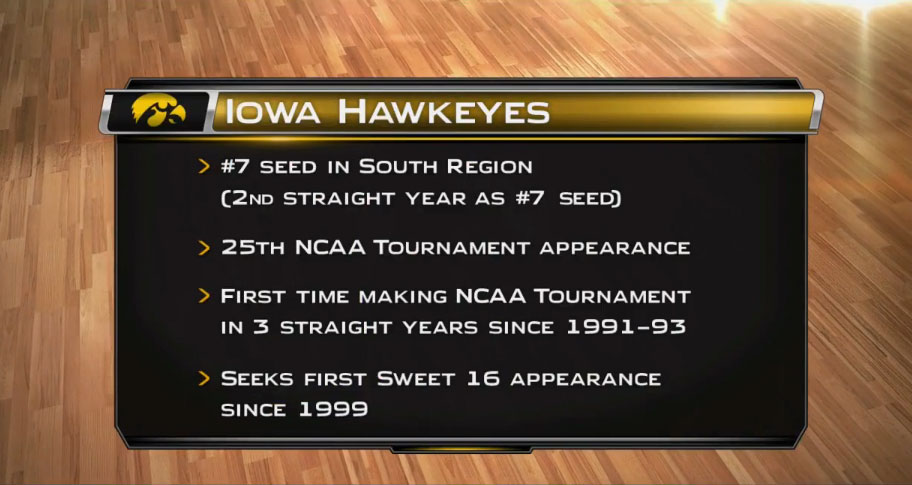 Iowa is back in the NCAA tourney as a No. 7 seed for the second year in a row. This is the Hawkeyes third appearance in a row, the first time the program has pulled off that trifecta since 1991-93. But Iowa hasn?t reached the Sweet 16 since 1999.

This year the Hawkeyes wheezed across the finish line, going 2-6 in their last eight games and getting dumped by Illinois in the Big Ten tourney game.

Will the veteran Hawkeyes who start four seniors and a junior snap out of it and regain their midseason form that saw them sweep Michigan State and Purdue? What once looked like a season of glory that included a Big Ten title has morphed into one of unfulfilled promise.

Here's my Iowa NCAA tourney capsule with more to come leading up to the tournament opners.

Last tourney appearance: 2015, lost to Gonzaga in second round

How I see it going: Iowa most likely will win one game ? and then head home, as a game with No. 2 Villanova appears to be a good probability. The Wildcats take on No. 15 UNC Asheville. You may recall Iowa tussled with 'Nova in 2013-14 regular season, falling in OT.

Key player: Mike Gesell. We know all about Peter Jok and Jarrod Uthoff. They've proven to be unabashed stars who will show up and do their part. But for the Hawkeyes to have any hope of recapturing the glory they enjoyed earlier this season when they jetted into the top five with that 10-1 Big Ten start, Gesell needs to rediscover his mojo. He has scored an aggregate 16 points the last three games with no free-throw attempts. This team?s offense is stagnant and needs Gesell to contribute more for a listing offense.

Key number: Iowa tallied 70 or more points in all but two of its first 25 games. But the Hawkeyes have notched less than 70 in three of the last six games.

Know Temple: The Owls are hot, winning 10 of their last 13 games. And they won the American Athletic Conference title before falling in the semifinals of the league tourney. Temple has three double-digit scorers in Obi Enechionyia, Quenton DeCosry and Jaylen Bond but isn?t an offensively explosive team. The Owls, however, are not very careful with the ball, ranking No. 1 in America in turnovers. Temple is a tough defensive team that can rebound and is well-coached under Fran Dunphy.