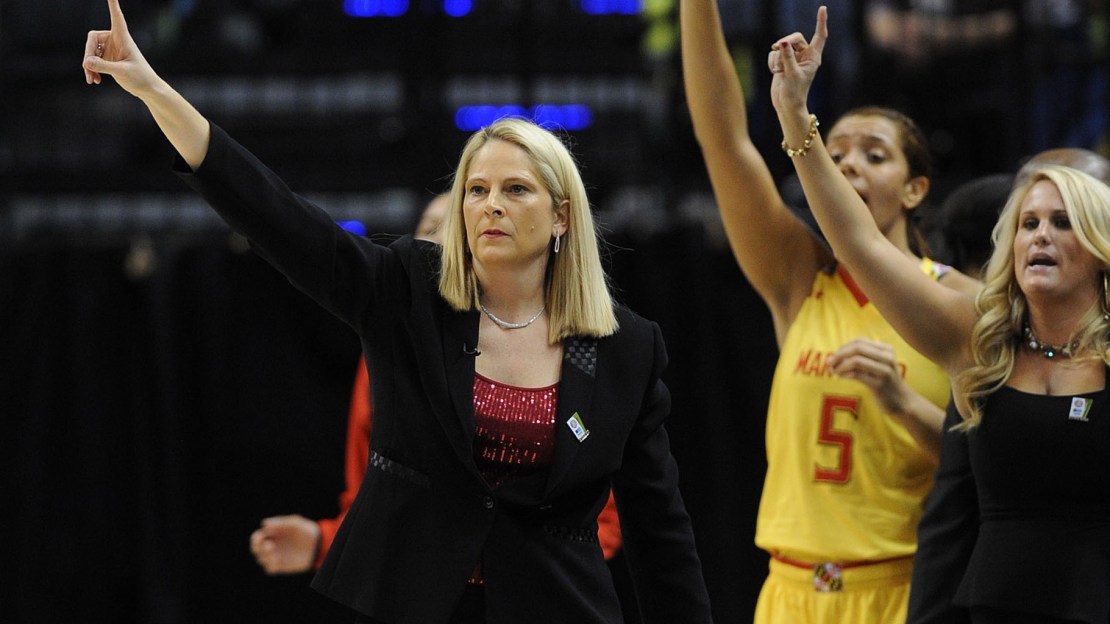 Here's the full bracket on NCAA.com, as well as a printable version.

Maryland, winners of the Big Ten regular season and tournament championships, enters the NCAA Tournament as a No. 2 seed in College Park, MD., and will take on No. 15 Iona at 1:30 p.m. ET on Saturday on ESPN2. The Terrapins are hosting as part of the Lexington Region and a win will allow them to face either No. 7 Washington or No. 10 Pennsylvania in second-round play.

Maryland enters its 24th tournament appearance and is is coming off back-to-back Final Four appearances. The Terrapins are making their 24th appearance in the tournament and won the NCAA Championship in 2006. Read more at UMTerps.com.

Ohio State hosts the NCAA First and Second Rounds in Columbus. The Buckeyes drew a No. 3 seed and will tip against No. 14 Buffalo at 2:30 p.m. ET on Friday on ESPN2. Ohio State enters its 23rd NCAA Tournament and will face the winner of No. 6 West Virginia-No. 11 Princeton with a win. Read more at OhioStateBuckeyes.com.

Michigan State enters its seventh consecutive NCAA Tournament and 15th overall as the No. 4 seed and will take on No. 13 Belmont at Noon on Friday on ESPN2 on the campus of Mississippi State. Should the Spartans advance, they will face either host Mississippi State or No. 12 Chattanooga as part of the Bridgeport Region.

MSU is the No. 4 seed playing in Starkville on Fri. vs. Belmont at 12! Are you ready for the madness? #MarchMadnesshttps://t.co/6MpsvlLFFn

In a statement, Michigan State explained why MSU isn't hosting their game. When MSU signed the agreement with the Michigan High School Athletic Association to host the tournaments in February 2011, the NCAA Tournament format didn?t provide opportunities for the Top 16 seeds to host the opening rounds. But the the NCAA Tournament later changed its format, providing the Top 16 seeds with the opportunity to host the first and second rounds. MSU will honor the agreement with the high schools. Read more at MSUSpartans.com.

Making its fifth NCAA Tournament appearance, No. 9 seed Indiana faces No. 8 Georgia on at 9 p.m. ET on Saturday on ESPN2. The Hoosiers earned their first NCAA appearance since 2002 and enter the Lexington Region. With a first-round win, Indiana will square off against either host and No. 1 Notre Dame or No. 16 North Carolina A&T. Read more at IUHoosiers.com.

#iuwbb is in the NCAA Tournament for the first time since 2002. #MarchMadness https://t.co/CmlbXHY5Np

In the Lexington Region, Purdue drew a No. 11 seed and will take on No. 6 Oklahoma at 1:30 p.m. ET on Saturday on ESPN2. The Boilermakers are making their 25th overall NCAA appearance and fifth consecutive. Purdue won the NCAA Championship in 1999. Should the Boilermakers advance, they will play the winner of No. 3 Kentucky-No. 14 UNC Asheville game. Read more at Purduesports.com.

Congrats @PurdueWBB on returning to the NCAA Tournament. Check out the team's reaction! #BoilerUp #NothingIsGiven https://t.co/Pn4QV9jPBi

Find all of our videos on our YouTube page, or in the playlist below.