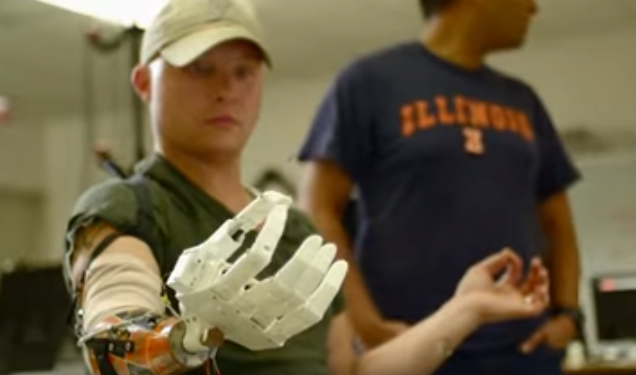 To reach out and touch something, to feel how hard or soft, durable or fragile it is, is one of the basic ways that humans interface with the world around them.

Yet, when a person loses a hand or arm, they?re stripped of that connection.

?Losing the ability to feel is just devastating.? Aadeel Akhtar said. ?You use it in every facet of life when you?re manipulating or coming into contact with any object.?

Akhtar, an M.D./Ph.D. candidate in neuroscience at the University of Illinois, is looking to give a bit of that sense back to amputees. Along with his team, Akhtar has developed a prosthetic hand that not only moves like a real appendage, but also can detect pressure via a sensor located in the index finger.

Using an affordable barometric sensor - it retails for less than five dollars, according to Akhtar - found in most cell phones, the hand is able to relay information on the variable pressure it is experiencing. That information is translated by low-level electrical output positioned further up the person?s arm.

?This is a way to give that fine-tuned precision back to the user,? he added. ?There?s been a ton of strides that have been made in the last 10-20 years in control of the hands. What?s been lacking is that sensory feedback aspect. What we want to do is what?s known as ?closing the loop.??

Another goal of the project is to make the prosthesis as low cost as possible. In its current iteration, the hand can be constructed for less than $1,000, making it more accessible to the scores of amputees worldwide that live below the poverty line.

As Akhtar explained, more than 80 percent of people who have upper-limb amputations come from developing nations, but less than 3 percent of them have access to affordable prosthetic care.

?It?s really important,? he said, ?to get these hands out to everyone who needs them all over the world.?

Blueprints for the hand are also made available to the public, allowing doctors and prosthetic engineers to access up-to-date schematics

?We created these designs and put out files for people on the Internet,? said Patrick Slade, a mechanical engineering student at Illinois working on the project. ?Through 3D printing, we can have people around the world make their own devices without us actually having to assemble them and then send it to them.?

[btn-post-package]Currently, the work of Akhtar and his team is being done in the lab of Dr. Timothy Bretl, an associate professor of aeronautical engineering at UIUC. The Bretl Research Group works on a range of projects, from more attainable robotics for small-business automation to increased efficiency and safety in building construction.

?I want all of my students to be happy and productive and working on projects that have high impact on real people,? Bretl said. ?The work that Aadeel is doing on prosthetics falls squarely into all of those categories, and I?m thrilled that he?s doing it.?

And, as Bretl pointed out, it would be difficult to do that without the culture and support of the University of Illinois.

Watch the one-minute video above to learn about this breakthrough device.