Selection Sunday: Breaking down the Big Ten & the Bracket 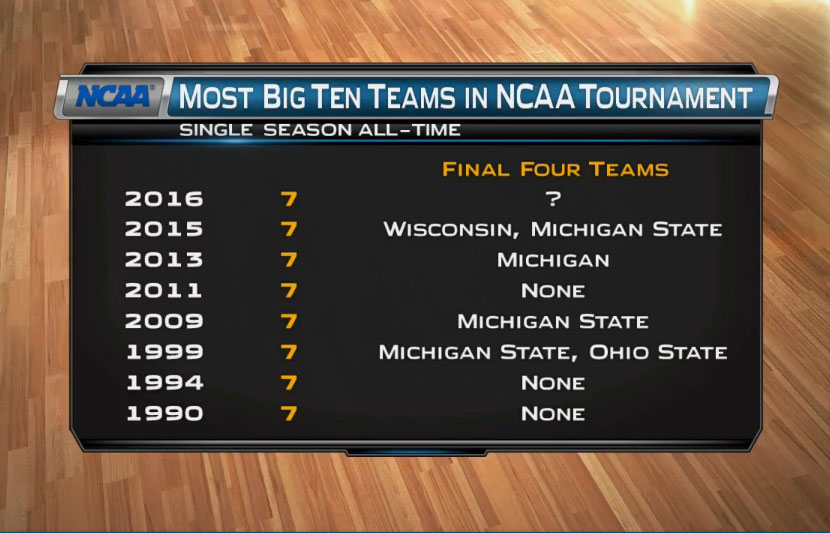 Here's my look at the Big Ten and the overall bracket. We have a few days to look at the individual matchups, and we'll do that, too.

Seeded too high: No. 11 Michigan. Some folks are a bit surprised that the Wolverines made the field. No doubt, their win vs. No. 1 Big Ten tourney seed Indiana sealed the deal. Still, did Michigan merit inclusion? Regardless, here are the Wolverines as a No. 11 seed in the East in a play-in game vs. No. 11 Tulsa.

Seeded too low: No. 5 Maryland. A great case can be made for Michigan State, which had the resume of a No. 1 seed but is a No. 2. Yes, the Terps struggled down the stretch, going 3-6 in their last nine games. But this is a talented team that was the pick of many to win the Big Ten and was talked about as a No. 1 team in the nation back in October. The Terrapins played Michigan State to a near standstill on Saturday in the Big Ten tourney semifinals. This is a talented team in the South. The issue: No. 1 Kansas is in the same region.

Toughest potential second-round game: America would love to see No. 5 Indiana play No. 4 Kentucky in the second round in the East. Sure, this isn?t a vintage Wildcats team, but John Calipari has his crew playing well. These two programs drip with history and used to play annually. But they haven?t met since March 2012 in the Big Dance, a win by UK. The Cats have won four of the last five. And the one Hoosier victory in that span was an epic 73-72 win vs. No. 1 Kentucky in December 2011.

Best opening matchup: I like Iowa vs. Temple in the South. Yes, No. 7 Iowa melted down late in the season, but it still is talented team that is led by four seniors and a stud junior in Peter Jok. The Owls won the American Athletic Conference but are just a No. 10 seed.

Sleeper: Indiana. The slap in the face the No. 5 Hoosiers took from Michigan in the Big Ten tourney may be just what the doctored ordered. This is a talented IU team that has the makings of a squad able to pull off a deep run. The best asset: a star senior point guard in Yogi Ferrell. Indiana may be the dark-horse of the entire tourney but must deal with No. 1 North Carolina in its East bracket.

Easiest path to the Final Four: No. 2 Michigan State in the Midwest. Look, the Spartans probably should have been a No. 1 seed. So, you know Tom Izzo and Co., are hacked off and will play the disrespect card as motivation. No team is playing better than Michigan State, which has won nine in a row and 13 of 14 games. No one in the first or second round looks capable of toppling MSU, with No. 3 Utah the biggest threat. C?mon. It all points to a showdown with No. 1 Virginia in the Midwest, the team that stole the Spartans? to seed. Think Sparty will be pumped to tango with the Cavs? You betcha. Bottom line: Izzo looks primed to make his eighth Final Four.

Toughest regional: South, which is where No. 1 overall NCAA tourney seed Kansas resides. The South also is the home of No. 5 Maryland and No. 7 Iowa. And the region includes No. 2 Villanova, which for most of the year looked like a No. 1 seed. Better wear your big boy pants to the arena.

Toughest draw: Indiana. In the East, the No. 5 Hoosiers must tussle with a dangerous No. 12 seed in UT-Chattanooga. Win that, and a game with No. 4 Kentucky looms. The schools used to play annually but have reached an impasses and the series has been halted. If IU reaches the Sweet 16, No. 1 North Carolina probably will be looming. Buckle up, Hoosiers. If you thought Tom Crean paced a lot before, wait?ll you see him on the sidelines in the NCAA tourney. He?ll wear a rut in court.

Best chance to get upset in first round: Let?s go with No. 7 Iowa in the South. Herky is on its heels, going 2-6 in its last eight games as it preps for No. 10 Temple. The last time we saw Iowa, it was getting unceremoniously dumped by Illinois in the Big Ten tourney. Fran McCaffery keeps saying all the right things about this team being OK, but the results aren?t there for a team that at one point ranked No. 5 in the nation and was 10-1 in the Big Ten.

Best chance to pull an upset in the first round: Let?s say No. 11 Michigan beats No. 11 Tulsa in a play-in game, and then the Wolverines dump No. 6 Notre Dame in a first-round game in the East. This isn?t a vintage Irish team. If Michigan is shooting well, it can pull the upset. Zak Irvin has to be a star.

Best player matchup: How about Indiana point man Yogi Ferrell vs. Kentucky point man Tyler Ulis? So sweet. This could be a matchup in the second round in the East. Please, let it happen for the fans. Ulis was first-team All-American by USA Today; Ferrell was second team.