Four on the Floor: Big Ten tourney moves to semifinals 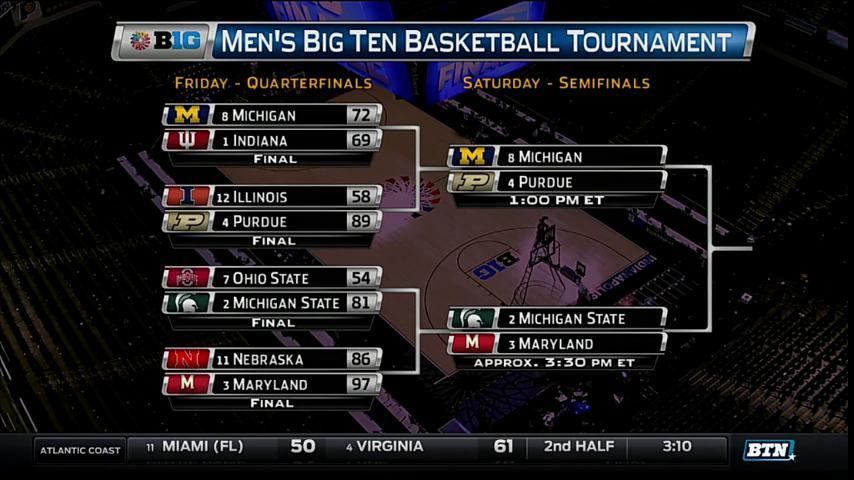 Friday can be summed up as the ?Buzz-beater and the Three Blowouts.? Purdue (Illinois), Michigan State (Ohio State) and Maryland (Nebraska) all took care of business in impressive fashion. Michigan provided the thrills by knocking off No. 1 seed Indiana with a game-winning shot with 0.2 seconds left.

The final four of the Big Ten basketball tourney is set, with No. 4 Purdue taking on No. 8 Michigan in one semifinal and No. 2 Michigan State battling No. 3 Maryland in the other.

Biggest surprise: Michigan. Who saw the No. 8 Wolverines playing on Saturday? No one. Michigan came to this event needing some big wins to get an NCAA bid. Mission accomplished with the triumph vs. Big Ten champ Indiana. Now, how far can Michigan take its surprise party?

Biggest disappointment: Indiana. The Hoosiers arrived in Nap Town as the No. 1 seed and undisputed Big Ten champ. But they were one-and-down after getting stunned by Michigan. IU still never has won the Big Ten tourney, and it has reached the title game just once. Oh, and the Hoosiers have reached the semis only once since 2007.

Top moment: With the game clock winding down in a tie contest, Derrick Walton dribbled seconds off the clock. The ball quickly found Kameron Chatman in the right corner. And, he didn?t look like he wanted to shoot. But, Chatman let it rip ? and the ball splashed through the net with 0.2 seconds left to give Michigan a 72-69 win. It was just the second hoop of the game for Chatman. Before the game winner, Michigan?s Duncan Robinson tied the game with a 3-pointer from the other corner, which was followed by an IU turnover that set up Michigan with a chance to win.

Top stat line: Maryland?s Jake Layman was on fire coming out of the locker room. He hit his first five shots and first four 3-pointers in tallying 14 first-half points to lead the charge for the Terrapins. Layman finished with 26 points, hitting 6-of-9 from 3-point land with five rebounds.

Top stat: 59.1 percent. That is what Maryland shot from 3-point range in dispatching Nebraska. The Terps hit nine-of-10 in the first half in racing to a 54-37 lead and hit 13-of-22 from beyond the arc for the game.

Top dunk: Indiana?s Thomas Bryant went flying down the lane for a monstrous one-handed slam early in the second half. And Michigan?s Mark Donnal answered with a two-handed flush at the other end in an exciting sequence. The roof nearly came off the arena in that 30-second span.

Did you see this? If you didn?t know it was March yet, you do now. The zaniness continued at the Big Ten tourney after a wild Thursday that saw double-digit seeds Illinois and Nebraska advance. This time, it was Michigan pulling the shocker with a 72-69 win vs. No. 1 seed Indiana. The mob of players that surrounded Kameron Chatman after his game winning shots is what makes March the most beautiful month of the year.

?I knew that we were what coach calls double-eyeballing, and I knew I was going to be in the corner. And so I told myself that I was going to be ready to shoot it. But I didn't think Derrick was going to pass it to me, and he ended up passing it to me. And I hesitated a little bit, but then seeing how much time was on the clock, and then I just let it go. It felt good when it left my hands, so it was pretty good.? – Michigan?s Kameron Chatman on his game-winning shot

?We knew Chatman. He hasn't played a lot, but we knew he's capable of making threes. And he had too open of a look, and it was his moment to hit it. But the Robinson three is the one that hurt us because we just weren't as good in coverage. And we wouldn't have won this championship if we weren't pretty good in our defensive coverages. Like I said, unfortunately, when you're not as great during the game, it over-magnifies the very end.? – Indiana?s Tom Crean after the loss to Michigan

"When I pack it in some day and I just look back at all the great shots I've been a part of, I will remember that one a lot." – Michigan?s John Beilein on Kameron Chatman?s big shot

?We threw everything at them but the kitchen sink trying to make adjustments and alter things during the game. They're playing at a high level. Like I said, I saw that in their last game that they played when they had 91 points there at home. I thought, oh, boy. When they shoot the ball like that from the perimeter and then you have those guys inside, it really puts you in an unbelievable dilemma. And today, obviously, they were the better team, clearly the better team.? – Illinois coach John Groce on Purdue