BTN LiveBIG: Thanks to UM and MSU, Flint finds hope amid crisis 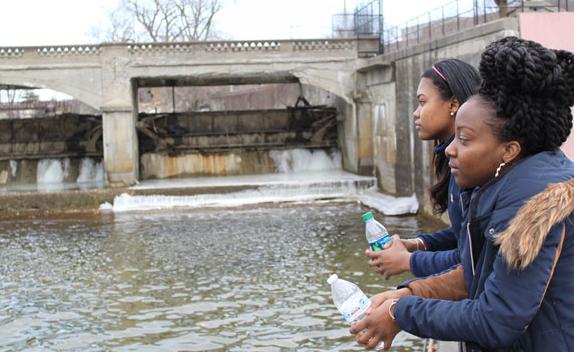 Last fall, most people in the state of Michigan were closely following two storylines: the Spartans football team?s run for the Big Ten crown, and new Wolverines head coach Jim Harbaugh?s restoration of that program to glory.

But football wasn?t the most important thing on the mind of Dr. Mona Hanna-Attisha, assistant professor of pediatrics at Michigan State University?s College of Human Medicine. Following a trail of anecdotal leads and previous research reports, Hanna-Attisha and her colleagues launched an intense investigation into the rate of lead poisoning among the children of Flint, Mich.

?We did our research in two weeks,? she said. ?We didn?t sleep. We had to get this information, and we had to alert the public of the potential harm.?

What they found was stunning: The number of children in Flint who tested positive for lead poisoning had spiked dramatically from previous examinations. This led Hanna-Attisha to the inescapable conclusion that the water supply was contaminated, which she announced at a press conference last September.

?When you see the consequences, it?s not something you mess around with,? she explained. ?Lead disproportionately affects the youngest, most developmentally vulnerable - babies who aren?t even born yet and babies on formula. Everybody was affected, every adult, every child, but it?s the littlest ones who we care about the most because that?s when their brains and their nervous system are developing.

?Lead is a neurotoxin. The CDC [and] the American Academy of Pediatrics say there is no safe level of lead because of what it does in the long-term. It impacts your cognition and your behavior. Lead has even been linked to criminality. So, it has these multigenerational impacts.?

Many state and municipal leaders initially disputed those findings, and made little to no effort at first to address this issue. Isaiah Oliver, a 34-year-old lifelong resident who serves as vice president of Community Impact at the Community Foundation of Greater Flint, was one of many people who had their faith in the system shaken because of that response.

?Dr. Mona Hanna-Attisha?s research coming out was a wake-up moment for everyone,? he said. ?For many in our community, they?ve lost hope and they?ve lost trust. It?s going take some time to rebuild that trust in systems and in different levels of government.?

Karen Vance, who?s raising her 10- and 12-year-old daughters in Flint, had a similar response to Oliver?s.

?The Water Department was sending us letters at home telling us, ?It?s time to boil your water. There?s an advisory,?? she said. ?Then, it would be followed with, ?Calm down, it?s okay, it?s alright.? I went to a lot of the advisory meetings that talked about the lead, and I believed in the leaders that were elected.

?It was very hard for me to comprehend that I was misled ? that there was a danger in what I was giving my children,? Vance added. ?I grieved, I actually cried for days, because I can remember filling my daughter?s water bottles for sports activities, filling the ice trays, and thinking it was okay.?

Both Oliver and Vance pointed out that this ?vacuum? of trust created by the mismanagement and insensitivity of public officials was partially filled by the heroic and swift response from Michigan State and the University of Michigan.

The University of Michigan-Flint has also been involved in recovery efforts since the very beginning, providing both expertise and hard work to address its hometown's short- and long-term needs. The campus hosted the first major water-filter giveaway, its students have delivered water door-to-door, and researchers have provided analysis to identify where lead pipes likely exist.

Additionally, nursing students have been working in clinics conducting lead screenings and speaking with families about health concerns. One shining example is that of Jennifer Dunsky, a fifth-year nursing student at U-M?s Flint campus.

Since news of the crisis broke, Dunsky has spent countless hours working at clinics, where she?s conducted lead screenings, answered questions about health concerns, and educated patients about nutrition and treatment.

?As a community nurse, we?re here to help [the] population, as opposed to individualized care that you would get in a hospital,? she explained. ?Usually, community nursing is more primary prevention, where we educate families because we don?t want to see chronic diseases and things like this happen. We?re at the screening point, which is a secondary prevention, so we can help by offering these lead clinics. When the client gets their result, then we have them follow up with their primary-care physician.?

Dunsky said the people she?s seen have been happy to receive any kind of guidance for dealing with this issue.

?You can sense concern, but they?re receptive to the information that we?re giving them,? she said. ?They can be involved in their children?s diet as far as telling them what types of foods they should eat to reduce the absorption of lead, like foods high in calcium, iron, Vitamin C. We?re giving them recipes that they can use at home.?

In these acts of service, Dunsky has gained profound, valuable lessons in her chosen field.

[btn-post-package]?I always envisioned nursing as one-on-one care in the hospital,? she said. ?This has really opened my eyes to see a population problem, and how we can come together as a community. As nurses, we have the opportunity to choose how we would like to give back, and there?s no better feeling than to be able to educate. I feel good during that drive home at night, knowing that I did something to help.?

Tomorrow, we?ll look at long-term solutions to this crisis being developed by Michigan State and the University of Michigan. In the meantime, you can watch a one-minute video on their work here.

To provide financial assistance toward recovery efforts, go to flintkids.org.