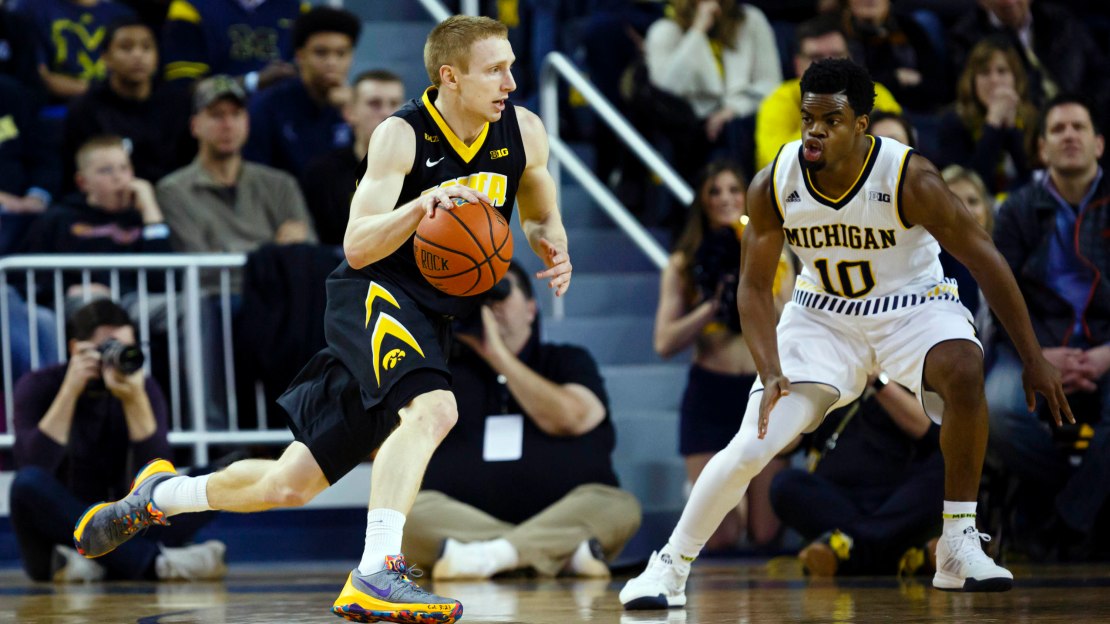 Before the slate of four games starts, I wanted to take a quick look at three players who I think you should watch.

Mike Gesell, Iowa. Obviously Jarrod Uthoff and Peter Jok have to play at a high level if Iowa wants to advance past Illinois and make a March run. Uthoff and Jok are the second-highest scoring duo (34.6ppg) at Iowa in the last 40 seasons. But the reason they get so many clean looks at the basket is because of the precision passing of their senior point guard. Gesell, the third Hawkeye to amass 1,000 points, 525 assists and 150 steals, is a terrific on-ball defender and has to stay in front of the quick Illinois guards. More importantly, Gesell needs to knock down his open jumpers and make free throws down the stretch.

Alex Olah, Northwestern. Tre Demps and Bryant McIntosh have to shoot lights out Thursday against Michigan if Northwestern is going to pull the upset. Demps has been on fire lately, averaging 17.8 points over the Cats' last five games while shooting an efficient 46.5 percent from the field. But Olah has to continue his inspired play, as well. When super-sophomore Vic Law's season was lost to injury and Olah was also sidelined with injury, Northwestern's NCAA tournament hopes came crashing down. Olah has looked healthy down the stretch, though, and his conditioning has improved. Demps is playing well because Olah is a threat to score and his dribble handoffs create confusion for opposing centers and guards. In the lone regular season meeting between these two teams, the Cats led for 28 minutes due to the Olah's 19 points. He will have to be in double figures if Northwestern wants to gain revenge.

Shep Garner, Penn State. The Nittany Lions closed out the regular season winning five of their final eight games, including a double-overtime win over Illinois in the finale. But the last time Ohio State and Penn State battled, the Buckeyes dominated in 66-46 win. Garner was only 1-of-9 from the floor in 30 minutes of play. If Penn State is going to be competitive Thursday, Garner has to be great at both ends of the floor and hit big shots from beyond the arc like he did against Illinois. In that game, Garner was 4-of-7 from beyond the arc. Penn State fans are hoping that performance carries over to Thursday.