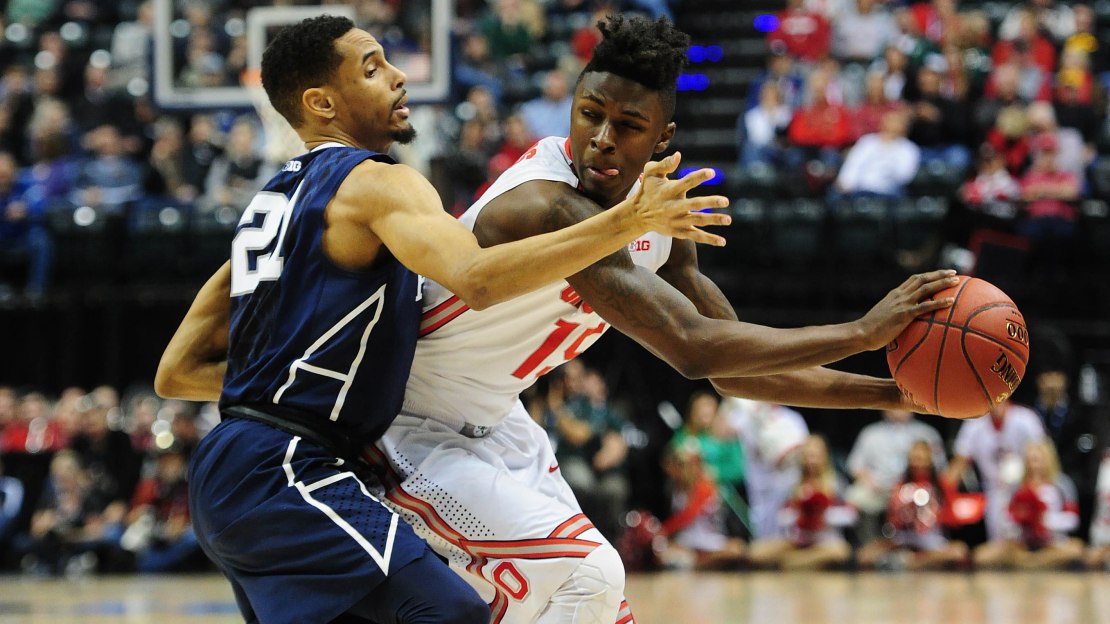 Ohio State likely won?t make the NCAA tourney without winning the Big Ten tourney. Yes, even despite its 11 conference wins and tonight?s triumph over Penn State, the Buckeyes probably need to run the table in Indianapolis to earn a bid because of a low RPI and less-than-impressive resume overall. That dream remains alive with a game vs. No. 2 seed Michigan State next. This will be the third time Ohio State has played Michigan State since Feb. 24. The Spartans blasted OSU the first two meetings, taking 81-62 and 91-76 decisions.

Top star: Ohio State?s Marc Loving enjoyed a strong game, tallying a team-high 24 points. He was 4-of-9 from the field and 13-of-15 from the charity stripe. He also had four rebounds.

Top dunk: Midway through the first half, Ohio State?s Trevor Thompson slammed down a one-handed dunk off an alley-oop pass from JaQuan Lyle. Thompson added a sweet two-handed flush in the second half.

JaQuan Lyle with the alley, Trevor Thompson with the oop on this one-hand @OhioStAthletics slam. #MarchOnBTN? https://t.co/finFdDsEvp

It was over when: Ohio State went on a 23-4 run to take a 48-39 lead in the second half after trailing 37-34 at halftime. Penn State tightened it up. But the Buckeyes used a late seven-point run late and hit their free throws to put the game away after the Nittany Lions had drawn to within three points late.

Notable: Ohio State has played in more games in the Big Ten Tournament (29) than any other league school since Thad Matta took over in Columbus 12 years ago. The Buckeyes also have the most wins (22) with the next closest being Michigan State with 16. Ohio State?s winning percentage of 75.9 (22-7) also tops all league schools. … OSU has won six of its last eight games. But both losses were to its next foe ? Michigan State. … PSU finishes by losing for the third time in seven games, as it finishes its season 16-16.