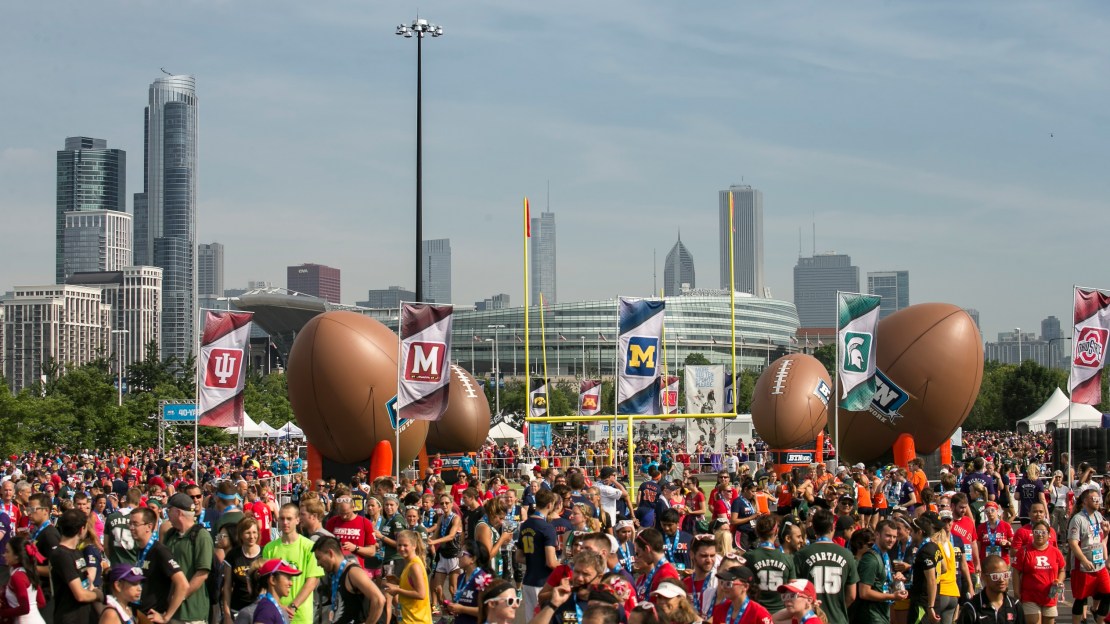 Registration is now open for the summer race that turns Chicago into a Big Ten tailgate party. The fifth annual BTN Big 10k takes place on Saturday, Aug. 6, and is back with a fresh look on a new course in 2016.

The new 10k course, with a start and finish in Chicago?s iconic Grant Park, allows runners to traverse the Windy City?s famed streets with views of Buckingham Fountain, Lake Michigan and Chicago?s world- renowned skyline. Also new in 2016, the first 1,000 runners to sign up will receive a custom, Big Ten-themed water bottle. The water bottle, with a retail value of $35, features the mascots and logos of all 14 Big Ten schools and keeps liquids cold for 24 hours or hot for 12 hours.

Registration is now open and starts at $53 for adults for the 10k and $43 for the 5k. For children 12 and under, registration is $25 for the 5k. For all additional information on the BTN Big 10k, visit www.BTNBig10K.com. Those who register on or before July 17th are guaranteed an official gender-specific race shirt in their favorite school?s colors. The race shirts are available in each of the 14 Big Ten school colors, as well as a BTN Fan shirt for those who may miss the July 17th cut off.

In 2015, nearly 14,000 runners from 42 states and seven countries represented their Big Ten University. Special Olympics Chicago is the 10K?s charity partner for the fourth-consecutive year.

The 10k will include participation by top area runners and award-winners from previous years? events, as well as many former varsity student-athletes from Big Ten schools. Awards and cash prizes will be presented to the top five male and female 10k finishers overall. There will also be a cash prize for the top male and female runners who are alumni of a Big Ten university. Additional prizes will be awarded to runners who show the most school spirit through festive costumes and school-inspired accessories. Every finisher of the 10k or 5k will receive an official BTN Big 10k commemorative medal, which will feature a new design for 2016.

The 10k will once again be followed by a Tailgate Party, which will include music, football-themed games and activities, such as corn hole, field-goal kicking and the 40-yard dash, as well as appearances by BTN talent and former Big Ten athletes. Additionally, the tailgate party will include tents hosted by the Chicago Big Ten Alumni Associations along with food and beverage concessions. Each race finisher 21 and older will also receive a free beer.