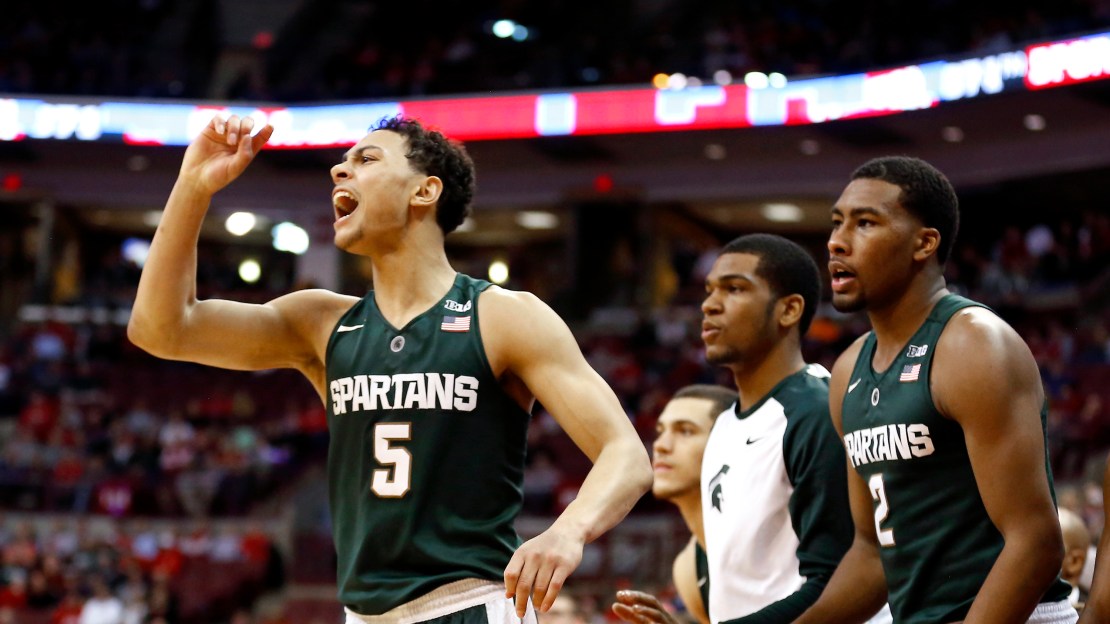 As the regular season came to an end Sunday night and the Big Ten tournament bracket was finalized, I realized that this would be my last submission of Big Ten Power Rankings, presented by ArcelorMittal.

In no way does that sadden me, because coming up with justifiable list every week is more difficult that you may realize. Throughout the season, I spend a great amount of time with coaches, players and staff, and I do my best to get to know as much as possible when it comes to basketball in this conference. I can honestly say that there isn?t a program, a player or a coach in this conference that I don?t root for. We are lucky to have such great coaches, great players and great fans at Big Ten institutions.

Anyway, here?s what I?ve got for my final list.

1. Michigan State (26-5, 13-5). The Spartans can win in a variety of ways. They can grind out games and execute in the half court, and they can run with anyone in the country – even Indiana. Their depth and the development of Deyonta Davis makes them even more dangerous on the defensive end. Tom Izzo and Denzel Valentine will lead this team deep into March.
Last week: 1

2. Indiana (25-6, 15-3). The Hoosiers took advantage of the unbalanced schedule and have continued to improve while being faced with adversity in the form of injuries and early season failures. Credit Tom Crean for staying true to who they are and trusting the process. Credit Yogi Ferrell for being a winner. He makes this team great.
Last week: 2

3. Maryland (24-7, 12-6). The Terps have not played their best basketball yet, but they?re still one of the most dangerous teams in the league. Their size, versatility and depth make them dangerous, but their inconsistency makes them vulnerable. I still think Mark Turgeon and Melo Trimble have a run left in them.
Last week: 5

4. Purdue (24-7, 12-6). If P.J. Thompson, Dakota Mathias and Ryan Cline can make perimeter jump shots, it will be hard to beat the Boilermakers. A.J. Hammons and Isaac Haas are the two most efficient and effective scorers in the country per 40 minutes of play. That type of consistency in the post makes them a tough matchup in March.
Last week: 4

5. Wisconsin (20-11, 12-6). There?s no question anymore as to whether the Badgers are for real or not. It took Purdue shooting 60 percent from the field to beat the Badgers on Sunday night at Mackey Arena. They do a great job staying in games and giving themselves a chance to win down the stretch. EthanHapp and NIgel Hayes are some of the toughest players to match up against because of their ability to make plays in the post and get to the foul line.
Last week: 3

6. Iowa (21-9, 12-6). A lot of people have jumped ship on the Hawkeyes. I will not. I was wrong about them in the beginning of the year, as I wasn?t yet sold on a team that clearly lacked depth. Jarrod Uthoff and Peter Jok are pros, and Iowa will go as far as they can take them. I also think Mike Gesell could do more on the offensive end. He?s a terrific passer, defender and does a great job taking care of the ball and setting the tone for the Hawkeyes.
Last week: 6

7. Ohio State (19-12, 11-7). The No. 7 and No. 8 spots are a bit of a toss-up between Ohio State and Michigan. I just think the balance and length of the Buckeyes gives them the edge. They are extremely young and will be a serious Big Ten contender next season. They have to get hot and make a run in the Big Ten Tourney if they want to dance in March.
Last week: 8

8. Michigan (20-11, 10-8). You can?t say enough about the job that John Beilein did this season without Caris LeVert and Spike Albrecht. LeVert is a first-round draft pick, and Albrecht is a great leader with a ridiculous assist-to-turnover ratio. Derrick Walton Jr. has done a great job at the point and will emerge as this team?s leader going forward. The combination of Walton and Robinson will be very effective and tough to match up against.
Last week: 7

9. Northwestern (20-11, 8-10). If not for injury and some close losses, the Wildcats may have been dancing this year. The recent play of Tre Demps has made Northwestern a very good team. Demps, Bryant McIntosh and Alex Olah are a tough bunch to stop in pick-and-roll and pick-and pop-situations. They still may be able to cause some trouble in Indy.
Last week: 9

10. Penn State (16-15, 7-11). Pat Chambers and the Nittany Lions are fighters, in the best sense of the word. They compete, no matter what, and that is what makes them so tough to face. Chambers and staff will have to develop an offensive system to showcase the talents of Shep Garner, Josh Reaves and the talented class coming to campus next season in order for them to reach their true potential.
Last week: 10

11. Nebraska (14-17, 6-12). Even though I have the Huskers at No. 11, they may be one of the more dangerous teams in the conference that is ranked below 6 or 7. Shavon Shields is such a tough matchup and everyone in the conference knows how dangerous and good he is. Tai Webster, my sixth man of the year, should be even more aggressive as he has emerged as a true threat and a dynamic playmaker.
Last week: 11

12. Illinois (13-18, 5-13). Like the Huskers, The Illini have matchups that make them dangerous. Clearly Malcolm Hill and Kendrick Nunn are lethal scorers, but the development of Jalen Coleman-Lands and Maverick Morgan add balance to the mix. As I?ve said before, at full-strength, this is a top-25 team and Hill is in the discussion for Big Ten Player of the Year. We?ll save that for next year though. Hang in there, Illini fans.
Last week: 12

13. Rutgers (7-24, 1-17). The Scarlet Knights make the jump out of the cellar because of the dismissal, suspensions and injuries at Minnesota. Corey Sanders and Mike Williams are two tough guards, while health in the front court next season will allow Rutgers to compete much more consistently.
Last week: 14

14. Minnesota (8-22, 2-16). The suspensions of three key players, the prior dismissal of Carlos Morris and now the injury for Joey King have all but ended the season for the Gophers. The hope is that accountability will help maintain and build culture for this program moving forward. Especially with a top 3 (in the conference) recruiting class coming in next fall.
Last week: 13