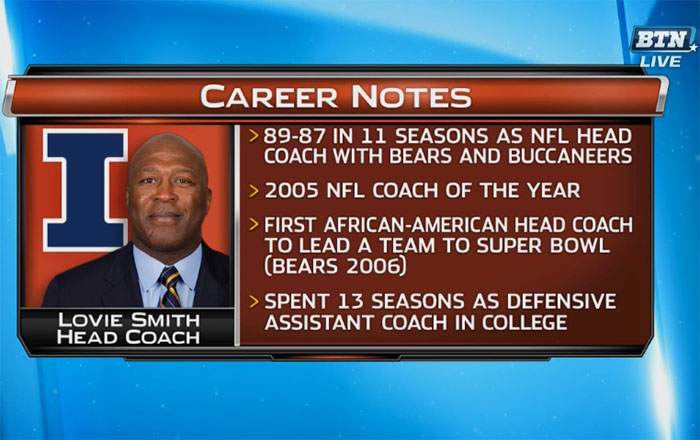 The future is now. No sense in waiting to turn the page. It?s all about authoring a better tomorrow in Champaign for a consistently underachieving program. So, Whitman felt Cubit wasn?t the future. And, he acted. With lightning speed and authority by inking Smith to a six-year deal that will pay him $2 million annually for 2016 and 2017, $3 million for 2018, $4 million for 2019 and $5 million annually for both 2020 and 2021.

Bold? No doubt. Shocking? Yep. A gamble? You betcha. But, all big moves in life come with risks.

Whitman is just 37 years old with minimal experience. But he knew letting Cubit work this season on a two-year deal was doomed to fail the moment it was inked and would do nothing to advance a football program that is waning.

Enter Smith, who brings instant credibility to place that needs a mega dose of it.

Illinois hopes the soft-spoken player?s coach is an elixir for what ails a program that?s trying to be something, to become a contender. The Illini have had bleeps of success in the last 50 years, advancing to the Rose Bowl after the 1983 and 2007 seasons and making the Sugar Bowl in the 2001 season. But, those high points never lasted for a program with just 16 winning seasons since 1965.

Smith, who turns 58 in May, will be the school?s eighth coach since Mike White took over in 1980. Smith also will be the school?s first African-American coach, and just the sixth in Big Ten annals, joining Dennis Green; Bobby Williams; James Franklin; Francis Peay; Darrell Hazell.

But, most vital: Will he be the one to push this perennially underachieving football program into contention?

Illinois probably never may be on par on a yearly basis with schools like Ohio State and Michigan. But, why can?t the Illini be a program that?s on a similar success scale as Wisconsin and Michigan State? Illinois can, but it will take an investment in the program?s facilities and resources, a commitment from university leadership ? and great coaching by Smith, whose NFL cachet no doubt should resonate with recruits. And, make no mistake about it: college sports are all about recruiting. In case you forget, just witness the antics of Jim Harbaugh at Michigan.

Illinois is a program steeped in history and tradition, the place where legendary Red Grange came to fame and Dick Butkus became the most feared linebacker in football history. You can win in Champaign, people. This is a great academic school that sits in a populous state. There is a lot to sell.

Smith last coached in college in 1995, when he was defensive backs coach for Ohio State. After that season, he moved on to the NFL where he spent the next 20 seasons working with the Buccaneers, Rams and Bears. Smith was head coach of the Bears (2004-12) and Buccaneers (2014-15), forging an 89-87 record and taking the Bears to the Super Bowl in the 2006 season.

Smith will need to build a staff that can compensate for his lack of collegiate experience. Don?t get too hung up schemes, etc. The big key, again, will be recruiting. Smith will need someone to spearhead this vital task, someone who thinks outside the box and can push the envelope in an ever-evolving recruiting world that is hyper competitive. No doubt, Smith will be impressive in the living rooms of kids.

Smith is the latest coach to make the jump from the NFL to college in recent years. And he hopes to copy the success that guys like Pete Carroll (USC), Jim Mora Jr. (UCLA) and Nick Saban (Alabama) have had. Smith came to fame as defensive coordinator of the Rams during their run to the Super Bowl in the 2001 season. That helped earn Smith the head coaching job in Chicago in 2004. And his career took off.

Smith is second NFL head coach to jump directly to the Big Ten in two seasons, as Jim Harbaugh left the 49ers for Michigan after the 2014 season. Prior to that, the last NFL head coach to come straight to a Big Ten head coaching job was John Mackovic, who went from the Chiefs to Illinois in 1988 after sitting out the 1987 season. (Nebraska hired Bill Callahan from the Raiders in 2004, but the Huskers were still in the Big 12).

Smith will try to pull Illinois out of the morass as the program comes off a 5-7 season that inspired no one. He has some talent to work with-but not enough–and his depth is minimal. The hot spots for the program this spring are the offensive line, linebackers and secondary. The good news for Smith: The Big Ten West isn?t a huge mountain to scale. Illinois can get competitive quickly.

It?s time for Smith to go to work.