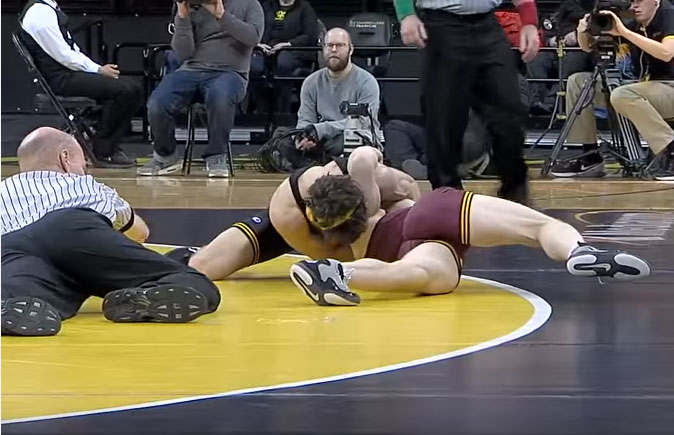 If walls could talk, the ones at Iowa City's Carver-Hawkeye Arena would surely tell some amazing stories. Opened back in 1983, the arena's tales would recount the countless team and individual battles and milestones of those who wore the black Iowa singlet. The arena would boast about the many times it flexed its muscles and stood firm as the noise threatened to bring its walls down.

How about the 2001 NCAA Championships when the Minnesota Gophers had an unprecedented 10 All-Americans to give J. Robinson and Minnesota their first-ever team title? What about in 1995 when Illinois' Steve Marianetti beat Iowa's Lincoln McIlravy at the NCAA Championships. Maybe it would reflect back to 2005 when Iowa last hosted the Big Ten Championships and finished fourth as Illinois took the crown.

New stories will happen at Carver-Hawkeye Arena Saturday and Sunday when Iowa once again hosts the Big Ten Wrestling Championships where the best wrestlers in the country  will toe the line.

I started looking forward to these championships the moment I left Ohio State's St. John Arena last year when the Buckeyes and Hawkeyes split the conference title with a tie. I think back to Ohio State's Johnni DiJulius putting Jimmy Gulibon on his back and winning 7-3 to secure his place in the third-place match. Hunter Stieber winning two matches for Ohio State after missing all season because of injuries. Huge wins for the Buckeyes!

It all came down to the last match of the entire tournament with Northwestern's Mike McMullan coming from behind to beat Iowa's Bobby Telford 4-3. McMullan could have ran for mayor of Columbus that day. All those things were easy to predict, right? We all saw those things coming, right? You can't make this stuff up! There were close to 250 matches wrestled and it was a tie? I will continue to preach how every single second inside that circle matters. Every second!

What makes this sport so unique and exciting is that anything can happen. We see it time and time and time again. Anything can happen inside that circle on any given day. You have got to earn it on the mat. As Iowa coach Tom Brands says: "I don't make predictions." I also have never been a big fan of predictions, and they certainly don't get you a single point on the scoreboard.

Everything is settled on the mat.

As always this tournament is littered with highly ranked guys at all 10 weight classes. Penn State comes in with four guys ranked No. 1, and that makes me expect this to be a three-team race for the title between Penn State, Iowa and Ohio State. What really makes this a dog fight is that every team has an individual or two that could play a big part in how the team race plays out. Look at McMullan last year. When you have a tournament field loaded with this much talent things can turn on a dime. Everybody is a threat and if aren't ready you are playing with fire.

These high-stakes championships will get chippy from the first whistle Saturday morning. You better have a high level of urgency. Preparation, position, pace, physicality, pressure, poise, purpose and perseverance will all play key roles.

The last several years I keep thinking the excitement won't get any better, and then every year I'm proven wrong. It blows my mind! I don't expect a team race like last year, but who knows? The individual battles will be off the charts.

Keep an eye out for these potential matchups:

As a wrestling fan, I recall first Big Ten Championships I attended. It was 1992 in Madison, I was 16 years old, and I will never forget the 118-pound final. My favorite college wrestler, Chad Zaputil of Iowa took a huge win over Wisconsin's Matt Hanutke. Then at 177 pounds, the Hawkeyes' Bart Chelesvig battled and lost to the late Kevin Randleman of Ohio State.

Clearly, that tournament had a big impact on me and really helped launch my love and passion for this sport. This weekend will do the same for other young fans who make the trip. My brother, his wife and their three young boys are making the trip from Wisconsin. Imagine the thoughts going through their young minds as they watch and hear the crowd and wrestlers at Carver-Hawkeye. They will never forget this.

This is always a special weekend. Don't miss it! As Axl Rose and his band Guns N' Roses blasted out back in March of 1993 inside Carver-Hawkeye Arena: "Welcome To The Jungle!"