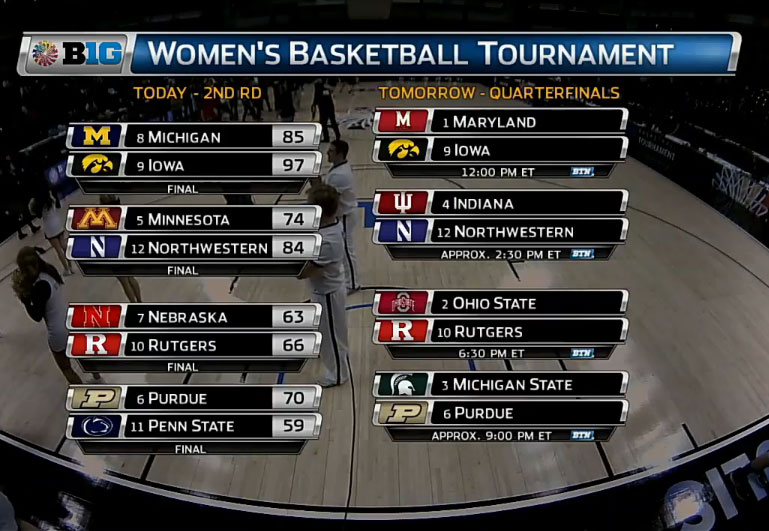 And then there were eight as No. 6 seed Purdue and No. 10 seed Rutgers both won Thursday night at the Big Ten Women's Basketball Tournament to advance to Friday's quarterfinals. Rutgers held on to upset No. 7 Nebraska, 66-63 before the Boilermakers topped No. 11 seed Penn State, 70-59. Earlier Thursday, No. 12 seed Northwestern won for the second time in two days stunning No. 5 seed Minnesota, 84-74,  while No. 9 Iowa topped No. 8 Michigan, 97-85, and advances to play No. 1 seed Maryland on Friday.

Here are Friday's matchups with all games airing live on BTN TV. Use the links to watch all four games live on BTN2Go.

Game 5 – No. 10 Rutgers 66, No. 7 Nebraska 63:Shrita Parker scored 18 points and 10th-seeded Rutgers came back from eight points down late. Kahleah Copper had 17 points and nine rebounds for the Scarlett Knights, who move on to face second seed and No. 9-ranked Ohio State in a quarterfinal game on Friday. BOX SCORE | RECAP

Game 3 – No. 9 Iowa 97, No. 8 Michigan 85: Megan Gustafson had a career-high 25 points with 10 rebounds, one of three Iowa players with double-doubles. Megan Coley had 20 points and 10 rebounds – with career highs of six blocks and six assists – and Tania Davis had 10 points and a career-high 10 assists for the Hawkeyes. Ally Disterhoft made all four of her 3-pointers and had 22 points. BOX SCORE | RECAP

Find highlights via these links