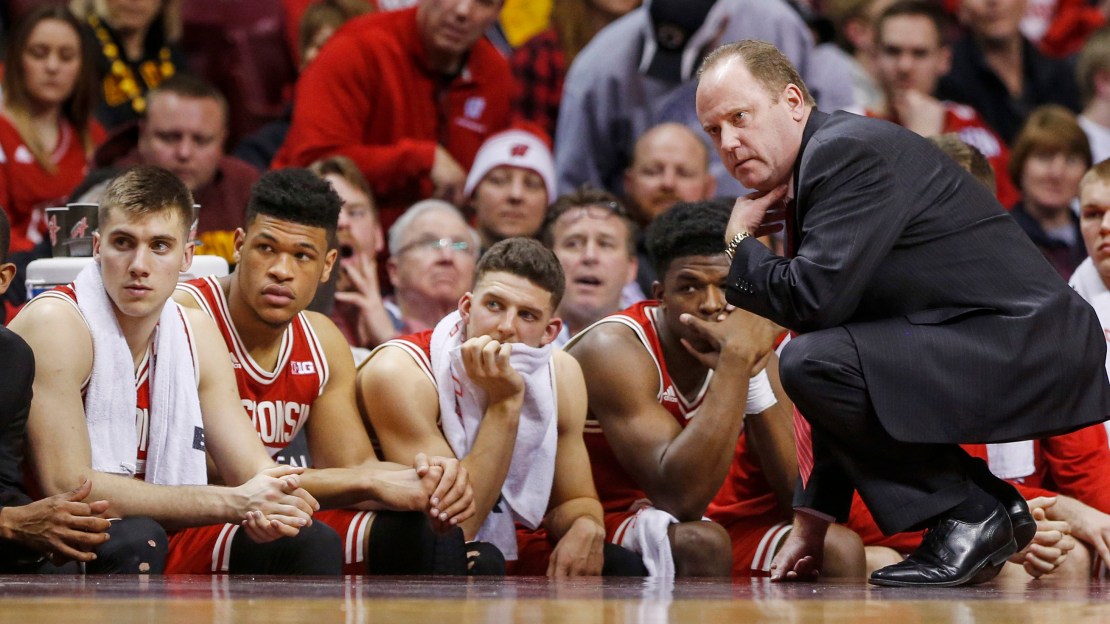 Some good news from Wisconsin: Jeff Potrykus reports that Greg Gard could get an offer of a long-term contract soon. He's certainly racked up the endorsements, as Madison.com reports.

How can you not be impressed with what Gard has done? The guy has had to audition for the job. And he has been spectacular. If not for Tom Crean?s great run at Indiana, Gard would be Big Ten Coach of the Year.

So, the Ivy League says it will eliminate hitting in practices.

Bold move and a popular move in the public arena, I am sure, what with the uproar about the toll this violent sport of football takes on people. Now, we sit, watch, wonder and wait. Who will be the first league to do this in FBS – if at all? Or will it stay only in the Ivy League?

Those accuracy issues that plagued Christian Hackenberg at Penn State? They were due to the beating he took behind a feeble line, according to ex-NFL G.M. Bill Polian.

Hackenberg took 83 sacks in his sophomore and junior seasons, which impacted his accuracy and mechanics, Polian told Pennlive.com.

"Hackenberg has got mechanical issues that I think need to be straightened out," Polian said on ESPN's 'Mike and Mike' Monday morning. "That's a result of the terrible beating he took at Penn State this year. I've never seen a quarterback survive the kind of beating that he took this year. The fact that he did is to his credit, but he needs some developmental work because when you take a beating like that, your mechanics go all to heck."

I think Hackenberg will be A-OK in the NFL, as he just wasn?t a fit for what James Franklin was doing on offense.

Others expected to be on the show, according to ESPNFrontRow.com, are Jared Goff (California) Carson Wentz (North Dakota State), Connor Cook (Michigan State), Christian Hackenberg (Penn State), Paxton Lynch (Memphis) and Dak Prescott (Mississippi State). Jones will be one of the more interesting prospects to have ever appeared on the show because his time as a starter at Ohio State was limited to only 10 games, all of which he won.

Work has begun at spring drills for Minnesota, where the Gophers have to replace another top pass catcher. This time, it?s KJ Maye.

Tracy Claeys isn?t worried about a replacement. In fact, he says Minnesota will be ?awfully good? at receiver, which hasn?t been a great spot in Dinkytown in years. Drew Wolitarsky is the primary candidate to become the No. 1 pass catcher for what could be a surprising good corps of wideouts. Wolitarsky was second on the team with 39 receptions, 524 yards and three touchdowns last season.

A big spring at Nebraska, where Mike Riley needs to make some strides. Is his team OK in the trenches? Can QB Tommy Armstrong develop? Check out Riley talking all things spring in this video from Omaha.com. Personally, I think NU can win the West.

Iowa has gone from 10-1 in the Big Ten to 11-6, yet they are upbeat. Good for them. Big Ten hopes? Trashed, as the program still has not won a title since 1978-79. The Hawkeyes close the year at Michigan this weekend, a team that needs all the quality wins it can get to polish its NCAA resume. So, another loss could loom for Iowa. The reversal of fortunes in Iowa City have been stunning.

Looks like Michigan?s Jabrill Peppers has a new hybrid LB role. Why not? The guy can do anything.

Nick Baumgardner of Mlive.com says through the first two days of Michigan's spring camp at IMG Academy in Bradenton, Florida, Peppers, the 2015 Big Ten freshman of the year, has played almost exclusively as a strong-side linebacker in new OC Don Brown's new defense. The 6-foot-1, 208-pound Peppers has played in the box. Blitzed. Supported the run. Covered tight ends and covered the slot. His position, as of now, has the word "linebacker" in it. But in name only.

In reality, Peppers is still a hybrid rover in Brown's system because he's the best athlete on the field on every rep.