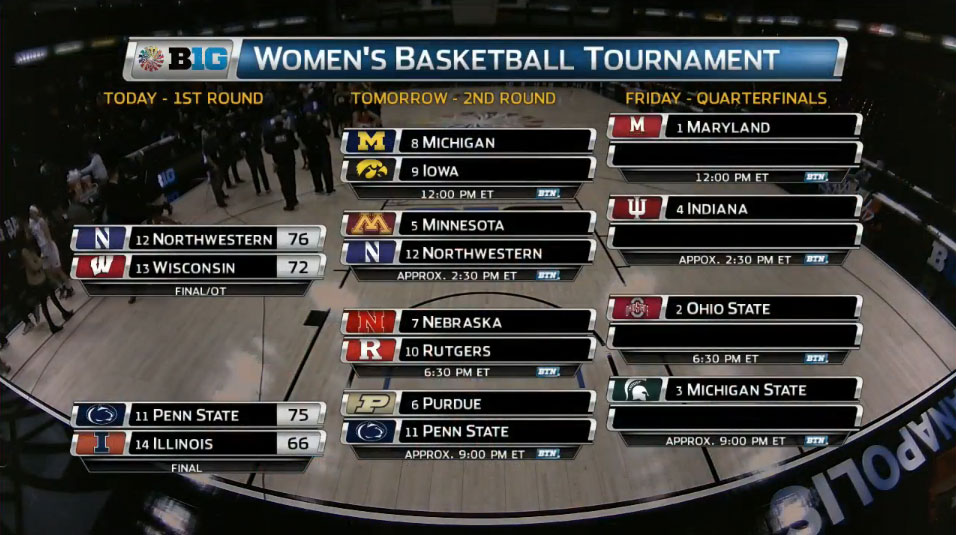 In the opening games of the 2016 Big Ten Women's Basketball Tournament, No. 12 Northwestern edged No. 13 Wisconsin, 76-72, in overtime, and No. 11 Penn State held off No. 14 Illinois, 75-66. Northwestern faces No. 5 Minnesota on Thursday, while Penn State moves on to play No. 6 Purdue. Get set for four more games on Thursday, and all games are available on BTN2Go.

Game 1 – No. 12 Northwestern 76, No. 13 Wisconsin 72 (OT): Nia Coffey and Christen Inman scored 18 points apiece and 12th-seeded Northwestern played without its senior leader Maggie Lyon in a 76-72 overtime victory over 13th seed Wisconsin on Wednesday in the first round of the Big Ten women's tournament. Inman made a layup with 22 seconds left in regulation to tie it at 67-all. Wisconsin called time out, but they couldn't get off a final shot. RECAP | BOX SCORE

Game 2 – No. 11 Penn State 75, No. 14 Illinois 66: Teniya Page scored 18 points, including four free throws in the final minute, and had nine assists to help 11th-seeded Penn State hold off 14-seed Illinois 75-66 on Wednesday in the first round of the Big Ten women's tournament. RECAP | BOX SCORE

Find highlights via these links